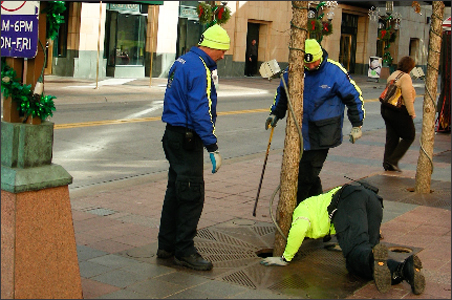 Livability crime is probably the biggest impediment to reviving big-city downtowns. Cities can plant flowers and trees by the truckload. They can hang banners, scrub sidewalks, remove graffiti, put on festivals, build stadiums, open art museums and encourage street vendors — all good things. But those efforts will fail as long as sidewalks are prone to loitering, panhandling, petty drug dealing, public urination, trespassing, intimidation and the like.

Gradually, over the last two decades, cities have begun to understand that small crimes are as important as big ones, and that extraordinary measures are needed to ride herd on the amazingly small number of chronic offenders who can have an amazingly large impact. Not only do they cost bundles of tax dollars to recycle through jail and detox, they deter private investment that would otherwise bring new jobs, shopping, housing and other benefits.

Downtown Minneapolis, after years of spinning its wheels on livability crime, is gaining traction. A new partnership among police, courts, business, social service agencies and citizen groups led to an impressive 74 percent decline last year in crimes committed by downtown’s 50 most notorious offenders. The reduction was part of a larger downward crime trend in the city’s central districts, leading officials to conclude that the new program probably prevented bigger crimes from occurring while keeping smaller crimes from spreading to adjacent neighborhoods.

Called the Downtown 100 Initiative, the new program monitors the city’s most frequent 100 offenders and targets the top 50 for closer scrutiny. The idea is not just to arrest, prosecute and recycle back to the streets but also to intervene with housing, drug treatment and mental-health evaluations aimed at the root causes of small-time criminal behavior. Beat cops were initially skeptical of just another “hug a thug” program. Judges, at the other end of the spectrum, often failed to see small crimes as a big deal. But results have begun to change attitudes.

“That’s a good return on investment,” Conroy said, referring to the $150,000 grant provided last year by the Downtown Improvement District (DID), the business/city partnership that oversees the cleaning and greening of sidewalks in the downtown core. Among other things, the grant paid for an additional prosecutor and an additional probation officer to pursue chronic offenders. “The DID is making a huge difference; downtown has never been cleaner, safer or greener,” Conroy said.

The added staff made possible what she calls “vertical prosecution,” a process that allows teams of police, courts and community officials to personally confront and help chronic offenders.

Last Friday I got a chance to see how it works. Conroy presided at the monthly meeting of Downtown Court Watch at the Central Library. About 40 people, including First Precinct Inspector Kris Arneson, attended, as did other police officers, courts officials, business representatives, neighborhood leaders and social workers representing St. Stephen’s Human Services, Catholic Charities and the Salvation Army. The main business was to discuss, one by one, 35 of downtown’s top livability criminals. Each was discussed as his or her photo was projected on a large screen.

• B.M. was typical. The 29-year-old white male has been arrested or confronted by police 43 times in Minneapolis in the last 10 years for drunkenness, trespassing, assault and disorderly conduct. He is “geographically restricted” from downtown. “He can ride through on a bus or train but he can’t get off,” a probation officer explained. He was supposed to check in last week but skipped the meeting. He was last seen on Franklin Avenue.

• F.T.  has been arrested or confronted 97 times in Minneapolis, including 16 times last year, for drugs, trespassing and public urination. The 33-year-old black male “needs to be geographically restricted so he can’t enter Block E,” a police officer said.

• T.W. is a 19-year-old black male with arrests for assault, theft, robbery, drugs and trespassing. He has been legally restricted from Nicollet Mall. Still, a courts official advised that “we get community impact statements on him.” That means citizens who have been accosted by T.W. should fill out forms aimed at influencing the judge the next time T.W. appears in court.

Perception is reality
As T.W.’s case illustrates, Conroy and her crew aren’t about to put themselves out of business despite their recent success. The pipeline continues to produce young troublemakers who end up on the sidewalks. Even with serious crime declining, livability problems and images persist. “Perception is reality,” Shane Zahn, operations manager for the DID reminded the group.

What Zahn means is that in order to succeed a street must do more than be safe — it must look safe. Ordinary people must have confidence that they can walk down the block without being hassled or offended. Otherwise business will suffer and residential revival will fail. Here’s a similar way to look at the problem: As private spaces in the suburbs (malls, etc.) become more prevalent, cities must hold their public sidewalks to much higher standards and expectations than in the past if downtowns are to compete and succeed. That’s why you see so many downtown beautification programs across the country, and so much emphasis on clean and safe public places.

New York’s transformation
Probably the most dramatic turnaround has come in New York. Street life in Midtown Manhattan in the 1970s and ’80s had reached a critical low point. Sidewalks were littered, subway trains were filthy and covered with graffiti, street crime was rampant, corporate headquarters were threatening to leave town.

The city employed the “broken windows theory” to attack the problem. The theory states that small things left unattended (like broken windows, littered sidewalks, loitering or petty crime) quickly become big things. Turning a city around requires both a strong hand and a soft heart. Attention must be paid to seemingly minor details of both police work and social work.

I wrote about the transformation in 2006 for the Strib, hoping that some of New York’s spirit would rub off on Minneapolis; that, as in New York, ordinary people would not run away but confront the problem head on and do the hard work of taking back their sidewalks. Thanks to leaders like Lois Conroy and her partners, progress is being made. Now it’s investors’ turn to respond. We’re still waiting for the new stores, office towers and apartment buildings to appear.