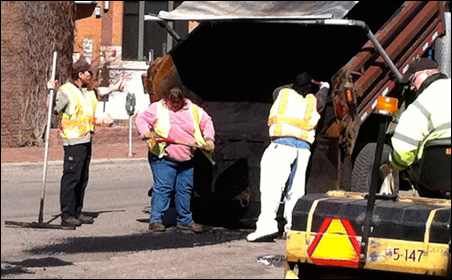 MinnPost photo by Steve Berg
For two decades Minneapolis has been cutting back on street maintenance to the point that hundreds of roads are now in critical condition.

What are the signs of spring? Poets tend to dwell on the reappearance of flowers and birds, the return of soft earth and warm breezes. “Can words describe the fragrance of the very breath of spring?” asks the nature writer Neltje Blanchan.

Spring, in all its splendor, appeared outside my window this week, and my heart leapt for joy. There it was! A pothole crew, all decked out in spring colors; the shiny blue dump truck; the yellow rolling machine; and the husky guys with shovels moving smartly in their festive orange vests. As for the fragrance, there’s nothing like the smell of hot asphalt in the morning!

These last weeks, especially, I’ve had to dodge a line of killer potholes next to our building as well as other real beauties along my regular routes. I don’t recall the streets ever being so rough. Returning from a recent trip to the Sun Belt, where the roads were smooth and beautiful, I re-entered Minneapolis wondering if the streets of Mogadishu or Ulan Bator could be as primitive as these, wondering if my tires, wheel assemblies, tie rods and dental work could possibly hold up.

A guilt complex
It’s comforting to know that Steve Kotke, the city’s public-works director, feels just as bad about the pothole situation. Actually, he feels worse.

“I drive around with this guilt complex,” he told me. Kotke regularly cruises the city looking for the worst of the worst. “My wife hates driving with me because I’m always pulling over to look at something or make a note about something that needs fixing.

“Some roadways are just terrible,” he said, naming northbound 5th Avenue as you enter downtown from Interstate 35W and eastbound 6th Street as you head toward Interstate 94 and St. Paul. He could have mentioned a hundred other stretches. “It’s extremely frustrating,” he admitted.

For two decades Minneapolis has been cutting back on street maintenance to the point that hundreds of roads are now in critical condition. Especially over the last decade, as it has absorbed $297 million in local government aid cuts from the state, the city has been forced to choose, essentially, between funding police or streets. And so, the streets have steadily deteriorated, their budget increases lagging those of other departments by roughly 20 percent.

It’s really pretty simple, as Kotke explained it. Like any maintenance issue, you can patch up the problems for only so long before the underlying structure begins to fail.

LGA cuts partly to blame
Kotke doesn’t quarrel with the tough decisions that Mayor R.T. Rybak and the City Council have had to make. Not only has the Legislature returned less and less money to the city, the city has had to pay for some of its past mistakes — excessive inter-agency borrowing in the 1990s and sweetheart pension deals offered to police and fire unions in the 1970s and ’80s.

“I give the mayor a lot of credit for cleaning up the financial mess and keeping our credit rating high,” Kotke said. “I know he feels as badly about the streets as I do.”

The city spends about $7.5 million a year from its general fund on street maintenance, Kotke said, but needs to spend triple that amount just to keep streets in their current deplorable state. It would take four or five times that amount — at least $30 million a year — to make actual improvement, he said. That’s because filling potholes and doing patchwork is relatively inexpensive, but rebuilding a street from the bottom up is extremely costly. That’s what needs to happen here in a lot of older American cities, he said.

“We’re not alone in facing this problem,” Kotke said. “Like a lot of cities, we just don’t have the money.”

Last week, in response to complaints, the City Council found an extra $1 million in a rainy-day fund and earmarked it for extra pothole-filling crews. But again, patching isn’t the long-term solution. The freeze-thaw cycle will create another urban moonscape next spring, and the next. With the Republican-led Legislature plotting yet another raid on the city budget, Minneapolis (and St. Paul, too, which has its own impressive collection of street craters) seems have only two options remaining: Pray for a permanent end to winter, or go back to gravel.

Ah, spring! The song of the robin and the filling of the pothole