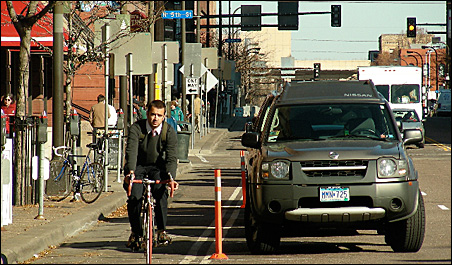 From Andreas Røhl’s perch behind the handlebars, Minneapolis looks like a city at the beginning of a bicycle cycle.

Røhl is chief of bicycle programs in Copenhagen, probably the world’s most advanced bicycling city. About half of all trips within the Danish capital’s boundaries are made on bikes, a share that no American city approaches.

Still, Røhl described his spin through Minneapolis on Thursday as impressive. The United States’s top-rated bicycle city (a 3.8 percent mode share) has a lot of nice trails, nice views and a core of passionate riders, he said. What it lacks at this early point is urban density and a European attitude that treats bicycle travel as perfectly ordinary.

In Copenhagen, for example, to ride a bike to work, to a restaurant or to a friend’s house is as normal as brushing your teeth. It’s so normal that Danes have done almost no formal research about how to fit bikes into the urban setting. They’ve just gone ahead and done it. Curiosity about the city’s huge success comes mainly from abroad, especially from the United States — which explains Røhl’s stopover here.

After a day of advising local bike groups and transportation officials, he paused at a south Minneapolis café for a few questions:

MinnPost: How do you make a good bicycle city? Do you have to be intentional about building a market for cycling, or do you just respond to the demand?

Andreas Røhl: It’s a waste not to be intentional because bicycles are the cheapest way to move a lot of people around in a city. In Copenhagen, the first [bicycle lane] was completed more than a hundred years ago. So it has been a long-running story. It took on more speed in the 1980s and again in this century when more attention was paid to traffic management. We found that it’s effective for citizens choose a bike not just because it’s good for health and so on, but also because it gives cars and buses more room to operate. Every driver or bus rider should stick his head out the window and say ‘thank you’ to the person on the bike.

MP: So Copenhagen would be in gridlock if it weren’t for bikes. 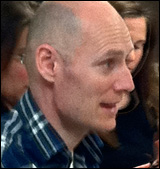 AR: Yeah. If you imagined even half of the bike riders driving cars you’d have a terrible problem. At a corner you might see 70 bikes stopped at a light. Imagine if they were all driving cars. Some people say that we should have a car-free day just to see what would happen. I think it would be more interesting to have a bike-free day. That would be chaos.

MP: How important is it that Europe penalizes driving — or, to put it more accurately, removes subsidies for cars? You pay a far higher and more accurate price for gasoline, and owning a car in Copenhagen carries a big tax.

AR: For sure it plays a role. The price of transport influences your choice. It’s interesting that the average income of people on bicycles in Copenhagen is a bit higher than people in general. We see that as car ownership increased by 50 percent, the average distance of trips went up by 25 percent. When we ask people why they choose bicycles, the overwhelming answer is that it’s the fastest, easiest and most convenient way. Only 12 percent say they choose bikes because they’re cheap. And so travel time, comfort and flexibility play a bigger role than cost.

MP: In the U.S., the biggest reason for depending on bikes is ideological. You believe that bikes are better for health, for the environment, for energy conservation and so on. Nearly all of the top bicycle cities — Portland, Minneapolis, Eugene, Ore., Boulder, Colo. — are known for liberal politics. Don’t’ we have to get beyond that?

AR: Yes. I think bicycles shouldn’t be political. We don’t ask people to be ideological in the morning when they wake up. We just ask them to choose the fastest and most convenient way to get to work and to make it possible for people to choose the bicycle.

MP: How important is climate in this discussion?

AR: It’s easier in nice weather. I ride two miles to work. If it rains, I have to put on rain clothes. It’s quite common to have snow in Denmark. When that happens we have a decrease. But we keep 80 percent of our ridership in winter.

MP: What’s your impression of the bicycle system here [PDF]?

AR: This is my first visit to Minneapolis. I had a very pleasant bike trip here. It’s nice weather today. It’s quite flat. The traffic wasn’t too bad. I was pleasantly surprised by the number of bike lanes you have — a lot of nice paths devoted to cycling and walking. If it’s possible to make sure you can get all the way from A to B in a pleasant and quick way, that’s the important thing. You have to accommodate more cyclists, both the very keen as well as the general public.

MP: How does our lack of density hurt the cycling market? Over the last 50 years, we’ve cleared out enormous space for cars, parking lots and so on. We’ve got so many fewer destinations here on the same land than in a typical European city. When you ride a bike here you’re not riding past many places where you’d really like to go, or need to go.

AR: I agree. The more dense a city is, the greater the competitive advantage a bicycle has. I don’t see Minneapolis with a mode share for bicycles like Copenhagen’s because Minneapolis is built so much for cars. But still I see no reason why your mode share couldn’t triple from what it is today (3.8 percent). But, yes, the layout of a city is very important to making the bike an attractive choice. We’ve worked a lot in Copenhagen to make the city more dense. It’s one of the most important things.

MP: So many Americans continue to think about bicycles as solely for recreation.

AR: The best way to change is to gather evidence from the rest of the world, to see ordinary people on an upright bicycle, wearing ordinary clothes, going to work like it’s normal, like it’s easy. That’s what you should strive for.