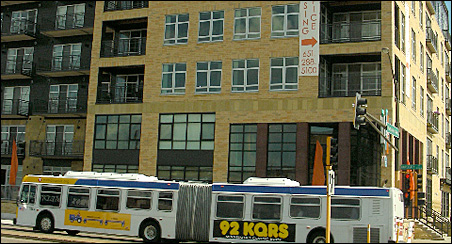 A city can sometimes be its own worst enemy. Take, for example, the zoning controversy that now embroils St. Paul. As early as next week, the City Council, under pressure from low-income neighborhoods and auto-related businesses, may trim back some of the potential for higher-end, higher-density redevelopment along the University Avenue light rail corridor.

In one sense, keeping more of the avenue’s scruffy, low-rise character gives comfort to the frightened immigrant businesses and poor residential districts that anchor much of the avenue, especially east of Lexington Parkway. The prospect of a Starbucks on the corner with pricy apartments above scares the daylights out of neighborhood people who fear the rising rents, property values and property taxes that gentrification sometimes brings.

In the broader sense, however, any decision to discourage maximum investment along the avenue is bad for St. Paul and bad for the wider metropolitan region.

Why? Because, as I’ve pointed out several times in the last few weeks, the most sobering news from the 2010 Census is that the central cities (and many inner suburbs) continue to lose population and comparative wealth while prosperity and growth spreads almost exclusively to the outer ring. If St. Paul and Minneapolis fail to maximize the opportunity that rail transit corridors present for adding population and wealth, then the current stagnation could continue.

Sagging tax bases in both central cities jeopardize the ability to provide basic services like public safety, streets and schools. That, in turn, damages the entire region’s competitive advantage as the national economy recovers. Metropolitan areas with weakening cores simply don’t compete as well on the global stage.

Pulling back on potential
I don’t mean to sound overly dramatic about the pending rezoning decision. St. Paul and its partners have thrown enormous energy into the Central Corridor project. They produced an impressive zoning guide — a temporary overlay — that promoted mixes of use, walkable streets and the higher density that St. Paul so desperately needs. Taller buildings (six stories) were encouraged along the south side of University between Snelling and Lexington with smaller buildings (two to four stories) in most other places.

All of that amounts to a major increase in development potential. Still, the council is considering pulling back on several fronts: the minimum volume for buildings near rail stations would be cut in half; existing auto-oriented businesses could expand without any special permission; and densities east of Lexington Parkway would be further reduced, effectively capping all new buildings at no more than three stories.

Each of those changes reduces redevelopment potential and makes transit-oriented design harder to achieve. Those changes may also violate, at least in spirit, the federal government’s light rail funding agreement, which requires local efforts to maximize trackside development.

Rondo fears gentrification
The rollbacks are especially ironic for Rondo, the historically black neighborhood that has fought hardest against higher-density redevelopment. While the Preserve and Benefit Historic Rondo Committee went to court to force the rail project to add three stations in predominately poor, minority neighborhoods — a good thing — it now balks at accepting density.

“We want development done with us, and for us, and not to us,” committee organizer Veronica Burt told the council last week. “We don’t want these tall structures boxing us in, isolating us.”

Those are eloquent words but they miss the larger point. If Rondo and the other east-end neighborhoods are granted lower densities, redevelopment will be pushed toward the west, where higher densities and lower-per-unit costs will be most attractive to builders. Rondo will be left behind, as it was with the notorious construction of Interstate Hwy. 94 in the 1960s. Moreover, when redevelopment does come to Rondo, low-density zoning will dictate higher costs per unit — the very costs that Rondo wants to avoid.

The east-end neighborhoods seem to be pinning their hopes on affordable housing and other subsidies. These are necessary tools. But, in the bigger picture, the private market drives redevelopment. Government programs aimed at the urban poor have been in retreat for 30 years, and, given the shift in political power to the suburbs, aren’t likely to return. In any case, the bootstrap miracle that Burt and others hope for almost never happens. Poor neighborhoods become wealthier only when wealthier people move in — and bring with them demand for new business and new vitality. Gentrification, for all of its faults, is better than the status quo alternative.

‘The opportunity of a century’
“St. Paul in particular seems to have a problem with density,” said Barb Thoman, director of Transit for Livable Communities. “That’s ironic because the city needs a bigger tax base and more people to share the burden.”

Brian McMahan, director of University UNITED and a long-time advocate of transit-oriented development, said he’s disappointed that City Council may compromise a bit on its zoning. “This is the kind of opportunity you get once in a century. Light rail is a value-added wealth generator for cities and it has the potential to help poorer people more than anyone else. If development is done right, it will take the tax burden off single-family houses and bring more jobs and people.”

Jim Erkel, transportation director for the Minnesota Center for Environmental Advocacy, said he’s disappointed that St. Paul seems prepared “to take some redevelopment potential off the table.” Reducing minimum building sizes near stations would be a mistake, he said, citing the suburban-style CVS pharmacy built recently at the Snelling-University intersection. “If that’s the model [for transit-oriented development] that they have in mind, then they don’t get out much,” he said.

Donna Drummond, St. Paul’s planning director, defended the city’s approach and the down-zoning amendments from council members Melvin Carter and Russ Stark expected to be approved next week. “There’s still a huge amount of potential and capacity for growth along the corridor,” she said. “There’s always a balance to be found between potential tax base and what seems to fit the neighborhood. We want St. Paul to grow along this corridor, and we think our rezoning sets the stage for that.”

Needed: a demonstration project
My view is that both sides are right. Even with the zoning rollbacks, the Central Line gives St. Paul a huge opportunity for growth and wealth generation if the housing market returns and private developers respond.

On the other hand, watered-down densities may not produce the kind of stunning transit-oriented project that this metro region needs in order to truly demonstrate light rail’s potential to transform the urban landscape.

Despite scattered successes, Minneapolis has not yet delivered a transformational station along the Hiawatha Line. There’s nothing in the local market for developers and citizens to look at and admire. Hiawatha’s downtown stations are still surrounded by vacant lots. Large-scale redevelopments at the Lake Street and 46th Street stations were dropped because of neighborhood opposition.

Until someone produces the kind of stunning redevelopment common along rail transit lines in other cities, local officials and neighborhood leaders will remain skeptical. To put it another way: light rail’s ability to move people has been a smashing success in the Twin Cities; but its ability to generate redevelopment has yet to be shown.