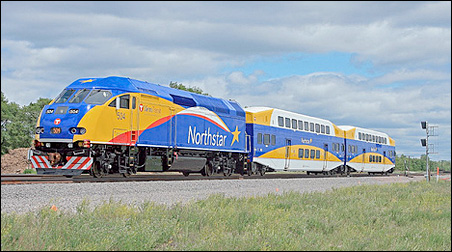 northstartrain.org
Bills pending in the House would prohibit state or local governments from applying or accepting federal money for rail projects.

Budgets aren’t just for cutting, not even in austere times. They’re also for anticipating the kind of world in which you expect to operate in the years ahead.

A wheelchair manufacturer might need to impose layoffs or eliminate its dividend to get through a rough patch, for example. But it knows that to survive the long haul it must prepare for an aging population that will soon demand more wheelchairs.

The same is true for governments and transportation. A big deficit might prompt a slowdown in highway building for a few years. But any state worth its road salt knows two things:

• It must have a transportation system ready to compete for new jobs and new private investment as the economy recovers.

• It must have a system that reflects big changes coming to the transportation, housing and land-development markets.

In other words, it must be careful not to assume that the new post-recession transportation market will be exactly like the old one. It must take into account sweeping global changes that are driving the market in a new direction. Among those changes: political instability in oil-producing regions likely to prompt ever higher gasoline prices; rising atmospheric temperatures probably due to the excess burning of carbon fuels; and a growing understanding that both governments and households must operate more efficiently in order to thrive against China, India and other global competitors.

Pushing the reset button
This emerging market is especially apparent in the big metropolitan areas that drive the U.S. economy: greater demand for compact lifestyles that include smaller homes closer to jobs and shopping, and growing demand for more efficient transportation options, especially transit and walking. In other words, the market has pushed the reset button. The 1950s-era of relying solely on long-distance driving and spacious living is being replaced by an era that offers more lifestyle options. Or, from government’s standpoint, an era in which massive housing and highway subsidies were used to promote solo driving and maximum land consumption is being replaced by an era which it emphasizes balance, choice and efficiency.

Unfortunately, the Minnesota Legislature seems out of step with these trends. You see it most clearly in the House transportation bill that passed last week.

The bill pushed by Rep. Michael Beard, R-Shakopee, eliminates all general fund money for transit ($129 million in the last biennium), suggesting instead raids on three funds: proceeds from local-option sales taxes set aside for new lines, grants used by the Livable Communities program to help local governments retrofit communities to the new real-estate market, and funds set aside for right-of-way acquisition. The overall impact would be to cut transit operating funding by about 20 percent. Moreover, if county sales-tax money were shifted, the Southwest line, scheduled to open in 2017, would lose its place in line for federal funding and be delayed for perhaps a decade.

Slashing transit
Other bills pending in the House (but not a part of the main bill) would suspend construction of the Central Corridor light rail line, eliminate the authority of county rail authorities to levy property taxes, and prohibit state or local governments from applying or accepting federal money for rail projects until all roads and bridges meet certain performance targets.

The Senate, also controlled by Republicans, passed on Monday a less extreme bill that would cut transit operations by $32 million over the next two years. Differences will be reconciled in a conference committee and subject to a possible veto by Democratic Gov. Mark Dayton or left to be negotiated as part of a unified budget deal at the end of the session.

Until then, the House version, especially, will continue to draw bad reviews from a coalition of transit advocates, environmentalists and business leaders.

‘Bad idea every day’
Metropolitan Council Chair Susan Haigh told legislative leaders that at its extreme the House bill could force fares to rise by as much as $4 a ride or reduce regular-route service by as much as 45 percent, prompting layoffs of as many as 550 drivers and related staff. She called the potential impact “devastating” [PDF], not only to bus and train riders but to the metro and state economy. Eighty percent of riders use transit to go to jobs or school, she estimated. Forcing 22 million transit commuters into cars would cause further congestion on metro roadways and harm business and competitiveness.

“This is all dressed up as a way to help solve the budget problem, but what they’re really trying to do is to destroy the capacity of this region to move forward on transit,” said Hennepin County Commissioner Peter McLaughlin, chair of the Counties Transit Improvement Board (CTIB). “It’s like a new bad idea every day.”

Todd Klingel, president of the Minneapolis Regional Chamber of Commerce, said that some Republican legislators fail to understand that transit is important to business. “Just as we emphasize jobs and work force it makes no sense to take away transit service from people who use it for work and school and put them into cars. There’s a greater need for education on this issue; how does cutting transit help with congesting or help with efficiently moving employees and goods through the region? Cutting transit means that costs for businesses go up. Transit is the circulatory system for our region, and we need it to attract talented young people to move here and stay here.”

Beard makes an impact
The House bill represents Beard’s first foray into the top levels of state transportation policy, and he has made a big impact. During the Pawlenty years, Republicans came to reluctantly embrace transit — even rail transit — as a legitimate part of the transportation system. Pawlenty presided over the opening of the Hiawatha and Northstar lines, and his Met Council chairman, Peter Bell, worked tirelessly to keep the Central line on track. Upon leaving office, Bell said that transit was no longer an issue that deeply divided the parties. But he may have been wrong.

Beard has brought ideology back into the conversation. From his viewpoint, government should play an extremely limited role in people’s lives.

“Government is divinely ordained to provide order and security and maximize personal freedoms,” he told the Shakopee Valley News in 2006. “… Government should only do for people things they shouldn’t do for themselves or can’t do reasonably.”

One of the reasonable things people can do is to drive cars, he argued while explaining his bill on March 28. (See video.) Government steps in with transit to get “people to work, to school, to the dentist, wherever they need to go if they can’t afford to have their own car or if for reasons beyond their control they can’t have a car and drive themselves.”

In denial?
It’s a revival of the argument that transit ought to be seen as a social service rather than a choice that allows people the option of more efficient and sustainable lifestyles. I thought that the latter side had won the day, but apparently I was wrong. Beard’s view, now prominent again in the Legislature, warrants a fuller discussion.

Change never comes easily. The post-1945 era of automobile primacy, cheap gasoline and spacious living will find it hard to share the stage with a parallel system that emphasizes transit, walking and compact communities. It’s easy to drift into denial that the world has changed, that the new transportation market will be different from the old one, that more efficient ways of arranging ourselves and moving between our destinations must be found, that our prosperity depends on our ability to compete and change our old ways.

In seeking to cut transit, Legislature is out of step with new trends