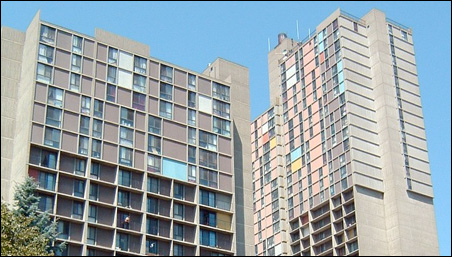 The idea that design can dictate the ideal life is hardly new. Plato’s “Republic,” Augustine’s “City of God” and Thomas More’s “Utopia” each imagines an architecture with perfectionist powers.

One of America’s best remaining examples rises above the intersection of two major freeways near downtown Minneapolis. Depending on your perspective, Riverside Plaza is either a towering eyesore or a valuable lesson on how a utopian vision can fail miserably yet succeed in an unexpected way.

Ralph Rapson‘s clump of skinny concrete towers with faded colored panels never fulfilled its “new town in town” promise, never transformed the Cedar-Riverside neighborhood into a lattice of Euro-style flats in which people of all ages and incomes would live happily together on the doorstep of a great university.

Only 1,303 of the projected 12,500 units were ever built. After an acclaimed opening in 1973, the complex deteriorated gradually into what has been called “a slum in the sky.” Rapson’s exposed concrete didn’t wear well. The grounds weren’t cared for. The mechanical systems fell into disrepair. The neighborhood declined. The towers themselves have been fully occupied for four decades, but not with the diverse population that Rapson had hoped for. Nearly all residents have been poor, and nearly all have been immigrants from Asia, then Africa, making their first stop in a strange new world.

Now, Riverside Plaza has come nearly full circle. Developer George Sherman last week officially launched a $132 million refinance and renovation. Construction is expected to take two years and to include a repainting of the panels to the original primary colors, a redo of the grounds, an expansion of the on-site charter school, a remodel of each apartment and a massive overhaul of the mechanical systems — most critically the plumbing, heating and elevators.

Restoring Rapson’s original design
Riverside Plaza’s 2010 listing on the National Register of Historic Places provides Sherman valuable tax credits to help in his project. It also provides assurance that the renovation will match Rapson’s original modernist design, down to the smallest detail.

Local government, for its part, will improve the streetscape along Cedar and Riverside avenues and install new lighting, signs and pedestrian/bicycle links between the existing Hiawatha Line LRT station and a new Central Line LRT station being built at the Cedar/Washington intersection two blocks away. If nothing else, Riverside Plaza is well located.

Minneapolis sees the renovation as a springboard to a lively new transit-oriented district centered on the Central Line station. It has identified a dozen pads for potential mixed-use buildings. It intends to make the district a showcase for how a transit station can generate new housing and business activity close by. One might say that Rapson’s big idea is getting a second chance to deliver.

A tour of the site
Sherman and Mike Christenson, the city’s director of planning and economic development, offered a brief tour of the monumental renovation last Wednesday. I went along. 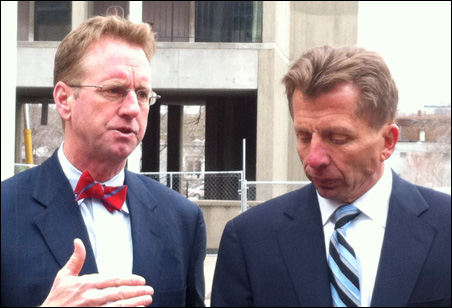 I was first struck by how much worse Riverside Plaza looks from close up than it does from far away. After four decades the raw concrete that so dominated Rapson’s brutalist style makes a building look truly brutal. It had been more than 30 years since I had stood on the once-lovely elevated plaza. The view of the city skyline was still impressive. But the immediate surroundings had turned drab and depressing. I wondered whether $132 million could really do the job.

We rode an elevator to an upper floor, where drywall and plumbing work was already under way. Sherman explained that the current plumbing system takes a half hour to deliver hot water to some units, and that the waiting time for elevators can be just as long. The modest apartments will be renovated at the rate of 65 each week. Tenants will move into special “hotel units” while their own homes are remodeled.

“For us, it’s kind of like doing open heart surgery while the patient is awake,” Sherman explained. The arduous process should be completed by late 2012.

Architecture finds a new meaning
Perhaps the most impressive aspects of my visit were the residents themselves. They are nearly all Somali immigrants who have fled from a chaotic homeland to the kind of welcoming order that Riverside Plaza seems to offer.

“They have big aspirations for their children and they really value education,” Sherman said, ticking off examples of kids who have grown up to be doctors and lawyers. Parents drive taxis and work in parking lots so the next generation can have a better chance, he said, adding: “By in large, this a very industrious, very impressive group.”

“This is the American story,” said Christenson, who lived in the complex in the early 1980s while attending law school. “We aren’t Arizona. We love immigrants. We want immigrants in this city. It’s who we are.” 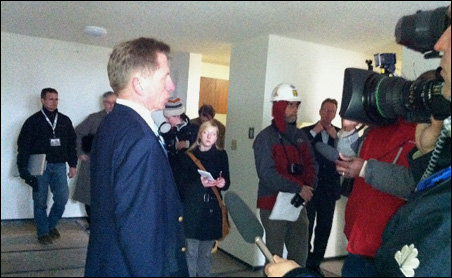 He told a story about a community meeting during which Sherman and others went into great detail about the upcoming repairs and about the temporary inconveniences that construction would impose. These were things that might annoy a typical Minnesota audience, but the immigrant crowd was calm and unconcerned. Finally, one of the Somali elders seated near the front rose to speak a simple sentence: “We care about our young people,” he said. Then he sat down.

For Christenson, the message was palpable. In a single sentence Ralph Rapson’s idealistic dream about Riverside Plaza had been fulfilled in a different and unexpected way. Who is to say that this clump of unlovely high-rises on the edge of downtown never lived up to its noblest potential?