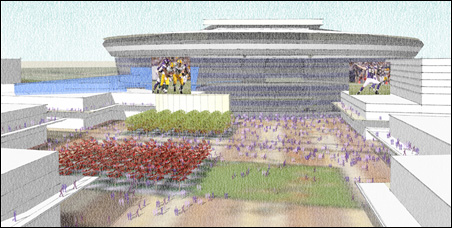 Populous
A proposed design for a new Vikings stadium in Arden Hills.

Minnesota is drawing national acclaim for its ability to carefully guide and prioritize its transportation investments and then measure the results. A study www.pewcenteronthestates.org/transportation released this week ranks our state at the top (along with Maryland, Missouri, Oregon and Virginia) for tracking the performance of its transportation system.

The Pew Center on the States and the Rockefeller Foundation conclude that in a time of scarce resources only a handful of states have the ability to hold themselves accountable for spending wisely on roads, bridges, buses and so on.

• U.S. Rep. Michele Bachmann’s insistence that a big freeway-style bridge be erected over the St. Croix River south of Stillwater. Gov. Mark Dayton and Sen. Amy Klobuchar chimed in to support the $700 million project even though it defies the National Wild and Scenic Rivers Act and even though MnDOT was expecting to move forward with a smaller bridge that would have been compatible with its scenic surroundings. As it stands, the big new bridge will invite even more growth on the Wisconsin side of the river and exacerbate the costly and inefficient spreading out (and thinning out) of the metro area.

Courtesy of MnDOT
This plan for the Stillwater bridge is larger in scale and has greater environmental impact than an alternative proposal.

• The apparent selection of Arden Hills as the site for a new Vikings stadium (and ancillary development). It’s clear why the team wants the site: it can make more money there. It’s clear why fans want the site: they can get drunk in a massive parking lot before the game. But from a public policy standpoint it’s a terrible decision. State taxpayers would have to fork over $175 million to $240 million to improve roads just to accommodate the Vikings for 10 games a year. A far better choice from the public’s standpoint would have been the Metrodome site, where more than $2 billion worth of freeways, bridges and rail lines have already been provided.

In other words, MnDOT deserves the credit it is getting for designing an accountability system that measures its performance on safety, commerce, access, mobility, environmental stewardship and maintenance. Commissioner Tom Sorel deserves thanks for restoring professionalism and pride to the agency. But politicians and special interests can easily override MnDOT’s best intentions. Just because performance can be measured doesn’t mean that the performance itself will be top-notch.

Cheers and jeers
• Cheers (sort of) to Minneapolis for ramping up its street repairs this summer. Repairs are badly needed. But the city’s press release made it sound as if the $19 million effort was extraordinary when, as a staffer later conceded, it was the amount the city had planned to spend anyway.

• Cheers (but with a big question mark) to MnDOT for launching a research project on mileage-based fees. It’s all the rage in transportation circles to argue that because of hybrids and better-mileage cars, the gasoline tax will soon no longer produce enough revenue to build and repair roads. I’m not convinced that mileage-based fees are an improvement.Yes, they are an incentive to drive fewer miles and to shift travel habits to more efficient modes. But raising the gas tax would do the same thing, plus it would reward drivers for fuel efficiency and environmental sustainability. I know drivers hate to pay higher gas taxes. But they’ll hate mileage fees just as much. Maybe someone can explain to me why mileage fees are better?

• Jeers to U.S. Reps. Colin Peterson and Tim Walz for swallowing the “drill baby drill” rhetoric of the oil companies. Despite record profits, big oil wants more environmental concessions on drilling for oil offshore. We are like the fat man who, instead of going on a diet and heading to the gym, wants easier access to junk food. We won’t solve our energy problems (and related foreign policy problems) until we begin to treat oil dependency as an addiction.

In metrospect: Stories you may have missed
• The missing men: NYT columnist David Brooks wonders why 20 percent of American men in their prime working years aren’t working. Too many men lack the emotional and professional skills needed in today’s market, he writes. And the economy isn’t offering the low-skill, high-pay jobs once offered. What’s needed is more emphasis on community colleges, apprenticeships and wage supplements, he says, adding: “If this were a smart country we’d be having a debate about how to shift money from programs that provide comfort and toward programs that spark reinvigoration.”

As one of the missing 20 percent (the internet took away 80 percent of my dollar value as a journalist), I’d like to add technology to the list factors in the unemployment and underemployment trends. The changing nature of work has left many people, whether men or women, skilled or unskilled, on the uncomfortable ledge between job and no-job.

• The trouble with rating a city’s livability: Is it also lovable? Is it achievable? This piece in the Financial Times questions the ever-popular livability lists. Every rating service seems to love Vancouver, for example. Certainly it’s beautiful. But isn’t it also boring and unaffordable? Beautiful cities are overrated, the story suggests. “They cannot accommodate the kind of change and churn that keep cities alive. In London, New York and Berlin, it is their very ugliness which keeps them flexible.”

• Jane Jacobs: Misunderstood 50 years later? Toronto Globe and Mail columnist Stephen Wickens recalls the great urbanist thinker five years after her death and a half-century after the publication of “The Death and Life of Great American Cities.” Among those he interviews is Harvard economist Edward Glaeser. Her central idea, Glaeser recounts, is that cities are not buildings or infrastructure but “what real people make of them.”