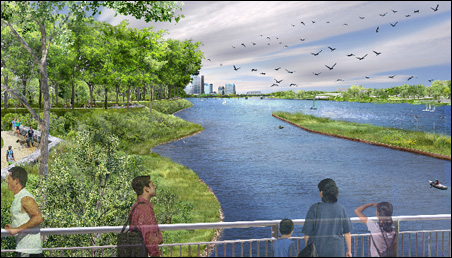 Nature may have left north Minneapolis a shredded mess, but Sunday’s violent tornado seemed only to strengthen local resolve to restore nature along the nearby Upper Riverfront.

Perhaps no single action this week demonstrated as much faith in the North Side’s long-term future as the series of design sessions aimed a choosing where exactly to begin the monumental 5.5-mile initiative. Three specific projects emerged as likely targets to complete within the next five years:

• A loop of walking and biking trails running upriver from the Plymouth Avenue Bridge. The loop would run up the west bank past Broadway to a railway bridge at 24th Avenue, then across the river and back down to the Plymouth bridge, where a new park and beach would be established on the site of the former Scherer Brothers lumber yard. The loop would effectively extend the current downtown river loop northward and introduce to the public a part of the Mississippi River that’s seldom explored. “The most important starting point is to bring people to the river’s edge,” said Tom Leader of Berkeley, Calif., head of the project’s design team.

• New wetlands at the south end of the Upper River Terminal made possible by consolidating the port’s activities closer to the Dowling Avenue interchange. Marshes would stretch northward from the Lowry Avenue Bridge to 36th Street, restoring the grassy wetlands that once bordered that part of the river and providing an opportunity to install a walking/biking trail segment. The City Council holds short-term leases on the property, now used for product storage and barge loading. A vote as early as this fall could begin the process of converting the port to a green manufacturing and shipping terminal as envisioned in the long-term plan.

• A narrow finger of green space and water that would, in effect, extend the riverfront into the heart of downtown. Called the Gateway, or Library Park, the project would start at the foot of the Hennepin Avenue Bridge near the Post Office and run six blocks to the light-rail station on Nicollet Mall. A focal point would be a major gathering space at the Washington-Nicollet-Hennepin intersection, just north of the Library.

Extending a park over a freeway
Another important emphasis — and one that is linked most closely to the tornado’s damage — is to investigate the feasibility of a land bridge that would extend Farview Park over Interstate Hwy. 94 and down to the river. The idea is to eventually create a green expanse of ball fields, markets, urban farming and other features that would run seven blocks from Lyndale Avenue to a point on the riverbank between 26th and 28th avenues. The land bridge would be similar in some ways to one that spans I-35 in Duluth. 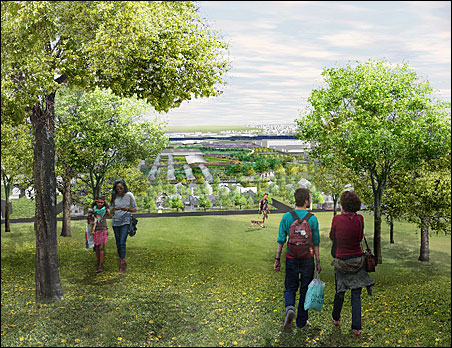 TLS/KVA
Looking across a land bridge toward the river from Farview Park.

Over the next two months, the Berkeley and Boston-based design team (Tom Leader Studio and Kennedy & Violich Archicture) will work with the Minneapolis Riverfront Development Initiative and other local partners to investigate feasibility and possible funding for these initial ideas. The team will also seek feedback from community groups, private citizens and nearby businesses. By September, the initiative and its partners intend to recommend to the Park Board and City Council just where the massive undertaking should begin. The entire 5.5-mile project is expected to take decades to build.

Selecting one or more segments to complete over the next five years is considered vital to the larger project’s momentum. “People have to see a sample of what can be done,” said Sheila Kennedy, a principal architect for the project. The overall vision is to unite various “systems” (health, mobility and green economy) in a way that reintroduces residents of north and northeast Minneapolis to the river.

Living with industry
For more than a century industry has dominated the waterfront. Many residents are scarcely aware of the river’s existence. But with dwindling barge traffic and an overall decline of heavy industry, the city has sought several times to ignite redevelopment efforts. Finally, last year the Park Board sponsored an international competition that stirred local interest and drew entries from some of the world’s top design firms.

No final cost estimate has been attempted, given the project’s 40-year timeline. But $152 million in public and private money has already been committed to pieces of the project, including repairs to the Plymouth and Lowry bridges and a new headquarters for the Mississippi Watershed Management Organization near the east end of the Lowry bridge.

Many obstacles remain even before the initial projects can be selected. Will the railroads agree to “clip on” bridges that would allow bikes and pedestrians to pass alongside or beneath rail bridges? Will MnDOT consider a land bridge over I-94? Will private industries, especially those just south of the Lowry Bridge on the west bank, allow easements for bikers and pedestrians? Will the dozens of governments, citizen committees, task forces and private businesses cooperate in the effort? 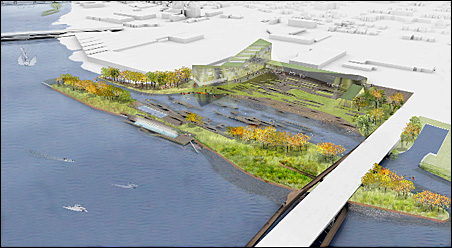 TLS/KVA
Concept for Scherer Park on the east bank below the Plymouth Bridge.

An eclectic mix
That might be difficult. What the city has in mind, after all, is truly groundbreaking. Rather than stripping the riverbank of industry and installing traditional parks, developers plan to intermingle natural areas, recreation, trails, wildlife habitat, industry, shops, restaurants, urban farming, housing and offices — all with an accent on green lifestyles and environmental integrity. The drama may come in the way of, let’s say, grassy wetlands and walking trails next to a crusty old factory next to a live/work loft building with a coffee shop below. While the riverbank itself will be reserved for nature (it’s a national park, after all), it’s hoped that the nearby blocks will retain their eclectic mix of uses, but in a more concentrated and artful way.

Historically, investments in green space have paid off for Minneapolis. Most of the city’s pricy real estate adjoins the lakes and parkways. The hope here is that new business and residents will be attracted, but also that many of the city’s poorest neighborhoods will benefit from new amenities. It’s hoped that eventually the entire 5.5-mile stretch from St. Anthony Falls to North Mississippi Park on the city’s northern edge will be connected by trails along each side of the river.

Images of the plan and design presentations may be downloaded here.