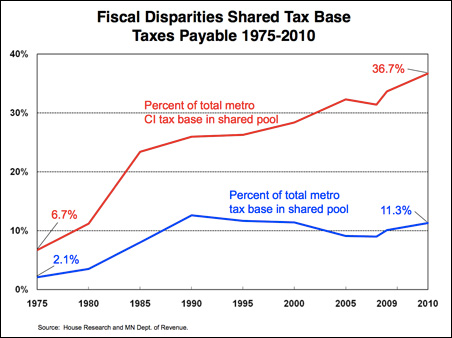 In the 40 years since the Fiscal Disparities Act was passed by the Minnesota Legislature, the Twin Cities’ unique tax-base sharing law has survived multiple court challenges and repeal efforts. Evidently some people don’t like to share!

The law is undergoing scrutiny once again, as a result of a legislative directive approved at the request of the curiously named Municipal Legislative Commission, a coalition of 16 of the region’s more affluent suburbs.

The Fiscal Disparities Act, which took effect in 1975 after being upheld by the courts, requires all communities in seven-county area to share 40 percent of the annual growth in their commercial-industrial tax base. The tax base is redistributed to communities under a formula based on their fiscal capacity to provide urban services.

The idea was to reduce the disparities between the “haves” and the “have-nots” — communities with a lot of commercial-industrial property and those lacking in such development.

The legislation grew out of a study completed in 1969 by the Citizens League, a nonpartisan public policy research organization. The idea was quickly embraced by Rep. Charles Weaver Sr., R-Anoka, and enacted into law in 1971. 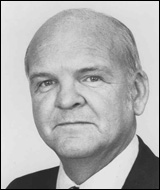 Son Charlie, who succeeded his late father in the Legislature and now heads the Minnesota Business Partnership, recalls his father as a passionate advocate for the concept, traveling “all over the country talking about it. Lots and lots of places wanted to do something similar.”

“The essence of Fiscal Disparities was that as a region, we’re all in this together and that regional decisions about where highways go, where airports go, where shopping centers go — they all influence where growth [and therefore tax base] goes,” he says.

Another precipitating factor was the decision of officials in Washington County to allow the construction of a new power plant near the St. Croix River, which was on its way to being designated under federal law as a “wild and scenic river.” Again, the desire for tax base appeared to influence local decision-making.

Proponents of the fiscal disparities law argued that it was about more than just sharing the wealth among the “haves” and “have-nots.” They said it also was intended to:
•    Reduce the competition among metro communities for economic development, just for the sake of development.
•    Protect the environment by discouraging development on unsuitable land for tax reasons.
•    Provide a mechanism for sharing the benefits of major regional facilities — such as power plants and shopping malls — that have a regional customer base.
•    Reduce the fiscal impact of regional decisions such as where highways and transit lines are located.
•    Reduce the obstacles to siting regional parks and other tax-exempt facilities.

However, Paul Gilje, former research director for the Citizens League, recalls one of the most effective sales pitches was this: “No matter where a business locates in the metropolitan area, and no matter where you live, you will get some of the benefit.”

Impact of the law
Over the years, the Citizens League, the Metropolitan Council and other groups have tracked the impact of the law. The most recent studies indicate that among all communities in the program, the net gainers outnumber the net losers by more than 2 to 1 (120 to 60) for taxes payable 2011.

These studies indicate that the disparities in commercial-industrial tax base per capita among communities with population over 10,000 are now 3 to 1. In the absence of the law, the disparities would be 10 to 1.

Currently, the regional tax-base pool represents about 39 percent of the region’s total C/I tax base and 12 percent of its entire tax base (residential included).

The city of St. Paul historically has been the largest single beneficiary. In 2011, the next largest gainers were Brooklyn Park, Brooklyn Center, Coon Rapids and Andover. Minneapolis switched to being a net loser in 2011 after being a net gainer from 2002 through 2010.

In 2010, the aforementioned Municipal Legislative Commission convinced the Legislature to order a new study of the Fiscal Disparities Act and its impact. Not coincidently, 10 members of the group are among the 20 largest net losers under the law. They include Bloomington, Burnsville, Eden Prairie, Edina, Maple Grove, Minnetonka, Plymouth and Woodbury.

Call for study
Among the questions the group raised: Do contributions to the pool prevent local communities from generating enough revenues from large developments such as the Mall of America to cover the cost of providing services to those developments?

“A lot has happened in the last 40 years,” says Bill Schreiber, lobbyist for the group. He says the law should be examined in the context of current school aid, local government aid and other laws that also attempt to address fiscal disparities.

Sen. Ann Rest, DFL-New Hope, the chief Senate sponsor of the legislation calling for the study, says she wants “to see if it is still producing the desired effects” or whether it needs to be modified.

Some years ago, Rest says, she introduced a bill that would have reduced the contribution of every community from 40 percent of its annual C/I growth to 20 percent. One of her questions, she says, was whether the law was “capturing the inflationary growth rather than the real growth.”

To analyze the Fiscal Disparities Act, the Minnesota Revenue Department has contracted with TischlerBise, a fiscal, economic and planning consulting firm based in Bethesda, Md.

Eric Willette, property tax research director for the Revenue Department, says one of the firm’s specialties is analyzing the cost of growth to local governments. Among other things, the firm will attempt to determine whether communities are giving up more tax revenue from C/I development than it costs to service that development. The legislative deadline for completion of the study is Feb. 1.

Myron Orfield, a University of Minnesota law professor, a former state senator and author of three books on metropolitan growth, is a strong supporter of the Fiscal Disparities law. 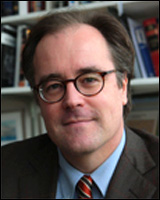 In a 2007 law review article, Orfield and Nicholas Wallace argued: “The Twin Cities metropolitan region has benefited from tax-base sharing by reducing incentives for fiscal zoning and tax-base competition and associated negative outcomes. The program ensures that all residents enjoy a minimum standard of service for important local services like public safety.

“By reducing the need for local governments to ‘steal’ revenue-generating land uses from each other, such policies allow them to engage in more thoughtful and beneficial land-use planning.”

As for the more affluent communities who are net losers under the law, Orfield says, “They are still retaining 60 percent of pretty massive growth.”