Continuing a trend that began in the first half of the last decade, the rate at which land is being consumed in the Twin Cities metro area has slowed considerably since the 1990s.

There also are indications that housing densities are rising as more of us baby boomers move into our senior years and no longer want to mow lawns or shovel snow.

These are among the findings of the Metropolitan Council’s 2010 land use inventory, which was completed in August. The inventory, conducted every five years, is based on an analysis of data from aerial photography, county parcel data and assessors’ information.

The results are good news for critics who complain — fairly or otherwise — that the Met Council hasn’t been aggressive enough in restricting growth on the suburban fringe and promoting higher density, transit-friendly development in the urban core.

Among the key findings of the study:

All told, the largest single category of land in the seven-county metro area is still agricultural — 30 percent. Another 23 percent is undeveloped and 6 percent is open water. Residential use accounts for 22 percent of the land, with 5 percent as commercial-industrial, 2 percent as institutional and 2 percent as major roadways. 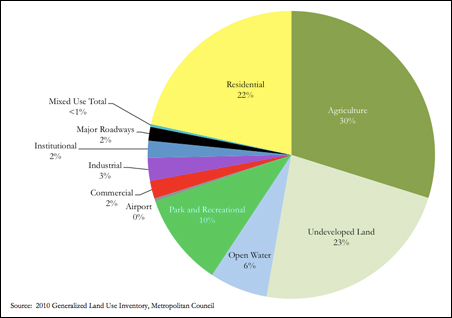 The rate at which land is being consumed in the metro area has slowed, while housing density has risen.

Key factors
Admittedly, the major factors in the slowdown of land consumption are the recession, the slow-down in the region’s population growth and record-low levels of residential construction. 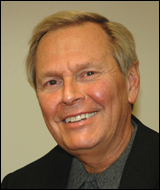 However, the reduced rate of land consumption also appears to have been influenced by changing demographic needs and preferences.

“There is no question that cities are planning for more medium- and higher-density development,” says Guy Peterson, the Met Council’s director of community development. “Younger people are often looking for a more compact, urban setting and at the other end of the spectrum empty nesters often look to move out of their single-family home.

“Land costs are a big factor as well,” he says. “Less dense development on more land is typically accompanied by higher costs. As a result, we’re seeing and experiencing more infill development.”

These trends are reflected in building permit data. In the 2000s, only 44 percent of the residential housing units permitted were single-family detached homes, compared with 67 percent in the 1990s.

Such trends are likely to continue. The Regional Council of Mayors has a new program that is helping members “navigate the new normal” in growth patterns, demographic trends, housing choices and commuting.

“This is a major emphasis of the work we are doing — helping cities to be more sustainable and use land more efficiently,” says Caren Dewar, executive director of the group.