It is encouraging that Gov. Mark Dayton has enlisted the Metropolitan Council to help evaluate the site of the former Twin Cities Army Ammunition Plant (TCAAP) as a location for the proposed Vikings football stadium. 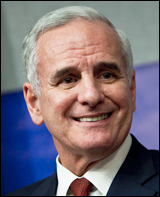 Too often in the past, the Met Council has been excluded from decisions involving the siting of major facilities in the region — the Metrodome, Target Field, the World Trade Center, the race track, amateur sports facilities, among others.

Unfortunately, the governor’s charge [PDF] to the council and the Metropolitan Sports Facilities Commission is a bit narrow — to “ascertain the potential risks, if any, of the proposal and suggest ways to mitigate or eliminate any exposure to the public.”

What the council won’t be doing, according to a council spokesperson, is drawing any conclusions about (a) whether the 430-acre Arden Hills site is the best location for the proposed stadium compared with other possible locations or (b) whether a stadium is the best use of the TCAAP site.

Nor will it be making any kind of cost-benefit analysis about whether the true economic benefits of the stadium equal or exceed the public costs.

Indeed, the 17-member council board may not be saying anything at all. Regional Administrator Patrick Born says the agency may simply forward the results of the staff work requested by Dayton.

Council planners are working with a project team that also includes staff of the sports facilities commission, the Minnesota Department of Transportation and Minnesota Management and Budget.

In addition, the council has a contract for up to $90,000 with Kimley-Horn and Associates Inc., a national engineering and land planning firm based in Cary, N.C. The council hopes to complete its review by Oct. 15.

Plans for the proposed 65,000-seat “people’s stadium” [PDF] were unveiled in May by the Vikings and the Ramsey County, the only local government eager to play ball with the team and help fund a new facility.

In announcing the proposal, Vikings owner Zygi Wilf said, “We believe the Ramsey County site offers the most benefit to our fans, the team and the state and is an ideal site for a new stadium.” 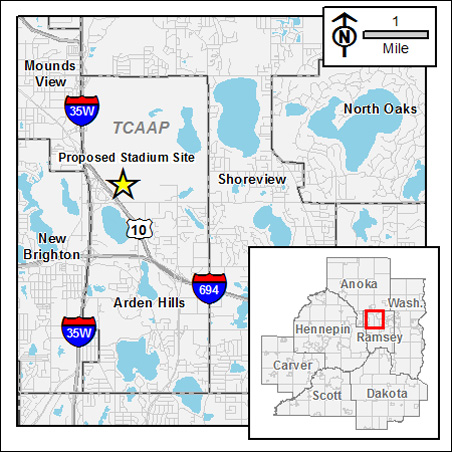 Courtesy of the Metropolitan Council
The proposed stadium site is off Co. Hwy. 10, north of Hwy. 694 and east of I-35W.

The stadium would have a retractable roof and cost nearly $1.1 billion, with $407 million coming from the Vikings, $300 million from the state and $350 from Ramsey County through a new half-cent sales tax. The site includes 170 acres of land that would be available to the Wilfs for related development.

The 2,400-acre TCAAP site is one of the largest redevelopment opportunities in the metro area and has been the subject of numerous proposals since the 1990s. However, it is the largest Superfund site in the state, presenting major contamination issues.

Ramsey County officials say the 430 acres targeted for the proposed stadium have been cleaned to “industrial standards,” but their agreement with the Vikings includes $30 million for site acquisition and further cleanup.  That number will get a closer look in the Met Council review now under way.

Another challenge for the site is that adjacent highways and interchanges would require a major upgrade, with cost estimates ranging as high as $175 million. Lester Bagley, the Vikings vice president for public affairs, says more recent estimates put the number closer to $100 million.

Unfortunately, the site is far removed from existing and proposed transit lines, meaning that transportation options for games would be limited to cars and buses.

That undoubtedly is a plus from the Vikings’ perspective. Their plan includes 21,000 parking spaces, a major source of new revenue for the team. But it would fail to capitalize on the $2 billion investment the Twin Cities has made in improved transit, just as region’s third rail transit line in the Central Corridor is about to be completed.

Beyond the questions about the site, there are broader issues relating to whether the taxpayers of Ramsey County and the state of Minnesota should contribute $650 million or more to a project benefiting one private business.

Arthur Rolnick, longtime director of research for the Federal Reserve Bank of Minneapolis and now a senior fellow at the University of Minnesota’s Humphrey Institute, says no. 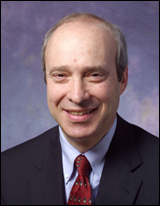 Rolnick, who has his doctorate in economics, raises three basic concerns:

Rolnick has been involved in similar debates since the early 1990s, when he says Northwest Airlines “essentially blackmailed the state” to secure a $761 million public assistance package. The deal, which involved promises of new aircraft maintenance facilities in Duluth and Hibbing, began to sour almost before the ink had dried.

Bagley rejects the idea state and county tax dollars would be “going into a private business. It is public money going into a public building. This is an opportunity to leverage more than $400 million in private investment in a publicly owned facility that will be used by everyone,” as the Metrodome has been.

Economic development
From an economic development standpoint, Rolnick says, it makes no sense for Congress to allow companies to play states and cities off against one another to extract public subsidies. “These companies are going to locate somewhere,” he says, “and the public return is zero.

“When you ask what are the economic benefits of doing something like this — do they create jobs? — look around the Metrodome,” Rolnick adds. “There’s a real-world example. Generally, businesses don’t want to locate around stadiums. They are empty most of the time. You get a few sports paraphernalia shops. You get a few bars and restaurants. It’s not a good form of economic development.”

Ramsey County officials claim that the stadium site, “once fully developed,” will generate $6.6 million a year in property taxes and $145 million in direct annual spending by fans, the Vikings, visiting teams and the NFL.”

“If you want to go get dueling economists and waste everyone’s time, you line them up and half will say there is no benefit. The other half will say there is tremendous benefit,” says Bagley. “The facts are that the Metrodome has generated $340 million in tax revenues since it opened. The Vikings pay $20 million in taxes annually. Without the Vikings, that’s $20 million that we do not have in our coffers.”

Opportunity costs
Then there’s the question of whether the requested $650 million in public stadium subsidies could be invested more prudently.

“Is there a better investment than that? There are all kinds of better investments,” Rolnick says. “Just about any company could beat that — create more jobs, better jobs, a more vibrant economy. But that’s not the role of government. The private sector does fine all by itself.”

“With a half-billion dollars, every impoverished child in the Twin Cities could get a scholarship to attend a high-quality early childhood education program,” he says. “Studies have shown that if you give these kids that kind of help, you can pretty much eliminate the achievement gap. And the odds are, the kids will be successful in life.”

Stadium study: Will it address all of the right questions?