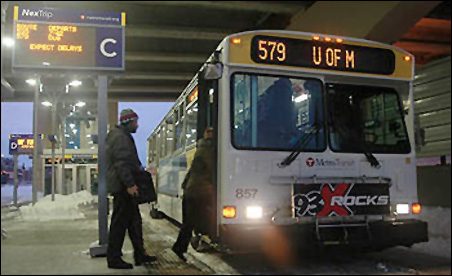 Courtesy of the Metropolitan Council
Riders board buses along the freeway underneath the 46th St. bridge.

“Many of the features of light rail transit (LRT) for a fraction of the cost” — that’s the definition of bus rapid transit (BRT).

Metro Transit, the Twin Cities’ leading transit provider, is now studying the possible development of BRT in 11 densely developed urban corridors that could not accommodate LRT, even if the money were available to cover the enormous cost.

The goal of the study is to identify which of these corridors are most promising for BRT, which would include such features as distinctive vehicles with traffic signal priority, heated bus shelters, off-vehicle fare collection, real-time travel information, more frequent service and faster trips.

“BRT service has been proven in other markets and provides faster travel times and better customer facilities that lead to higher ridership,” says Charles Carlson, manager of transitway projects for Metro Transit, an operating arm of the Metropolitan Council. 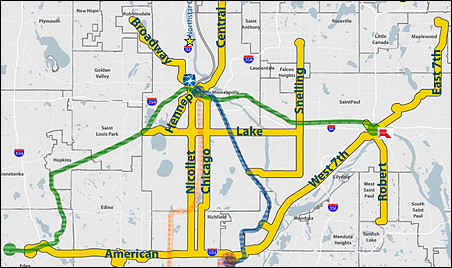 Courtesy of the Metropolitan Council
The corridors marked in yellow are the focus of a rapid bus transit plan for the Twin Cities.

The Met Council’s Transportation Policy Plan has identified what it calls “arterial BRT” as one of the tools needed to double transit ridership by 2030 — to expand transportation options, improve mobility and ease traffic congestion.

The 11 corridors now under study already are among Metro Transit’s most productive routes, collectively generating 90,000 rides per weekday. That’s nearly half of the ridership on system’s urban routes.

Increased ridership
Based on the experience of other regions that have introduced similar transit improvements, Carlson says, BRT has the potential to increase transit ridership by 20 to 30 percent in the first year after implementation.

The National BRT Institute, a research unit at the University of South Florida, lists 19 metro areas in the United States and 11 abroad that have BRT as part of their transit system.

Carlson says Metro Transit has looked at BRT lines operating in a half-dozen cities, among them Kansas City and Seattle.

Kansas City opened the first of its two BRT lines, called the Metro Area Express (MAX) in 2005. It’s a six-mile linear route that serves the city’s River Market area, downtown, Union Station, Crown Center and Plaza. The transit agency there says it has boosted ridership in the corridor by more than 50 percent.

Transit agency officials say the first of these lines, which opened a year ago, boosted ridership in the corridor by more than 30 percent.

Carlson estimates that the capital cost of BRT in the Twin Cities would run about $2 million to $5 million a mile, compared to $20 million to $40 million for streetcars (an option both Minneapolis and St. Paul city officials are exploring) and $60 million to $100 million for LRT.

Key features
Features could include:

• A dedicated fleet of distinctive low-floor buses, with boarding at both doors.

• Increased service frequency, with buses operating every 7.5 to 15 minutes, depending on the corridor.

Metro Transit already has completed a concept plan for the BRT service, with information about the demographics, existing bus service and proposed improvements for each of the 11 corridors. They range from four miles to 14 miles in length.

Carlson says the next step in the study is to estimate capital and operating costs for each corridor, along with the benefits — how many riders each might serve and how much travel time would be saved. The goal is to identify the most promising corridors by early next year, and complete the first BRT line by 2014.

“These are all very successful transit corridors,” Carlson says. “What we’re looking at is building upon that success through further enhancements — particularly to address slow travel speeds that might keep some people from choosing transit.”

The Metropolitan Council is already in the midst of developing more pricy “highway BRT” lines in two corridors — I-35W south of downtown Minneapolis and Cedar Avenue in between Apple Valley and the Mall of America.

These projects include limited access roadways such as managed lanes, bus-only shoulder lanes and ramp meter bypasses in portions of the corridor, as well as park-and-ride lots and several on-line stations that allow for rapid passenger boarding in the middle of the highway.

John Levin, director of service development for Metro Transit, says BRT service could be implemented on I-35W as early as 2016 — following the completion of an on-line station at Lake Street similar to the one opened at 46th Street last December.

The first stage of BRT improvements in the Cedar Avenue corridor are scheduled for completion by the end of next year.