When delegations of business and civic leaders from other metro areas travel to the Twin Cities — which they do every year — they want to visit the Metropolitan Council, widely viewed as a model for regional planning.

They want to know about the Fiscal Disparities Act, the region’s unique tax-base sharing law that narrows the disparities between “have” and “have not” communities.

And they want to learn about the Citizens League, the nonpartisan research organization whose studies helped spawn the Met Council, the fiscal disparities law and many other breakthrough public policy approaches.

“It’s such a great institution for not only making a difference, but also for creating a network of civic-minded people who care about important issues,” says Gary Cunningham, a past president of the League and vice president of programs for the Northwest Area Foundation.

Early next year, the Citizens League will observe the 60th anniversary of its founding. But the group will begin the party a little early — next Wednesday, at the organization’s annual civic celebration at the Nicollet Island Pavilion in Minneapolis. The event is free and open to the public.

I will confess to a little bias when it comes to the League. While still in college, I served on several League study committees. During my years as a newspaper reporter and editorial writer, I regularly turned to it for information. And during my time in government, I served on the League’s Board of Directors.

The organization is a Minnesota treasure.

By the early 1950s, a new generation of civic leaders was beginning to emerge in Minneapolis. In 1952, they launched the Citizens League to provide careful, objective research on local issues.

Over the next decade, the League developed more of a regional and statewide focus, pioneering ideas for the creation of the Met Council, the regional transit and sewer systems, and the Fiscal Disparities Act. 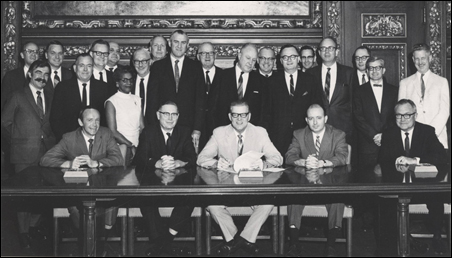 Courtesy of the Citizens League
The appointment of the first Met Council by Gov. Harold LeVander, seated center, in 1967.

In 1970, it produced a report that led to a major overhaul of state-local fiscal policy. That legislation — which came to be known as the “Minnesota Miracle” — dramatically increased state taxes to boost state support for K-12 education, reduce school district dependence on local property taxes and narrow the disparities among districts in per-pupil spending.

The group also helped champion ideas for providing greater school choice — through the relaxation of school boundaries, the creation of charter schools and options for high school students to take classes at post-secondary institutions.

The League’s 500 reports and statements are all archived and searchable on the group’s website, providing a valuable resource for policymakers, academics, students and concerned citizens.

The League has had several near-death experiences, the most recent of which came in the early 2000s. Its membership, once more than 3,200, had dropped to 1,200. Its annual budget had declined from a peak of $600,000 to just over half that. And its professional staff had shrunk from seven or eight to just two.

However, things have really turned around since 2003, when Sean Kershaw was named executive director. Membership has climbed to 2,500, the budget is close to $1 million and the professional staff is back up to seven — plus several consultants who regularly have been tapped for their expertise on important policy issues. 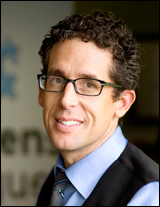 The League also has gotten younger and more diverse. For too many years, it seemed that you had to be white and at least 60 to be a member.

Jean LeVander King, a past president of the League, says Kershaw “has brought incredible energy and imagination to the organization. He has done a phenomenal job of connecting with people of every background and re-imagining its work.”

Kershaw, who previously had been deputy director of St. Paul’s Planning and Economic Development Department, says, “I came in with the advantage of knowing that financially we were a wreck, membership was down, ya-da, ya-da ya, but the important thing is that nobody wanted us to fail.

“The challenge we had was to take all of the intent of the League when it was started and marry it onto the landscape we have today, which is very different in every way from the 1960s,” he says.

Historically, the strength of the League has been its study process — in which it convenes a committee of interested citizens and representatives of key stakeholder groups to gather the facts about a problem, sort through the possible solutions and develop consensus.

It can be a long and difficult process. The 1970 study on state fiscal policy required 33 meetings — most of them two to three hours in length — over a nine-month period.

With the time pressures in life today, getting ordinary citizens to join in such an extended discussion can be difficult. So, in recent years, the League has developed new approaches to engage citizens and make them a part of the policy-making process.

“If you take an issue like school reform and you are not involving students, parents, teachers as well as the general public, you are not going to get a recommendation that is appropriately defined or one that can be readily implemented,” Kershaw says.

Another of the League’s challenges has been getting public attention for its studies and recommendations. The mainstream media don’t seem particularly interested in public policy. That’s unfortunate, because the League continues to do important work.

Boomer report
In December, for example, the League released a 40-page report addressing one of the daunting problems facing the state and nation — long-term health care.

With the “baby boom” generation moving into their retirement years, the report said, we can no longer look to Medicaid as the “default source of financing” for all who need long-term care services.

The report offered “a framework for financing long-term care in Minnesota, based on encouraging and supporting personal responsibility.” It called for:

3. A broad campaign to inform members of the public, many of whom are not aware of the likelihood, costs and inadequate public funding for long-term care.

Lucinda Jesson, the state’s new commissioner of human services, has embraced many of the League’s recommendations.

“By 2030, some 165,000 Minnesotans will be age 85 or older; about half will need long-term care of some type,” Jesson has said. “But because of poor lifetime savings rates and a decline in the number of family members able to provide care, the number of elderly turning to publicly funded long-term care by 2030 could overwhelm any state budget.”

Some years ago, the late Steve Alnes, a distinguished writer and editor who worked for both of the Twin Cities dailies, observed: “The League has been more successful as an instrument of change than any organization in the state.

“If you want a breakthrough — if you want something to happen — you don’t look to the teacher groups, organized labor, the political parties. The League is the best vehicle this state has for generating and examining new ideas.”

Steve’s words ring true today. In our increasingly polarized political environment, the Citizens League is still a place where people with diverse points of view can come together for the common good.

Citizens League: A place to come together for the common good