Every year for more than two decades, Metro Transit and its transportation partners have honored individuals, employers and organizations for their efforts to promote smart commuting alternatives and ease traffic congestion.

In many ways, it’s an uphill struggle. In today’s world, where many people’s commutes include multiple stops to transport children and perform errands, it’s difficult to compete with the flexibility of the automobile.

According to the latest Census data, 78 percent of metro area residents drive alone to and from work, up slightly from 76 percent in 1990. Nine percent commute by carpool and 5 percent by public transit, about the same as in 1990.

Another factor, Howard acknowledges, is that Metro Transit offers fairly limited service once you get outside of the core cities. There, 13 percent of Minneapolis residents and 11 percent of St. Paul residents commute by transit, according to Census figures. 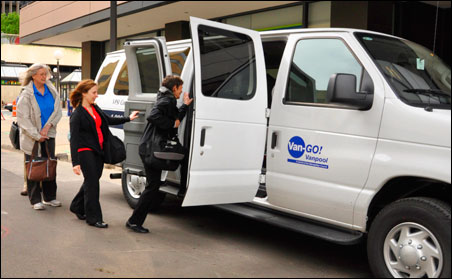 Photo by Jeff Syme
In 2010, more than 3,200 registered van- and carpools were in operation, reducing vehicle miles traveled by an estimated 31 million miles.

“I think it’s mainly a lifestyle issue,” says Bruce Howard, director of customer services and marketing for Metro Transit. “People’s lifestyles are so complicated.”
Efforts to promote such options are reflected in:

•    The 3.6 percent increase in Metro Transit ridership in the first nine months of this year. Ridership is now on pace to top 80 million for just the second time in 30 years.

•    The increased participation in Metro Transit’s Metropass program. More than 250 employers offer these discounted, unlimited-ride transit passes and more than 33,000 employees make use of them.

•    Growth in the use of van- and carpools, formed with the help of Metro Transit’s ridematching service. In 2010, more than 3,200 registered van- and carpools were in operation, reducing vehicle miles traveled by an estimated 31 million miles.

11 honorees
The 11 honorees at Wednesday’s luncheon included Jodie Zurn, who works for the U.S. Department of Agriculture in Minneapolis. She worked to get USDA employees converted from a cumbersome federal transit voucher program to Metro Transit’s Metropass program, saving money for both her agency and its employees.

U.S. Bank was recognized for helping its employees prepare for an office relocation from St. Paul to Richfield. The corporation held two transportation fairs that provided more than 400 employees with resources for their new commute, and offered new incentives for van- and carpooling.

Minneapolis Community and Technical College was honored for providing subsidized transit passes for both staff and students, as well as new facilities to encourage commuting by bike.

For Gerry Westerland, who was involved in the college’s efforts, “One of the biggest joys was watching how attitudes change and lives are changed.”

Commuter options: You don’t have to drive alone