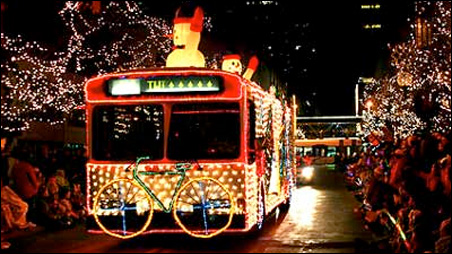 metrocouncil.org
The Metro Transit Twinkle Bus, added to the parade a few years ago, has been retired.

Metro Transit has a Holidazzling deal for you: Plan to attend the Target Holidazzle Parade in downtown Minneapolis on Saturday, Dec. 10, or Saturday, Dec. 17, and travel to and from downtown via transit for free.

The free-ride offer is available on Metro Transit buses and light rail trains from 4 until 8 p.m. on Dec. 10 and 17. In addition, the transit system will provide a special holiday run of the Northstar commuter rail line both Saturdays.

The special-event train will leave Big Lake Station at 3:06 p.m. both days and — after stops at Elk River, Anoka, Coon Rapids and Fridley — will arrive in downtown Minneapolis at 3:55 p.m., giving parade goers extra time to take in other downtown attractions. The parade kicks off on Nicollet Mall at 6:30 p.m.

This year’s Holidazzle season began last Friday and continues every Thursday through Sunday night through Dec. 18. Now in its 20th season, the parade features colorful displays, lights, costumes, music and dancing to celebrate the holidays.

Sadly, one fixture of the Holidazzle Parade will be missing this year. Metro Transit’s “Twinkle Bus,” which was decorated with thousands of holiday lights, has been “retired.”

John Siqveland, public relations manager for Metro Transit, says bus No. 2342 had a full 12-year service run, did State Fair duty for a couple of years and then served for about six or seven years of life as the Twinkle Bus running in Holidazzle, the Winter Carnival Torchlight Parade and other winter events.

“The bus was essentially a labor of love for a few very talented mechanics — a couple of whom have since retired — and required just a little too much TLC in 2010,” Siqveland says.

Instead, Siqveland says, a number of Metro Transit employees will be walking this year’s parade in costume.

If you prefer to remain in the warmth of your car, another option to brighten your holiday season is “Holiday Lights in the Park” in St. Paul.

The event, which features a series of holiday light displays in Phalen Park, can be viewed by car from 5:30 until 10 p.m. nightly through Jan. 1.

Sponsors say this year’s favorite display is sure to be a “larger-than-life enchanted castle with the handsome prince, beautiful princess, wizard and of course, a fire-breathing dragon.”

The charge is $8 to $10 per car, depending on the night you go, with the proceeds divided among four charities — Second Harvest Heartland, Union Gospel Mission, the St. Paul Parks Conservancy and Under Construction, which introduces young people to careers in the construction trades.