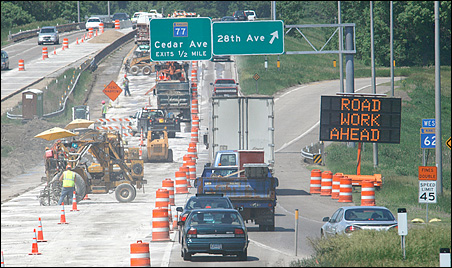 Courtesy of the Minnesota Department of Transportation
Existing revenue streams for transportation funding are proving insufficient.

Just three years after the passage of a major state transportation funding bill, Minnesota transportation advocates are beginning a public education campaign for another increase in funding to address what they see as major unmet needs.

They hope to enlist support from the business community to make the case that increased infrastructure investments are critical to growing the economy of the state and the Twin Cities metro area, and keeping us competitive with other regions around the nation and world.

No one offered any specific funding proposals, but there appeared to be general agreement that existing revenue streams are insufficient.

Indeed, the gasoline tax — a major source of highway and bridge funding — is likely to be eroded in the coming years as more Minnesotans purchase fuel-efficient and electricity-powered vehicles.

Margaret Donahoe, executive director of the Minnesota Transportation Alliance, said her group estimates the state’s unmet needs at $30 billion over the next 20 years — or $1.5 billion a year.

She said the needs — detailed in the group’s report “Roadmap to the Future” [PDF] —  are based largely on the adopted long-range plans of various agencies for roads and bridges, transit, freight and passenger rail, and ports and waterways.

Growth & Justice report
In another recent report, [PDF] Growth & Justice, the left-leaning advocacy group, also made the case for increased investment in transportation infrastructure to improve the state’s economic well-being and quality of life.

But to minimize costs, the group argued, “Minnesota’s public sector must pursue smart and innovative strategies to increase the efficiency of existing roadways, boost transit use, spur more travel on bike and foot, change land-use patterns, and otherwise lower the demand for limited space on crowded highways.”

In their latest transportation plans, both MnDOT and the Metropolitan Council appear to be heading in exactly these directions.

She said businesses that consider locating here want to know the state has a strong, interconnected transportation system that can move people and goods. Transportation construction supports some 60,000 jobs in Minnesota and transportation investments yield $1.60 in economic growth for every $1 invested, she added.

Charlie Zelle, president of Jefferson Lines, said when business site locators visit the Twin Cities, they always look at the transportation system and “want to know where future transportation assets are going to be.”

“Google Transit is the way every young person understands you determine how to get from here to there,” said Zelle. “It’s not just about where you drive your car.”

Vince Montgomery, president of TKDA, a St. Paul-based architectural and engineering firm, echoed that view. Montgomery said his firm relocated its Chicago office to accommodate the transit needs of its employees there and that transit also is important to employees in the firm’s St. Paul office.

In 2008, transportation advocates achieved the first major increase in state transportation funding in 20 years. It included an 8.5-cent a gallon increase in the gasoline tax, an adjustment to auto license fees and authority for the seven metro counties to levy a quarter-center sales tax for transit (which five counties approved).

After the meeting, Minnesota Chamber of Commerce lobbyist Tom Hesse said it would be very difficult to get the current Republican-controlled Legislature to approve another transportation funding bill that included tax increases. The chamber was instrumental in helping to secure legislative override of then-Gov. Tim Pawlenty’s veto of the 2008 bill.

“Our members are focused on making sure the additional funds approved in 2008 are used as effectively as possible,” he said.

Donahoe responded that she is realistic enough to recognize that passage of another major transportation funding package will take time.

“I would say it will require more of a longer-term process to build a consensus,” she said. “We know these things take time. But we’d rather not wait another 20 years.”