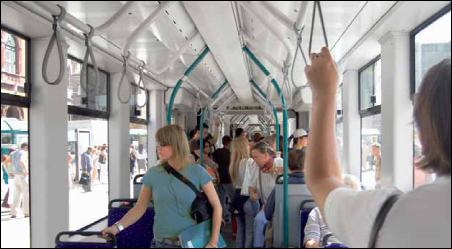 Siemens
Cities could reduce their greenhouse gas emissions by 50 percent or more by linking streetcars and higher-density land use.

Patrick Condon wants to turn back the clock to the streetcar era.

Condon, an urban planner and professor at the University of British Columbia, says bringing back the streetcar is the best thing cities can do to reduce their emission of greenhouse gases and become more sustainable.

Speaking last week at the University of Minnesota, Condon said most North American cities developed out of the agricultural grid system, in which the land was divided into one-mile-square parcels. Streetcars could easily be added back into cities that developed on a grid pattern and many suburbs could be retrofitted to include them, he said.

Congdon said he came to be a “train nut” late in life, and does not readily identify the older guys “in bib overalls hovering over their train layouts in the basement.”

But he argued that cities could reduce their greenhouse gas emissions by 50 percent or more by linking streetcars and higher-density land use. Making communities walkable and bikeable also could help.

One major challenge would be getting public buy-in, Condon said. Half of the public “doesn’t believe climate change is a problem.”

There is, however, a certain amount of nostalgia for streetcars. Many baby boomers and their parents recall the days when it was possible to hop on a trolley and get to just about anywhere in the Twin Cities area.

900 streetcars
Up until the early 1950s, the Twin Cities had 900 streetcars and more than 500 miles of track that extended from Lake Minnetonka to Stillwater. On University Avenue, there were more than 60 cars operating during peak periods.

Annual ridership hit a peak of 238 million in 1920. It began to drop as automobiles became affordable and plummeted after World War II, when GIs returned home, formed families and sought that prized home in the suburbs. (By comparison, transit ridership last year was 91 million.)

The streetcar system came to an unfortunate end in 1954, when the last trolleys were pulled from the streets and replaced with buses financed by General Motors. In the conversion process, the transit system was defrauded by company executives and mobsters, several of whom went to jail. 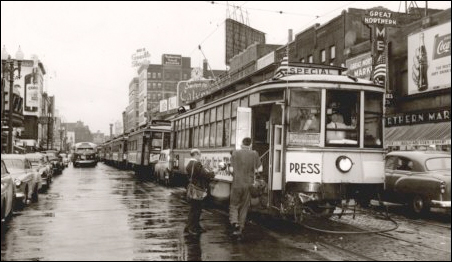 Hennepin County Library
The last run of the streetcars in Minneapolis on June 19,1954.

Condon said there are solid environment and economic reasons for bringing back the trolley. A modern low-floor tram [PDF] manufactured by Siemens has the lowest greenhouse gas emissions per passenger mile of all transportation options.

Streetcars also are more affordable, with a capital cost of $20 million to $40 million per mile compared with $60 million to $100 million a mile for light rail transit.

Key density goal
The key, Condon said, is to achieve sufficient density — 10 to 40 residential units per acre — to support the investment. “You could marry transit to land use in a way where you don’t have to subsidize it at all,” he says. However, he acknowledged that achieving that density goal “is going to be very hard.”

In the Twin Cities, the typical urban neighborhood might have a density of seven to 10 units per acre, while the density in developing suburbs is more in the range of two to four units per acre. The Metropolitan Council requires a minimum of three units per acre in areas where communities want regional sewer service.

Both Minneapolis and St. Paul have expressed interest in streetcars, and Minneapolis landed a $900,000 federal grant to explore the idea. The city has embarked on a study of a possible nine-mile line along Nicollet and Central Avenues from 46th Street in south Minneapolis to a transit station just outside of Columbia Heights.

St. Paul failed to win a $200,000 grant to conduct a study of its own, but Joe Campbell, a spokesman for Mayor Chris Coleman, says the city is “pursuing other options” to fund the effort.

Metro Transit, meanwhile, is studying another option — a form of bus rapid transit (BRT) — in 11 urban corridors in the two cities. It is would include such features as distinctive vehicles with traffic signal priority, heated bus shelters, off-vehicle fare collection, real-time travel information, more frequent service and faster trips.

The capital cost for urban BRT would be about $2 million to $5 million per mile, according to Metro Transit planners.

Are streetcars the answer to our transit and environmental needs?