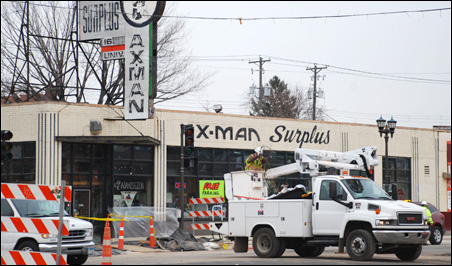 Photo by Laura Baenen
A crew working on new traffic lights at Fry on University Avenue.

Last week, a group representing businesses along University Avenue were back in federal court, complaining that the financial assistance being provided to help them during light rail construction has been inadequate.

“Customers are not willing to navigate the congested, treacherous and ever-changing traffic patterns of University Avenue,” said a motion filed by the University Avenue Business Association. “The sounds and vibrations of jackhammers, revving engines of heavy-duty equipment, honking and yelling create a ruckus.”

The group and the St. Paul chapter of the NAACP renewed an earlier request that the court halt construction of the $957-million Central Corridor LRT project. The Midway and St. Paul Area Chambers of Commerce are not parties to the action, and remain supportive of the project.

The court action came as the project neared the end of its first year of construction on the street, sidewalks, rail bed and stations on Fourth Street in downtown St. Paul and on University Avenue west of Hamline Avenue.

Lanes reopened
Contractors reopened the lanes on the north and south sides of University to traffic on Wednesday, although lane restrictions remained in place in several locations. Construction is not scheduled for completion until 2014.

The Metropolitan Council, the cities of St. Paul and Minneapolis, and several philanthropic partners put together an $11.1 million package to help businesses survive construction.

It includes $4 million in zero-interest, forgivable loans of up to $20,000 for small businesses with less than $2 million in sales to compensate them for revenue lost during construction.

Adequate or not, direct financial assistance to businesses during the construction of infrastructure projects appears to be unprecedented in Minnesota. A former attorney for the Minnesota Department of Transportation says the department is not even permitted under state law to provide such assistance.

“If it turns out in a billion-dollar project that we can mitigate the most serious impacts on businesses for something less than $4 million, that might not be a bad thing,” Homans says. “We all see the benefit of this transit investment, and we all will enjoy the benefits.” 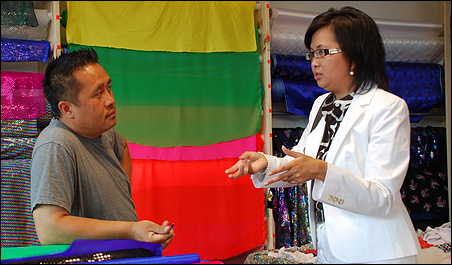 So far, Homans says, 60 businesses have applied for loans and 51 loans totaling more than $753,000 have been granted. Eight applicants were found to be ineligible, and one was granted a loan and then decided to close its doors instead.

“I am hearing that the people who go through the process find it easy to do — it’s not onerous,” Homans says. “Given that 26 of the 51 [loans] were for less than $20,000, it means we totally compensated them for their losses.”

Here is how the program works:

• Businesses are given loans compensating them for the decline in their sales from the average of the last three years or 2010, whichever is more beneficial to the applicant.

• One fifth of the loan will then be forgiven each year for the next five years that the business remains in operation in the corridor.

To simplify the process, Homans says, the sponsoring agencies did not attempt to make any deduction in the sales losses that might be attributable to the recession rather than LRT construction.

“Most of them are long-established businesses that want to stay in the corridor, and we want them to stay,” she says.

Interestingly, Homans says, the business losses documented in the loan process have not been nearly as severe as some of the claims made in public.

“A number of them have been quoted in the press saying, ‘Oh, I’ve lost 50 percent of my sales.’ Then they go through the loan process and say, ‘Oh, I guess it was more like 15 percent,'” she says. “It has really helped in some ways to clarify the impact of construction.”

Kari Canfield, president of the Midway Chamber, says she knows some of her members have applied for loans and “have received the maximum of what they have requested.” Whether the assistance is adequate “depends on who you talk to,” she says.

In addition, several programs have been funded to help promote patronage of Central Corridor businesses during construction, improve storefronts and provide technical assistance to business owners.