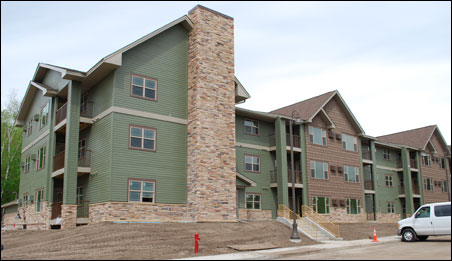 Courtesy of Met Council
The Twin Cities area is falling behind in affordable housing units like Hoffman Place, a 60-unit apartment building in White Bear Lake.

Twin Cities communities are lagging far behind their goals for the production of affordable housing, according to a new report from the Metropolitan Council.

And with the nation in a prolonged economic slump, the prospects for significantly increasing the supply of affordable owner-occupied and rental housing remain bleak.

In 2010, just 1,541 new affordable housing units were added to the region’s housing stock, according to the Council. While up slightly in each of the last two years, that’s down from the nearly 5,500 new housing units that were added in the peak year of 2001.

The 2010 production total included just 758 affordable owner-occupied units, the lowest output since the Council began collecting this data in 1996. 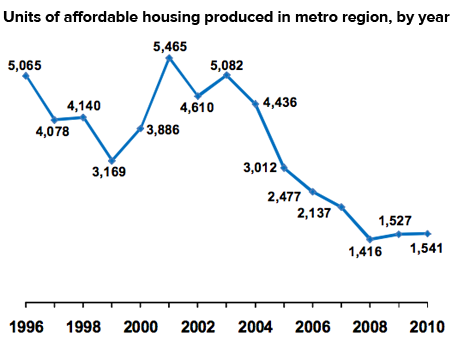 Source: Metropolitan Council
The number of affordable units produced by the region steadily decreased every year from 2003 to 2008.

“When we look nationally, very few communities are building any type of housing,” says Libby Starling, research manager for the Met Council. “On the supply side, builders are continuing to work through their excess inventories. They are also struggling to secure money to finance new construction as well as to find buyers. Affordable housing is a piece of that puzzle.” 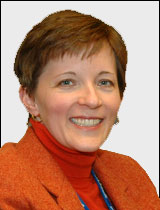 The decline comes at an unfortunate time for families that have been victims of the Great Recession.

“The mortgage foreclosure crisis has devastated families and neighborhoods, and the number of homeless, especially families and children, continues to grow despite determined efforts to prevent and end homelessness,” says the Family Housing Fund in its 2011-13 strategic plan.

As defined by the Met Council and the federal government, an owner-occupied home is considered “affordable” if  households with 80 percent of the region’s media income can pay the mortgage without spending more than 30 percent of their income. In 2010, this translated to a home priced at $233,100 or less.

For rental housing, units are considered affordable if they have monthly rents of less than $787 for one bedroom, $945 for two bedrooms and $1,092 for three bedrooms.

Big expense
However, for many Twin Cities families, shelter takes an excessive bite of their pay. In 2010, 35.5 percent of all households spent more than 30 percent of their income for housing, according to Wilder Research.

As Starling indicated, the precipitous decline in affordable housing production mirrors the overall construction of housing since the recession and the meltdown in the housing industry.

In 2010, communities in the region issued just 5,761 residential building permits. That’s down from a peak of 21,350 in 2004 and the third lowest total in the 40 years the Met Council has collected this data.

Looking to the future, the Council has identified the need for 51,000 new affordable housing units by 2020. However, if production continues at the pace of 1,500 new units a year, the region obviously would fall far short.

“Unfortunately, there are not a lot of tools available to help cities build affordable housing,” Starling says.

Patricia Nauman, executive director of Metro Cities, an organization representing 80 communities in the region, says her members are very aware of the need for affordable housing, but that they view it as a “shared responsibility.”

“What we have said continually is that cities have a role, but that the state has a role also,” Nauman says. “We have seen a continual diminishment of resources for affordable housing, and we would expect that these resource challenges will continue for some time.”

One encouraging sign in the Met Council report – affordable housing no longer is being concentrated in Minneapolis and St. Paul.

The top five locations for new affordable housing units include the fast-growing suburbs of Shakopee, Maple Grove and Woodbury.

Jim Solem, a former commissioner of the Minnesota Housing Finance Agency and a former executive of the Met Council, says some suburban communities are still reluctant to accept affordable housing, but that attitudes in many of them have changed over the last two decades.

Many local officials say they recognize their community needs a range of housing choices to accommodate the young people who grew up there, the empty nesters who no longer need large single-family homes, and some of the workers employed in the community.

“In many communities, mayors and city councils have stepped up to do the right thing,” Solem says.