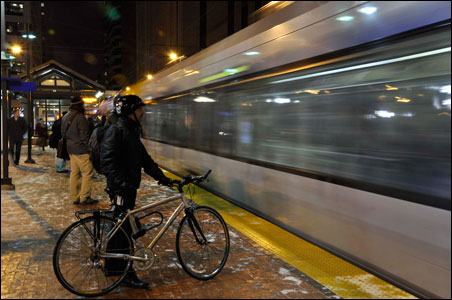 Photo by Jeff Syme
About 6 percent of private sector employees, and 10 percent of state and local government employees, receive tax benefits for transit or parking.

The federal tax code is riddled with questionable provisions designed to encourage or reward certain kinds of behavior. And it only seems to get worse.

The latest example: As a result of congressional inaction, the feds will now provide a maximum tax benefit of $125 a month for people who commute to work by public transit or vanpools, only about half as much as the $240 monthly maximum  for commuters who incur parking costs.

For the past two years, Congress provided equal tax treatment for commuters who incurred costs for parking or public transit — $230 a month.

However, the two houses allowed the equal-benefits provision to expire at the end of 2011. As a result the maximum transit benefit reverted to $125 a month, while the maximum parking benefit automatically increased to $240.

Transportation for America — a coalition of local officials, transit advocates and environmentalists — complained: “The federal government is sending a message loud and clear to commuters: they’d like you to start driving to work.”

“Federal tax law should not have a bias in favor of one method of commuting over another,” said Michael Melaniphy, president of the American Public Transit Association. “It is time to get this country back to work. Every American deserves a fair opportunity to access jobs, including those who chose to take congestion reducing, environmentally responsible public transportation.”

The impact of the change is likely to be greater in the nation’s largest cities, where commuting by public transit can be more costly. In the Twin Cities, the maximum cost of a 31-day Metro Transit pass is $113.50, less than the $125 maximum for transit tax benefits.

(The change could affect transit riders who use the Northstar commuter rail line, which has one-way fares of up to $7.)

In the Twin Cities, the generous federal tax benefit for parking works to encourage people to commute by car and utilize the most expensive structured parking — which is generally priced in the range of $200 to $250 a month.

Current federal tax law works in three ways: Employers can provide parking or transit benefits up to the maximums and receive a tax writeoff,  employees can ask that a portion of their wages be set aside tax-free up to the same maximums or employers and employees can share the costs.

The Downtown Minneapolis Transportation Management Organization (TMO) actively encourages employers to offer these benefits and “most downtown employers do,” according to Dan MacLaughlin, the TMO’s executive director.

Before Congress went home in December, Sen. Charles Schumer, D-N.Y., unsuccessfully attempted to extend the higher tax benefit for transit. He has indicated he will attempt to revive the measure and extend the benefit, retroactive to Jan. 1.

Making it more expensive for Americans to get to work is “the last thing we should be doing in this economy,” Schumer said. “The fact that this transit tax credit expired as the clock struck 12 on New Year’s is unacceptable, and I’m going to do everything I can to see the full extension of these commuting benefits.”