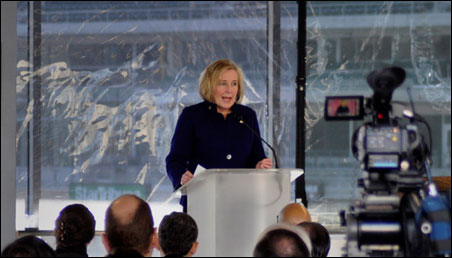 Metropolitan Council Chair Susan Haigh said Wednesday that the council will pursue state funding solutions that will enable further expansion of the regional transit system and resolve problems that leave “our major transitway projects in limbo, costing us time and money.”

‘New transportation option‘
Among some 100 transit projects around the nation, Haigh noted, Southwest is one of just a dozen that has received approval from the Federal Transit Administration to begin preliminary engineering. “Southwest light rail will provide a new transportation option for the existing 210,000 employees who work in the corridor, and it is already attracting new jobs and private investment,” she said.

However, Haigh added that the state needs to fix the current “ad hoc system” of transit funding, which relies heavily on limited resources of local governments and the vagaries of the legislative process.

“Our vision is to work together to continue to build a 21st century regional transit system with expanding regional services that connect people to and from work, school and home, and to work together to strategically support economic development along transitways that will produce robust local economies and grow jobs,” Haigh said.

Both the bonding request and any longer-term funding proposals could face tough going in the current, Republican-controlled Legislature, which has not been sympathetic to the needs of transit.

Shifts in emphasis
In her speech, delivered to a crowd of about 250 people in the Legends Club at Target Field, Haigh also signaled some shifts in emphasis by the Dayton-appointed Met Council from the course pursued during Republican Gov. Tim Pawlenty’s administration. Haigh said the council will:

Haigh said she chose Target Field as the venue to make her first regional pitch “because it reminds us that, just like building Target Field, the work we’re talking about today is not easy and it often requires bold leadership that cuts against the grain.”

Target Field also sits adjacent to a transit station that serves the Hiawatha LRT line, the Northstar commuter rail line and the Central Corridor LRT line, which is scheduled for completion in 2014. If it wins federal and state funding, the Southwest  Corridor LRT line will be essentially an extension of Central. The council’s current timetable calls for the completion of Southwest by 2018.