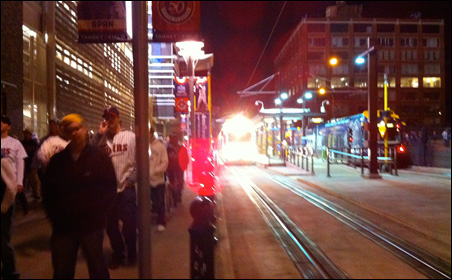 MinnPost photo by Steve Berg
Rail transit planning in the Twin Cities metro area is being driven by the counties, each of which would like a rail line or two.

Ramsey County will soon have a renovated depot with virtually no trains, while Hennepin County has hundreds of trains with no depot.  It makes you wonder who the heck is planning our rail transit system.

The answer is that rail transit planning in the Twin Cities metro area is being driven by the counties, each of which would like a rail line or two. Never mind whether they pass muster from a regional perspective.

The fault lies with the Minnesota Legislature, which authorized the metro counties in 1980 to each create a regional rail authority and levy property taxes to advance its goals.

This has enabled the counties to hire consultants, lobbyists and public relations firms to promote their favored projects, seek federal and state funding, and carry out the early planning. The Metropolitan Council, the body responsible for regional transit planning and operations, has largely sat on the sidelines until rail projects are ready for engineering and construction.

The problems with transit planning and governance were compounded in 2008, when the Legislature authorized the metro counties to create the Counties Transit Improvement Board (CTIB) and levy a quarter-cent sales tax for the development and operation of rail and bus transitways. Five of the seven counties took advantage of the law.

Who has the checkbook?
While on paper the Met Council remains responsible for transit planning, CTIB is the body that has the regional checkbook. And it has not been shy about producing maps showing rail lines favored by the counties that aren’t even in the Met Council’s 2030 transportation policy plan.

Some would argue that this dysfunctional system has worked, producing the Hiawatha light-rail transit (LRT) line that opened in 2004 and the Central Corridor LRT line that is scheduled for completion in 2014. Both of these corridors were identified as priorities in the Met Council’s first LRT planning efforts back in the early 1980s.

However, this same planning system also gave us the Northstar commuter rail line, which thus far been a major disappointment. Opened in late 2009, the 40-mile, $317 million line from Big Lake to downtown Minneapolis averaged fewer than 2,000 riders during its first year of operation. That’s 40 percent below the pre-construction estimate for its first year of service.

Issue of depots
But let’s get back to the issue of depots. You’d think this is a subject that would call for some careful regional planning. Think again.

For years, the Ramsey County Regional Rail Authority (whose members are the same as the County Board) have dreamed about renovating St. Paul’s Union Depot and recapturing the grandeur of a bygone era.

With the help of U.S. Rep. Betty McCollum and others, the county is sinking $243 million into the acquisition and renovation of the 85-year-old depot, with more than $124 million coming from federal sources. The depot, which once served 280 trains and 20,000 passengers a day, has been closed to rail passenger traffic since 1971.

The building includes 62,400 square feet of leasable space and another 45,000 square feet of public space that can be used for large events, retail kiosks and other activities. The county is now seeking private partners to develop and manage this facility in a downtown awash in vacant retail and office space.

The drawback is that the depot will serve just two Amtrak trains a day, plus buses of Greyhound and Jefferson Lines.

The county also talks about it serving as a hub for Red Rock commuter rail line from Hastings and the Rush line from Hinckley, as well as high-speed rail from Chicago. However, those lines (shown on the CTIB map) remain remote possibilities at best and aren’t even included in the Met Council’s 2030 plan.

Indeed, the council says, its studies indicate that “no commuter rail corridor other than Northstar would have enough rider­ship to justify intensive investments.” In other words, the Red Rock and Rush lines would have lower ridership and require higher per-passenger subsidies than Northstar.

Meanwhile, Hennepin County is scrambling for funds to expand the rail transit station adjacent to Target Field. It is $30 million short of the $67.7 million needed for the so-called “Interchange“ transit hub,  which would serve the Hiawatha and Central Corridor LRT lines, the Northstar commuter rail line and (if approved and funded) the Southwest Corridor LRT line from Eden Prairie.

With the completion of Central in 2014, this station will be the site of 500 train arrivals and departures per day.

So, Hennepin County has plenty of trains, but so far no depot. Earlier this month, the county asked private partners to submit proposals for commercial and retail development, parking management and naming rights for the upper plaza area. The county somehow hopes to complete the project before the Central Corridor LRT line begins operation.

Both of these “multi-modal transit hubs” are included in the Met Council’s latest transportation policy plan. But the council was hardly enthusiastic until the appointment of Susan Haigh, a former Ramsey County commissioner, as council chair.

When it comes to transit planning, the counties are in the driver’s seat.