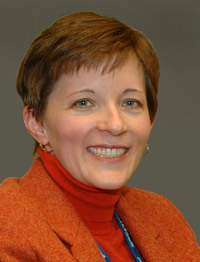 The good news, says the Metropolitan Council’s Libby Staring, is that “the economic recovery has begun.” The job supply in the region is growing and the unemployment rate is falling.

The bad news is that employment in the metro area still hasn’t returned to its peak level in 2007 or even to the level at the start of the last decade, and that the Twin Cities is lagging behind many of its regional peers in job growth.

Starling, the council’s research manager, reported on Twin Cities employment trends in a presentation last week to the council’s Community Development Committee.  She noted that employment is a key factor not only in the region’s economic well-being, but also in its development and land-use patterns. 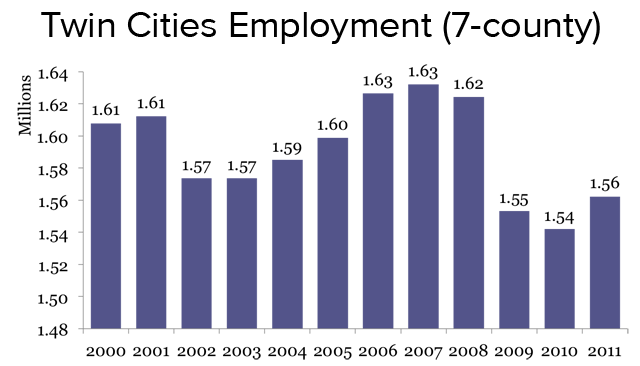 Employment is rising again in the Twin Cities, after dropping off severely in 2008.

Starling said the unemployment rate in the seven-county metro area was 5.3 percent at the end of 2011, compared with 8.3 percent nationally, and that it has trended 2-3 percentage points below the national rate for the last several years.

“The unemployment picture is better in the seven-county area than it is nationally, and in both cases the rate is falling,” she said.

Starling said total employment the seven-county area has begun climbing since reaching its low point in 2010. However, she said, the latest figure of 1.56 million jobs for 2011is still 70,000 below the peak year of 2007 and 64,000 below the number of jobs the region had at the start of the last decade in 2000.

The Twin Cities metro area historically has compared favorably with its peers in many areas, including educational attainment, labor force participation and home ownership. But job growth over the last 12 years is not one of them.

During the years 2000 to 2011, Starling said the number of jobs in the region declined by 1.4 percent, eighth worst among the nation’s 25 largest metro areas.

“Certainly, our job loss pales in comparison to Detroit or even San Francisco, which saw the dot-com bust,” Starling said. “But there are a number of regions we think of as our peers that have seen job growth over the 2000-2011 period.”

In the Twin Cities metro area, Starling said the segments of industry with the largest employment gains over the last 12 years were education and health services, leisure and hospitality, and financial activities.

The segments with the biggest losses were those that historically have included well-paying blue collar jobs: manufacturing; trade, transportation and utilities; and construction.

Last fall, Twin Cities business leaders announced the formation of a new group – Greater MSP –  to market the region more aggressively and “with one voice.”  Its goal: to once again grow jobs at a faster rate than the national average and add 100,000 jobs over the next five years.

Starling indicated that the largest increases in employment over the last 12 years have taken place mostly in the outer-ring suburbs, while the developed core of the region has lost jobs.

Changing employment patterns, as well as a slow-down in population growth, are among the factors that the Met Council will likely consider as it prepares its next Regional Development Framework to guide future growth. The council already has begun work on the 2040 framework, which it plans to complete by 2014.

The framework, along with new population and job forecasts, will be provided to every community to help them update their local comprehensive plans. It’s all part of a once-a-decade planning process required by state law.