The growth of the Twin Cities metro area is expected to slow dramatically in the next three decades, reaching 3.74 million by 2040, according to the Metropolitan Council’s latest forecast [PDF].

Not surprisingly, the forecast issued Wednesday also shows the population of the seven-county area growing older and more diverse, which will affect the future demand for housing, schools and other services.

The forecast also shows the region’s total employment rising from 1.55 million jobs in 2010 to 2.12 million jobs in 2040, and its Gross Metro Product – the total value added by all industry sectors – rising to $400 billion. That’s about 1.5 percent of the U.S. Gross Domestic Product coming from the region, which accounts for less than 1 percent of the nation’s population.

The council’s once-a-decade growth projections will be used to inform its next metropolitan development guide, which the planning agency will use to help shape regional growth through the 2040. The regional forecast will be followed next year by projections for each city and county, which they will use to update their local growth plans. 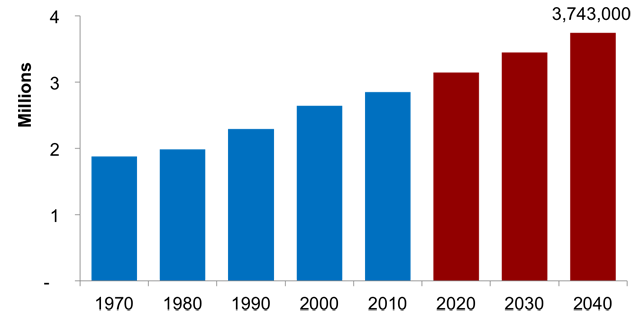 Courtesy of the Met CouncilTotal growth 2010-40: Up 893,000; two-thirds from natural growth, one-third from migration.

Regional population grew at rates of 15 percent a decade in the 1980s and 1990s before falling off in the second half of the last decade.

One-third of the growth will result from migration. The council expects the region to gain 463,000 residents from international migration while losing 179,000 people to domestic out-migration. Of the expected international immigrants, 83 percent will be people of color.

Libby Starling, the council’s research manager, said the forecast raises a number of questions that must be addressed in the council’s next metropolitan development guide to help ensure the orderly, economical growth of the region. Called Thrive MSP 2040, that guide is expected to be completed by early 2014.

Among these questions, Starling said, is how the council will ensure an adequate mix of new housing. She said only about a third of the new households will have children, but that immigrant families will be larger than white families.

Starling said at least half of the new households will have only one income, raising concerns about housing affordability as well as access to public transit. The graying of the population also will present challenges concerning appropriate locations for senior housing, adequate transportation and access to services, she said.

Once the council completes its 2040 development guide – as well as system plans for transportation, aviation, water resources and regional parks and open space – local governments must prepare or update comprehensive plans that are consistent with the council’s regional plans. That process is expected to be underway by the middle of the decade.