Within the next year or two, there’s the potential for a three-train pileup at the state Capitol.

Local officials from the southwest, northwest and east could be converging simultaneously at the Capitol seeking $100 million or more in state funding for each of three possible light-rail transit (LRT) lines – in the Southwest, Bottineau and Gateway corridors.

That could be mission impossible if Republicans retain control of the Legislature in this fall’s election. In the current legislative session, both houses have resisted providing even a $25 million down payment on the state’s share of the cost for the proposed $1.25 billion line in the Southwest Corridor between downtown Minneapolis and Eden Prairie.

Multiple capital funding requests for transit could be a challenge even if more transit-friendly DFLers capture legislative control this fall. Transit requests of $300 million or more would constitute a huge share of any state bonding bill. Bonding bills typically are approved in even-numbered years and run in the range of $600 million to $1 billion.

Last September, the Federal Transit Administration (FTA) granted approval for the Metropolitan Council and its project partners to begin preliminary engineering on the 14-mile Southwest Corridor line. Since then, the council has rented space for a project office, begun hiring staff and solicited proposals for engineering services.

However, the project could be delayed, if not killed, unless the Legislature begins providing its 10-percent share of the funding – $125 million.

Under FTA rules, the council cannot even apply for 50-percent federal funding of the project until commitments are in hand for the 50-percent state/local share. In addition to the state’s 10 percent, 30 percent would come from the Counties Transit Improvement Board through its quarter-cent sales tax and 10 percent from Hennepin County.

Rep. Mike Beard, R-Shakopee, chair of the House Transportation Committee, has vowed to stop Southwest “in its tracks,” though he suggested late last week that he might be open to some high-level political horse trading with DFL Gov. Mark Dayton.

Meanwhile, Hennepin County officials are preparing to propose another major transit investment – this one in the Bottineau Boulevard Corridor between downtown Minneapolis and Maple Grove or Brooklyn Park.

In a briefing last week for the Met Council’s Transportation Committee, Joe Gladke of Hennepin County said the county intends to recommend a “locally preferred alternative” for the transit mode and alignment in June.

Gladke, the county’s manager of engineering and planning, said county officials hope the Met Council would approve that recommendation before the end of the year and apply for federal approval to begin preliminary engineering.

Though he indicated the mode remains to be determined, Gladke strongly hinted that the decision will be LRT. He said the latest projections show LRT attracting 26,000 to 27,600 riders per day by 2030, depending on the alignment, compared with 19,600 riders per day for BRT.

Indeed, Gladke said that under the BRT option, it would not be possible to put enough buses on the street to meet the projected ridership demand. He also said the project’s policy advisory committee, made up primarily of local officials, “has expressed some preferences for LRT.”

Gladke said final cost estimates are not yet available. In previous studies, the county estimated that LRT would cost between $900 million and $1.2 billion, while BRT would be about $400 million less expensive. 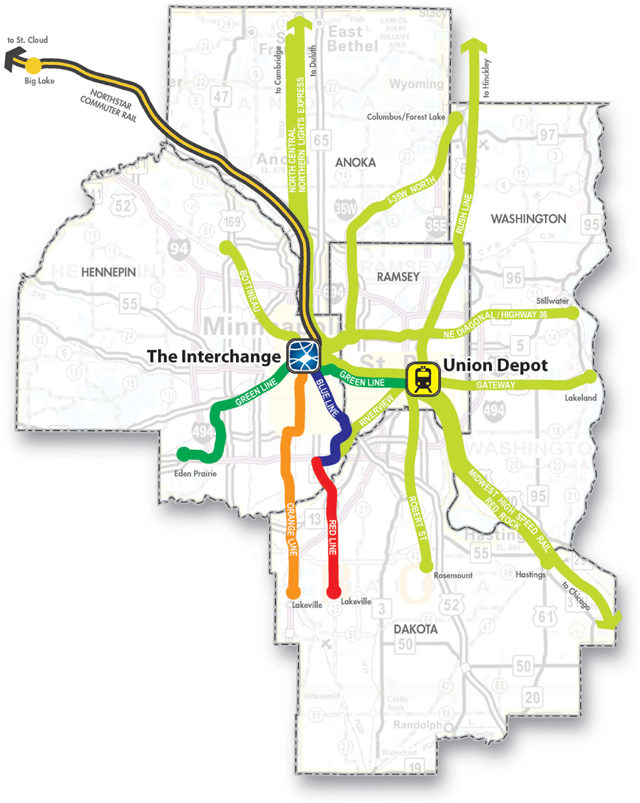 The studies, led by Washington and Ramsey counties, have been evaluating multiple alternatives, including LRT, BRT, commuter rail and operating buses in high-occupancy toll lanes such as those on I-35W and I-394. So far, the only option that has been ruled out is commuter rail because of the high cost and comparatively modest ridership.

Ted Schoenecker of Washington County, the project manager, said the alternatives analysis should be completed this summer, after which an environmental review is required. That timeline could have the project seeking state funding in 2014.

The cost of the alternatives being evaluated range from $420 million for BRT to nearly $1 billion for LRT. But light rail could prove to be a tough sell for the FTA, much less Republican state legislators. It is projected to attract only 9,100 riders per day, about a third of the riders projected for both Southwest and Bottineau.

Many East Metro officials complain that their part of the region has been left out of major transit improvements, notwithstanding the current construction of the $957 million Central Corridor LRT line   between downtown Minneapolis and downtown St. Paul.

Washington County Commissioner Lisa Weik, chair of the Gateway Corridor planning effort, told the Met Council committee that the Gateway corridor “should be a regional priority.” She noted that it is home to major businesses such as 3M, and said “we need to be competitive in order to attract and retain businesses.”