You may think it’s a tasty treat, but for urbanists, the popular baked good has served as a metaphor for the American city — a fat, sweet ring of rich suburbs encircling an almost empty inner core. Go to St. Louis or Houston or Charleston, and you find humming businesses, shopping centers and brand-new housing — 20 miles out. Meanwhile, acres of downtown lie fallow, surrounded by crumbling neighborhoods inhabited by the poor and the newly arrived.

The doughnut, however, almost without our noticing, has been undergoing a dramatic change. Many of those vaunted suburbs are becoming homes to the poor, to immigrants and to minorities, while central cities are gradually attracting the affluent and educated. That’s the argument of “The Great Inversion,” an interesting new book by Alan Ehrenhalt, executive director of Stateline, a daily news site operated by the Pew Research Center.

“We are living at a moment in which the massive outward migration of the affluent that characterized the second half of the twentieth century is coming to an end,” he writes. At the same time, cities are seeing African Americans move out to the suburbs and new immigrants land there rather than starting their lives in the central city.

Cities across the nation show evidence of the trend. Chicago, Ehrenhalt notes, lost nearly 180,000 black residents in the 10 years ending in 2010. At the same time, its downtown population has grown by 48 percent to 165,000; the city expects it to reach 230,000 in the next 10 years. Wall Street and Lower Manhattan, in the wake of the 9/11 attacks, have become a preserve for upscale young couples with children. Atlanta’s black population decreased by 10 percent, and its Latin and Asian immigrants bypassed the inner city to create thriving enclaves in suburban Gwinnett County.

Inversion is visible in the Twin Cities.

“Affluent people are moving in along the river, living by the Guthrie,” says Myron Orfield, a law professor and director of the Institute on Race and Poverty at the University of Minnesota and a fellow at the Brookings Institution in Washington, D.C. “But it’s not huge,” he adds.

Less affluent professionals, Ehrenhalt points out, have populated the Seward neighborhood near the University, where coincidentally his adult daughter now lives. Similarly, suburbs have seen steady growth in their immigrant populations.

In 2000, some 113,000 who were born elsewhere lived in suburbs and exurbs. Ten years later, the Metropolitan Council reports an increase to 308,000. Richfield and Shakopee, among others, have become Mexican enclaves, and Eden Prairie and Brooklyn Center cores for Somalis.

“More than half of the metro area’s blacks and Latins live in the suburbs,” says Orfield. One result has been a sharp increase in poverty in Twin Cities suburbs.

African-Americans have also increased their presence in the burbs — usually those that housed working-class whites. According to the Metropolitan Council, Brooklyn Center and Brooklyn Park have higher percentages of people of color than the central cities of St. Paul and Minneapolis. In 11 suburbs, one-third of the residents are nonwhite; in another 11, one in four.  Carole Just, a neighborhood activist from St. Louis Park, which has seen an influx of black residents, says, “We’ve gone from white bread to cracked wheat”—a population mix, she contends, that’s crunchier and more interesting than previously.

This turn-about process, right now, is in its early stages. Suburbs remain largely white and wealthy, while center cities are still much less so. But if the de-doughnut-ification trend continues, the United States could end up with more European-style cities, which historically consigned the poor to the outskirts leaving the affluent to cavort in the parks, theaters and cafes downtown.

At the awful extreme of this pattern, you have something like modern-day Paris, where poverty-stricken families inhabit towering housing projects in the banlieus far from the jobs and the cultural life of the city — but close enough to inflict damage in angry riots in 2005 and 2007. 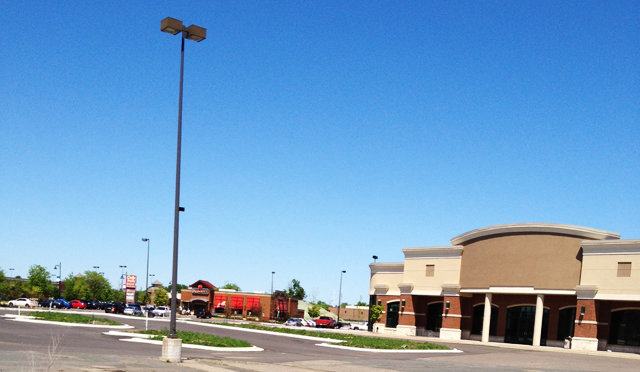 MinnPost photo by Marlys HarrisAnticipated redevelopment of Brookdale Mall will include a Walmart.

What is causing the shift? For the affluent, the city has become more appealing. One reason: deindustrialization. Back 50 and 60 years ago, when the suburban surge began, cities were sites for heavy manufacturing. Few cities these days produce downtown. Here in the Twin Cities, the flour and lumber mills along the river have long since disappeared and with them the grime, noise and pollution that sent families to the suburbs to escape. A drop in violent crime since the 1990s has also helped to lure people to the city — or at least make them feel less urgent about leaving it.

Millions of Americans ensconced in the burbs are not dropping everything to surge into town, however. They couldn’t do so even if they wanted to since the collapse in housing prices has prevented them from selling their large suburban homes. It’s more, Ehrenhalt suggests, that a younger generation, one that grew up in the suburbs, finds them less entrancing than their parents.

“This is the generation that grew up watching ‘Seinfeld,’ ‘Friends’ and ‘Sex in the City,’ mostly from the comfort of suburban sofas,” he writes.”I do not claim that a handful of TV shows has somehow produced a new urbanist generation; obviously, it is more complicated than that. But it is striking how pervasive the pro-city sensibility is within this cohort, particularly among its elite.”

Carole Just puts the lure of urban living in more practical terms: “People in their 30s — they want to be close in, they want to be near bike trails, they want to walk to shopping, and they want neighborhood restaurants.” And, she says, they plan to have all that with kids. “Maybe if they give birth to a third child, they’ll move out to the suburbs,” she adds.

Drawing the former or traditional Twin Cities inner-city populations out to the suburbs are jobs. According to Orfield, they have decentralized, with those in the service sectors clustering in first- and second-tier suburbs. A decline in affordable housing in the inner cities and a yen to escape crime and crowding propel others outward.

Once a few former inner-city residents or a clump of immigrants of one nationality establish a beachhead, more follow.

A less benign reason for this clustering, says Orfield, is steering by real-estate agents. A paper  he coauthored with Katherine Fennelly, a professor of public affairs at the Humphrey School of Public Affairs, took note of a developing suburban segregation “exacerbated by real estate agents who steer white residents away from integrated neighborhoods claiming that ‘the schools are bad,’ while simultaneously recommending the same neighborhoods to residents of color promoting the schools as ‘integrated.’ “

The turnabout, speculates Ehrenhalt, may make cities themselves stronger. New (or staying) affluent residents will strengthen the business climates and an already fairly strong tax base. Rising rents, he contends, cause less displacement of the poor than previously believed, and “the lives of those remaining are enriched” by a revitalized city.

Suburbs that have seen an increase in poorer residents with fewer English language skills face big challenges, however. With their smaller and less stable tax revenues, they’ll have do provide more intensive social services, schooling and even transportation help to keep the Twin Cities from gravitating toward the Parisian model.

The doughnut may be turning into one of those whole-grain breads, but it will definitely need some shoring up at the edges.