The sun is coming out, and the sky is bluing up. My stomach is comfortably packed with a big breakfast and my brain in receipt of its daily dose of mood-mellowing medication. So why do I feel dejected?

This six-lane stretch of roadway between downtown Minneapolis and the Federal Building in Bloomington — about 15 miles — seems as barren as a desert. There’s some industrial stuff, rail yards, a Walgreens and a gas station, but little else that would make you want to look twice, much less park and walk. Visual relief only comes at the southern end, around Fort Snelling, where stonewalls are draped with enough decorative vegetation to make me stop humming “Suicide is Painless.”

Yes, I know it’s a state highway and not supposed to be lovely, but in some ways, Hiawatha is bleaker than an Interstate. On a freeway, you can go 60 or 70 miles an hour, making a dreary landscape speed by quickly. On Hiawatha, it’s pretty much stop-and-go with lights lasting as long as a minute, forcing you to take in every drab detail. And pity the light rail passengers who disembark at, say, 38th Street or 46th Street. The road is so wide and the distances between one forlorn block and another so ostensibly vast that the place seems to swallow people whole, both body and spirit. 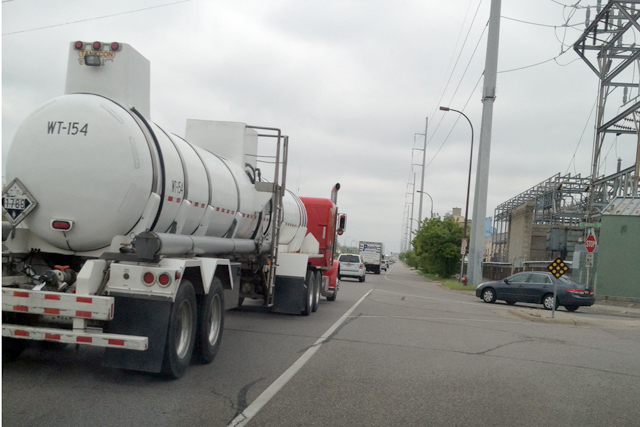 One of the arguments for light rail along the so-called Hiawatha corridor was that it would bring development to the areas around it. And Hiawatha does look better, or more sanitized, than it did back in the ancient days of my childhood when it was lined with auto parts shops and junkyards. There are trees, albeit stubby short ones that I can’t identify. But where are people? Where are the stores? Where is the housing? If this is what development looks like, what’s going to happen on University Avenue, where the central corridor light rail is now under construction? Will we be faced with another desert of nothingness that propels people from one stop to another without doing anything about what’s in-between?

Well, according to the Metropolitan Council website, the avenue has already arrived. “The Hiawatha line has proven to be a powerful catalyst for development in a corridor that once had large tracts of vacant and underutilized land,” it proclaims.

Seriously? I don’t see it.

The reason for that, says David Frank, director of transportation development for the Minneapolis Department of Community Planning and Economic Development, is that you can’t see it. “It’s not visible from the road, but it is there,” he insists. Since the light rail launched in 2004, some 8,000 housing units have gone up, most of them downtown, but there are 2,000 along Hiawatha from Cedar-Riverside on the north to the Veterans Hospital on the south.

That’s actually pretty good, says Karen Lyons, a transportation planner with the Metropolitan Council. The initial design projected an addition of 2,000 apartments by the year 2020. “We surpassed that in 2010,” she says, “and more are popping out of the ground all the time.”

And if you slow down your car or, heaven forfend, get out of it, you can glimpse the new buildings. Station 38 Apartments (on 38th) and Hiawatha Flats (off 46th near Walgreens) are two new ones that I discovered. All these developments, however, lie a few blocks off Hiawatha; they do nothing to make the avenue itself more inviting, user friendly or even plain old useful. There’s still nothing to look at and nothing to buy unless you need a tank of gas or an Alka Seltzer.

That will change a bit in the fall of 2013 when Longfellow Station, a 180-unit housing complex, rises right on Hiawatha itself, at 38th. According to Paul Keenan, project manager at Sherman Associates, the developer, planters and shrubbery will separate the building from the road to cut down on noise. More encouragingly, the building will add 10,000 square feet of retail space for small stores, maybe a sandwich shop, coffee house (we can never get enough of them apparently), dry cleaners and/or superette. Sherman would like to lease to, say, Starbucks or CVS, says Keenan, “but they all want drive-throughs, and the zoning laws prohibit them.”

Development would have come faster were it not for the recession. Now that the worst is over, builders are expressing interest in properties both on Hiawatha and on University, says Lyons. “It’s occurring on small lots as in-fill, so the growth isn’t obvious,” she adds. Even so, there are no plans to turn Hiawatha into a major shopping street, or even a minor one. The vision instead is to develop commercial and housing nodes on the side streets around light-rail stations. Hiawatha would continue to be Hiawatha, shunting commuters into and out of downtown.

I would hope that we could do better than that. Even with the creation of village-like centers around stations, Hiawatha would continue to be a divider, not a uniter.  Crossing the road, especially on corners where there are no lights, takes the boldness of Evel Knievel and the speed of Randy Moss. Some residents might find it easier after they get off the train, to go home and drive to the nearest Target or Rainbow to pick up a loaf of bread rather than to put their lives on the line to get to a store on the other side.

Moreover, if the two neighborhoods — Powderhorn on the west and Longfellow on the East — aren’t somehow joined, the commercial enterprises in the nodes won’t draw enough customers to survive and flourish. Hiawatha itself needs to be a boulevard lined with housing, shops, restaurants, parks and, yes, parking, because Twin Citizens are not likely to give up their cars until gas costs $15 a gallon.

What would such a transformation take? Time, obviously. A lively street doesn’t happen overnight, and, says David Frank, “a train by itself is not sufficient” to create development. “The market has to be ready,” he adds. Increased usage of the train line — it now carries nearly 30,000 passengers a day — developers’ heightened interest in the area, not to mention soaring fuel costs and the greater inconvenience of long-distance commuting, suggest that the market is coming along.

Perhaps what we need most is a change in perspective. For years we’ve termed Hiawatha a corridor. A corridor is something you pass through, not something you go to. It’s unlikely that Hiawatha will ever become the Champs Elysée or Avenida 9 de Julio in Buenos Aires, two city roadways that carry loads of traffic but also draw hordes of pedestrians and support hundreds of appealing businesses. But if we start to think of Hiawatha as a destination, we will be able to figure out what we want there and then build it.

Hiawatha struggles to become a destination, not a corridor