It’s been nearly a century since the French architect and planner Le Corbusier envisioned La Ville Contemporaine, a city whose centerpiece was a cluster of 60-story towers set in a lush park. His aim was to clean up urban squalor, give all residents access to green space and make city living more efficient.

Today his vision has become a reality — with a major difference. We now have towers, not in a park, but in a parking lot, actually in lots of lots.

Many U.S. cities today, Minneapolis and St. Paul among them, can brag of gleaming business districts with skyscrapers rising 30 and 40 and 50 stories high. Glimpse them from afar and, unless you are made of stone, your heartbeat quickens at the thought that you just might be near the center of the universe — or at least at an exciting nexus of commerce, culture and cosmopolitanism.

Walk or drive a few blocks from that center, however, and you find yourself in a vast tundra filled with awkward metal growths variously named Honda, Chevrolet, Ford and Toyota. At night and on the weekend, they disappear, and what you see is a wasteland of blacktop. For all the stimulation you get, you may as well be in the farther reaches of Siberia or the Australian Outback, depending on the weather.

Eran Ben-Joseph, a professor of landscape architecture and planning at M.I.T. and author of a new book, “Rethinking a Lot: The Design and Culture of Parking,” estimates that there are nearly three nonresidential surface parking spaces for every car in the United States. That, he says, adds up to almost 800 million spaces covering some 4,360 square miles, a stretch of land bigger than the island of Puerto Rico.  Surface parking lots (we’re not talking ramps here — they’re a topic for another day) comprise a third of some cities’ land area, making them, says Ben-Joseph, “one of the most salient landscape features of the built world.” Considering what eyesores they are and what other things you might rather be looking at, like stunning architecture, historical monuments or appealing store fronts, not to mention flowers or waterscapes, that’s a pretty sad observation.

Parking lots aren’t just unsightly (and it’s not just me; every city planner I talked to sighed and said, “Yeah, they are so ugly”), they’re lousy for the environment. Their dark horizontal expanses absorb sunlight in the summer, transforming cities into heat islands that are as much as several degrees warmer than surrounding suburbs. Lots, rather than automobile traffic or heat leakage out of buildings and factories, account for most of the excess heat. The increase in temperature not only raises the cost of cooling buildings but also “cooks” pollutants such as nitrogen oxides into smog, lowering air quality. Lest we forget, the American Lung Association in a recent report proclaimed that the Twin Cities air is becoming dirty enough to violate federal health standards.

With their impervious surfaces, parking lots also collect extra millions of gallons of storm runoff. Rainwater combines with a large variety of pollutants. Normally, they would percolate into the soil where they are absorbed by plants or filtered into groundwater. But with lots, the water flows into storm drains, which carry pollutants straight into streams, rivers and lakes. And the quantity is huge. According to a North Carolina paper,  storm-water runoff from one inch of rain falling on one acre of meadow would fill a room with two feet of standing water. “The same amount of rainfall on an acre of parking lot would generate enough runoff to fill three rooms with water from floor to ceiling.”

The omnipresence of lots, downtown at least, is partly a reflection of economics, says Ben-Joseph. Almost no land use is less profitable than a parking lot, other than maybe an empty lot. A real estate developer would much rather raise an apartment or office building, but without a market for the space, well, here comes another parking lot.

“Minneapolis is going in the right direction,” says Ben-Joseph. Washington Avenue, he points out, “was once practically all parking lot.” Now it’s got a line-up — an incomplete one, to be sure — of condos, stores, restaurants and office buildings.”

Fifteen or 20 years ago, he says, Boston, and Minneapolis looked about the same — similarly filled with parking lots. Since then, growth has squeezed out surface parking lotsin Boston, forcing Bostonians to take public transit, walk, bike or park cars in ramps.

A couple of decades could pass before that evolution occurs in the Twin Cities. In the interim, it’s unlikely that people will give up their cars, and they’ll need to have places to store them. So we’re pretty much stuck with lots a lots. That, however, doesn’t mean that we can’t improve and use them better.

“Too many developers think of parking as what’s left over,” says Ben-Joseph. Instead, they and the rest of us should see parking lots as “public spaces” that affect how cities look and affect the natural environment.

So what’s to be done? Well, for starters, asserts Thomas Hylton, author of “Save Our Land, Save Our Cities” and former chairman of the Pottstown (Pa.) Planning Commission, we should festoon the darned lots with shade trees, and not just a few scattered around the edges or a clump deposited in a corner, as many zoning codes mandate, but throughout. 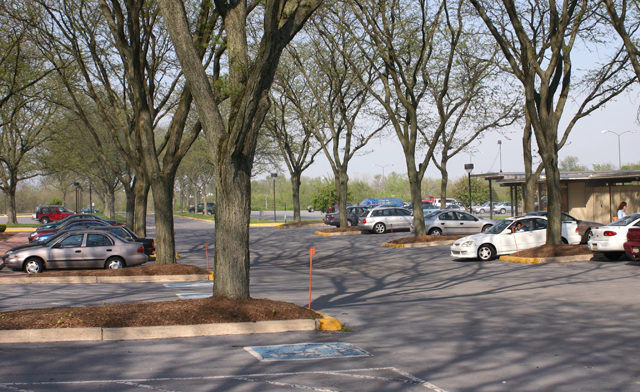 “A tree trunk takes up only five square feet of horizontal space,” he says. So you could plant one at the juncture of every two or four spots without forcing the lot owner to lose any revenue. After they’re grown, each tree spreads a canopy of branches the size of a house. Line-ups of our chariots would be almost invisible in daytime hours as would blank ugly stretches of tarmac at night.

Trees offer more than just aesthetic benefits, however. They absorb rainwater and send it down into the earth where it belongs. They also help to cool down cars and adjacent buildings. Imagine not having to blast on your air-conditioner immediately upon entering your car on a summer day. According to the EPA, “trees can decrease evaporative emissions from cars and filter pollution from the air.” Trees can also muffle the sometimes unnerving roar and rumble of the city. During the winter, says Gayle Prest, Minneapolis’ sustainability manager, conifers can even cut down on wind. And, get this: Two U.S. Forest Service economists in a three-year study found that the increased height of crown areas (those are the branches and leaves on the treetops) correlated with decreased crime. They’re not quite sure why, but it’s certainly a point worth considering.

Planners in the Twin Cities are no slouches, and they have been thinking about all this. St. Paul’s zoning code requires “perimeter landscaping,” and parking lots with more than 20 spaces or 6,000 square feet of pavement must have interior landscaping or islands equal to 15 percent of the paved area and must include shade trees. Minneapolis has similar requirements, but according to Beth Elliott, principal city planner for downtown Minneapolis, a new lot must submit plans to show that it complies, but lots in existence before passage of the code in 1999 are pretty much off the hook because of the time and effort it takes the city to make owners conform. “We send out a letter, and they ignore it,” she says. “Then we send another letter, and they say ‘no.’ Eventually we have to go to court. It’s an arduous process.” 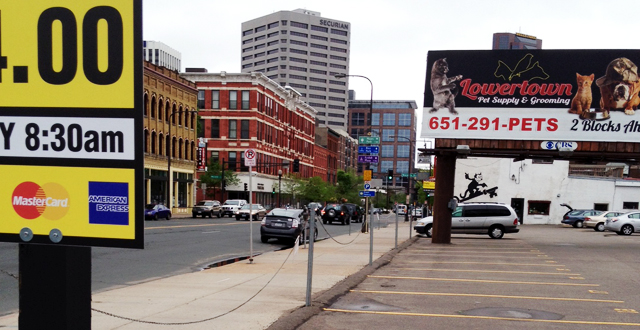 MinnPost photo by Marlys HarrisSt. Paul’s zoning code requires parking lots with more than 20 spaces or 6,000 square feet of pavement must have interior landscaping or islands equal to 15 percent of the paved area and must include shade trees.

Maybe so, but perhaps it’s a process worth pushing. Trees take 10, 15 and 20 years to grow to their full heights; so it’s better to start now rather than later. When developers start to see the results in one area — and to understand how a landscaped lot can improve their image, particularly at suburban Targets and Home Depots, which are surrounded by parking deserts, says Ben-Joseph, “they will see the need to change.”