When I was growing up, Hennepin Avenue was the soul of the city. As far as I was concerned, there was no more exciting, cosmopolitan place to be. The theaters, like Radio City, the Orpheum and the State, where I attended movies and occasionally served as an usher for Broadway shows, were grand, with chandeliers, marble staircases and powder rooms reminiscent of Versailles. My dad regularly took me for lunches at the 620 Club, which I later learned was a mob hangout, the DiNapoli and the nearby Nankin. And, every Saturday, I visited a subterranean Hennepin Avenue beauty school where students teased my hair into glamorous (I thought) Marge Simpson-like towers.

When I moved back here a year and a half ago and trolled Hennepin, however, not even nostalgia could make me feel good about this being my home town’s main drag. Between isolated clumps of activity — a small theater district, a college, a library, some restaurants — sat vacant storefronts and parking lots. The street looked sad, worn out and empty.

So when I was invited to take a bus tour of the Ave with some local notables and Charles Landry, a British urbanist and author (“The Art of City Making”), I immediately R.S.V.P.-ed. Landry, who, in the extravagant language of his website, aims “to help cities become more resilient, self-sustaining and to future proof themselves” is one of those Big Think people, and I wanted to know what he would recommend for humble Hennepin.

Landry’s visit is one of a series of Talk-It Hennepin events sponsored by Plan-It Hennepin, a consortium of the Hennepin Theatre Trust, the Walker Art Center, Artspace and the city of Minneapolis. It hopes to recreate the street as a “cultural corridor.” The group has already won a $200,000 Our Town grant from the National Endowment for the Arts, which the city will partially match, to create a plan to convert vacant and underutilized spaces along the avenue to (in their words) “inspire an arts-centered community cultural experience and cross-programming for affected entities while fostering economic vitality.” Whatever that means. Anyway, the over-arching vision is to “string together existing pearls” from the Mississippi River to the Walker sculpture garden (a distance of just under two miles) to create a walkable scene, like Fifth Avenue in New York, maybe, or Las Ramblas in Barcelona. Well, OK, those are big reaches obviously, but a place that could be a regional destination and not just a drive-through.

An ebullient guy in his early 60s, Landry seemed content to listen and learn about Plan-It’s plans as our small bus took off for Nicollet Island, looped around the Nordeast on University Avenue and made stops along Hennepin. “I’m an outsider,” he said. “The disadvantage is that I’m ignorant.”

The advantage, of course, is that an outsider brings fresh perspective. Landry drank in the Park Board’s dream plan to create a green belt on Hennepin from the Public Library on Third Street to the river and had nothing much to say about the Federal Reserve building on First Street, which is impressive but not exactly welcoming. (I’ve passed it a zillion times and still can’t quite figure out how one gets inside.) 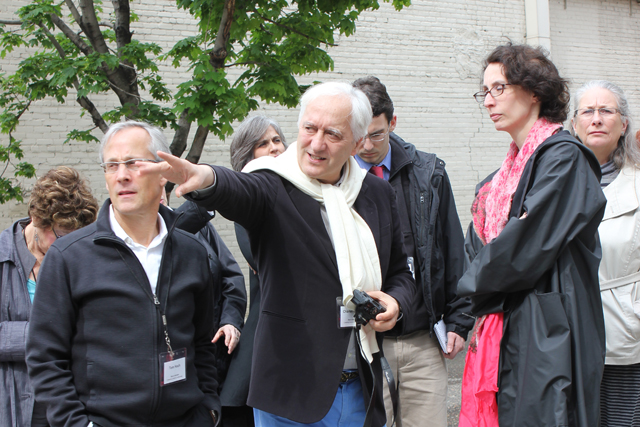 Courtesy of Hennepin Theatre Trust “I’m an outsider,” Landry said. “The disadvantage is that I’m ignorant.”

Hopping on and off the bus to take photos, Landry waxed enthusiastic at the site of the future Whole Foods, “an unbelievable gift from the heavens,” he said later, which could become a drawing point for visitors as well as local residents. The Fifth Street stop of the light rail, a parking lot bordered with looming blank walls on one side (next to the Cowles Center) and a string of bars (Dream Girls and so on) across the street, he proclaimed was a spot ripe for “intervention.” What kind? Not murals, he said.

In a parking lot next to the Pantages Theatre, Landry took in Hennepin’s schizophrenic nature. To the north was a wealth of diverse building types and some density and bustle. It looked like a city. In the other direction lay a bleak patch of parking lots, the point at which pedestrians say to each other, “Nothing here. Let’s turn back.”

But of course, there is stuff beyond: Laurel Village apartments, but with CVS the lone retail tenant; the site of a new Lund’s, Minneapolis Community Technical College, and the Basilica across in front of which sits a batch of now empty buildings. The 394 underpass Landry called a “no” place because presumably no one would want to be or go there (although I recall that a similar spot near the Queensborough Bridge in New York made an excellent stroll for local hookers).

By the time the bus arrived at the Walker, Landry seemed a bit depressed. It was raining, and the museum’s stark, almost landscape-free exterior looked foreboding. The Whitney pedestrian bridge that connects the sculpture garden to Loring isn’t used much, planners admitted, and the Walker was cut off from the rest of Hennepin by the traffic surging.  Downtown Hennepin, Landry declared, is Step One. The Walker is Step Three. “But what’s Step Two?” he asked.

From there, we futzed around Loring Park and wound up at MCTC, where Landry was scheduled to speak at a luncheon for City Council members and officials. He frantically uploaded his photos and made notes while the rest of us uploaded chicken salad and chocolate chip cookies.

‘In its ugliness, it’s beautiful’

Given that quick-and-dirty assemblage of thoughts, his delivery was stream of consciousness. He praised the library whose parking lot surroundings were to become parks, although what people would do in them beyond sit was not clear to me. He showed a slide of the spiral shopping garage on the southeast corner of Hennepin and Fifth. “In its ugliness, it’s beautiful,” he said. Again he pointed out the parking lot next to the Cowles Center as “an opportunity site.”

The buildings along Hennepin in front of the Basilica could be an incubator for people in the arts. Nice idea, but having covered finance for the last hundred years, I wondered who would pay market rates to landlords to have artists incubate.

When Landry showed his slide of the Walker, he lamented, “Softness has been lost” — by which he meant greenery. (Note to Walker: Get rid of those ugly stairs and that weird sidewalk with grass polka dots and plant some tulips.) As for Loring Park, it was “so near and yet so far.”

What lessons did he draw from all this? Well, the old paradigm of planning, which was to plant one monolithic entity — an anchor store or a corporate headquarters — in a development, is over. What cities really need are lots of little things that kind of work together but in a somewhat messy way. He showed us a picture of Galeria Florida, an almost alley-like development in Sao Paulo, Brazil, that sucks people into its 40 cafes, stores and quirky shops.

To make a place lively instead of dead, you have to give people reasons to be there all the time. “It’s very much about food,” Landry said, showing us slides of outdoor cafes. “And markets.”

Mixing uses, residential and business, and mixing price levels of apartments and offices would stimulate hustle and bustle — and perhaps, more important, put eyes on the street, which more than cops, prevent crime and make people feel secure.

Too much of the architecture here says “no” to the outside, he said. And although I thought to myself, “Hmmph, Landry just doesn’t get 26 below zero weather,” I came to agree after visiting Capella tower later that day. I swooped up to the skyway from the parking garage, went to an office and returned to the parking garage. Even though the weather turned sunny, nothing lured me to the street. Most buildings, with their reflective glass, seem opaque to the pedestrian. Even our vaunted skyways work against street life. They keep pedestrians warm but don’t spew them out. If you’re walking across one and you spot a food truck down below whose yummies you’d like to sample, there’s no easy way to get there.

Cities should try things that are temporary, “that prefigure the future,” Landry said. He showed a slide of a “container city” in New York, a batch of, yes, vari-colored industrial containers stacked on top of one another in a parking lot to create cheap office space and studios. If the thing you try doesn’t work, well, you can take it down. “If you have disgusting spaces, try something,” he urged.

By this time, Landry was practically dancing with enthusiasm. “It’s about creating an environment that holds value in every sense,” he said. I was daunted, however. To transform Hennepin, city planners, developers, do-gooders like Plan-It and politicians would have to do two million difficult things and do them correctly. Fat chance, I thought. Just consider the urban planning disasters of yore: urban renewal that brought down landmarks like the Metropolitan Building and the public library on 12th Street. And how about Block E? Even those skyways, which were thought to be so innovative and smart, aren’t working right.

But as I walked down Hennepin, crazy ideas popped into my head. Maybe that Fifth Street parking lot could be filled with Jumbotrons and light shows like those in Times Square. Advertising where tons of people get on and off the light rail would make sense. Maybe the city could invite craftspeople to sell stuff on the Whitney pedestrian bridge; if people could eat or buy a pair of earrings, they would be lured to visit the Walker and its sculpture garden. Maybe that circular parking garage could be lit at night, turning it into a weird sculpture. Maybe those skyways could have stairs or elevators to the street …

Charles Landry, you did your job. You really got us to start thinking.