Like a car caught in a rush-hour traffic jam, the proposal for a new west-metro light rail route will nudge ahead on Tuesday afternoon.

That’s when the Hennepin County Board of Commissioners (meeting as the Regional Rail Authority) votes to approve the LPA, or Locally Preferred Alternative, for the Bottineau Transitway, which would stretch from the baseball stadium in downtown Minneapolis out to the northwest suburbs.

The plan started its journey back in 2008, and nobody knows whether — or when — it will win all the approvals it needs to get to its goal. Think Met Council, state Legislature, and Federal Transportation Administration, each of which have to endorse the project before a worker digs the first shovelful of dirt.

“It’s a ridiculously long process,” says Mike Opat, chair of the Hennepin County Board. “But that’s what you have to go through if you want the feds to come up with almost $1 billion.” True enough. No pro football team is standing by with a checkbook.

Through the years, several routes have been under consideration. After a kind of “scoping out” process, Hennepin County, which is taking the lead in developing the line, considered four alternatives (PDF), says Brent Rusco, Bottineau Transitway Study Manager.

In Minneapolis, the so-called D1 option would meander west of Penn Avenue and then travel alongside the Burlington Northern Santa Fe train track to zip through Golden Valley.

The D2 option would veer into the Northside along Penn and then turn left until it got to North Memorial Hospital in Robbinsdale. At the other end, Option A would take a hard left to Maple Grove, while Option B would instead head north to Brooklyn Park, ending at the Target campus on 97th Avenue.

The Maple Grove versus Brooklyn Center dilemma seems to have solved itself. Maple Grove didn’t really want the LRT, and the Target campus is slated to become a large employment center.

But the D1 and D2 options were more problematic. “Both had benefits, and both had challenges,” says Rusco. “We struggled with the choices.”

Nevertheless, a few weeks ago, a policy advisory committee voted to endorse B in Brooklyn Park and D1 through Golden Valley. So far, almost all the communities involved — Minneapolis, Brooklyn Center, Robbinsdale and Crystal — passed resolutions of support. The one holdout is Golden Valley, whose city council rejected the plan in a 3-2 vote.

In a letter to the county, Golden Valley let loose with a volley of “concerns:” The route would pass through park land; the planned station would sit on Wirth Avenue, destroying a natural setting; there are no park-and-ride facilities; the city would need to hire more police and build more sidewalks, and so on and so forth.

In a classic demonstration of NIMBY-tude, one council member suggested that the train go through North Minneapolis, where it might generate more economic activity.

Golden Valley’s “no” vote doesn’t doom the project. But at a certain point, says Opat, “everybody will have to get comfortable with it.”

In fact, all the parties will have to consent. Otherwise, the Met Council and the federal government will be unlikely to let the project proceed. Opat added, “We’re a little disappointed. I think Golden Valley should have a broader view of the city.”

Maybe so, but when I drove out to the area to take a look, I had my own doubts. I grew up on the Northside, and my friends and I had played alongside that selfsame railroad track. (We obviously weren’t very bright.) I ran my sled into a tree in front of the chalet at Wirth Park, and my dad gave me my scary first driving lessons on curvy Wirth Parkway.

Since those ancient days, the park hasn’t changed much. If anything, it’s lusher and more verdant than I remember. And looking at the intersection of Wirth and Golden Valley Road, which would be the major LRT stop in North Minneapolis (the other is at Olson Memorial Highway and Penn Avenue), I had to wonder how it could possibly become a transportation hub. 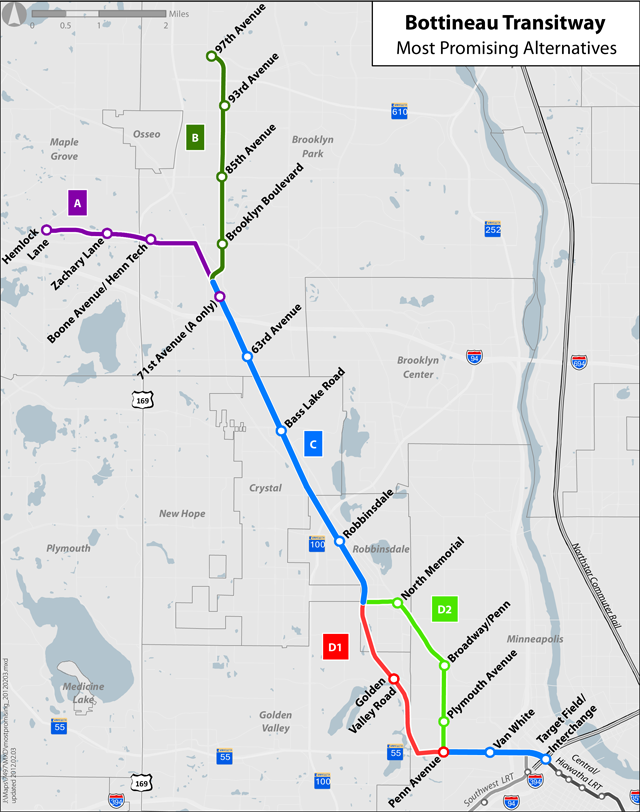 As the Golden Valley City Council complained, there won’t be any park-and-ride areas; the county is expecting people to take buses — and possibly trolley cars — to catch the train for the city. Somebody will have to show me how buses and a train station would not seriously uglify this area.

So what about the North Minneapolis route? It would travel up Penn, with stops at Plymouth and Broadway.

Well, Northsiders were not necessarily any more eager than Golden Valley folks to have a train running up a major street. Raymond Dehn, an architect (and now a candidate for state representative), co-facilitated discussions among residents for the Northside Transportation Network, a grass-roots group. “There wasn’t a consensus,” he says. “Half wanted it on Penn, and half didn’t.”

It’s easy to see why.

First of all, houses all along the west side of Penn would have to be demolished to make way for the train — and for vehicle traffic. Taking people’s homes, no matter how much you pay for them, is pretty drastic. Homeowners on the east side of the street would also face an unappealing future: a view from their front windows of train tracks. Not good.

What’s more, the broad swath of a trainway would slice the neighborhood in two, making one side inaccessible to the other. For a neighborhood wracked by poverty, predatory lending, abandonment and a tornado, such a gaping wound could be devastating.

On the flip side, the train would probably spur some economic development. Three corners of the intersection at Broadway and Penn are pretty derelict; Plymouth and Penn is also bare, except for the offices of the Urban League. Construction of a train station in either place would likely encourage new stores for commuters — dry cleaners, groceries, pharmacies, maybe even a restaurant, all badly needed on the Northside.

I would tell Hennepin County to come up with another route, but that would be a presumptuous suggestion coming from somebody who hasn’t spent four years studying the project up, down and sideways.

It’s really a Hobbesian choice. Usually, when confronted with such a quandary, I ask myself the question that always brings about a quick decision: Which would you choose if you had a gun to your head?

In this case, even staring right down the barrel, I’m not sure what I’d do.