New numbers from 2011 Census estimates show that for the first time in nearly a century many large cities are gaining population faster than the suburbs that surround them. Twenty-seven of the 51 largest cities in the nation beat the growth rates of their suburbs. And the trend is visible in the Minneapolis-St. Paul-Bloomington metro.

The Twin Cities registered -0.2 percent. That doesn’t sound like much but it’s a notable departure from the many long years when most cities, including ours, lost population. And that tiny number places the Twin Cities in 16th place. At the top of the heap is New Orleans, which grew 3.7 percent while its suburbs poked along at only 0.6 percent, a difference of 3.1 points. That’s understandable; Hurricane Katrina depopulated the city; seven years later people are returning.

“It’s a good time in the Twin Cities,” says Myron Orfield, executive director of the Institute on Race & Poverty at the University of Minnesota Law School and co-author of  “Region: Planning the Future of the Twin Cities.” “We are pretty darn stable.”

Pushing the numbers up is an influx of young people who were raised in the suburbs and exurbs but find city life more interesting, says Alan Ehrenhalt, author of  “The Great Inversion and the Future of the American City.” “This is the generation that grew up watching “Seinfeld,” “Friends” and “Sex in the City,” mostly from the comfort of their suburban sofas. I do not claim that a handful of TV shoes has somehow produced a new urbanist generation…But it is striking how pervasive the pro-city sensibility is within this cohort, particularly among its elite.”

The trend, according to Orfield, may be short-lived. A lousy job market, difficulty in getting mortgages, the burden of student debt all combine to keep young people (those under 30) renting city apartments. An improvement in the economy could propel some of them, particularly those with children, into the suburban housing market. After all, even Monica and Chandler eventually moved to Westchester County.

To get a handle on what’s going on with the young folk, I made the 10-minute journey to the Riverview Cafe, a cozy coffee house and wine bar in the Longfellow neighborhood. On previous visits to work on my misbegotten novel, I’d noticed passels of young mothers and fathers sipping coffee while they watched over toddlers lurching around a playroom full of toys. 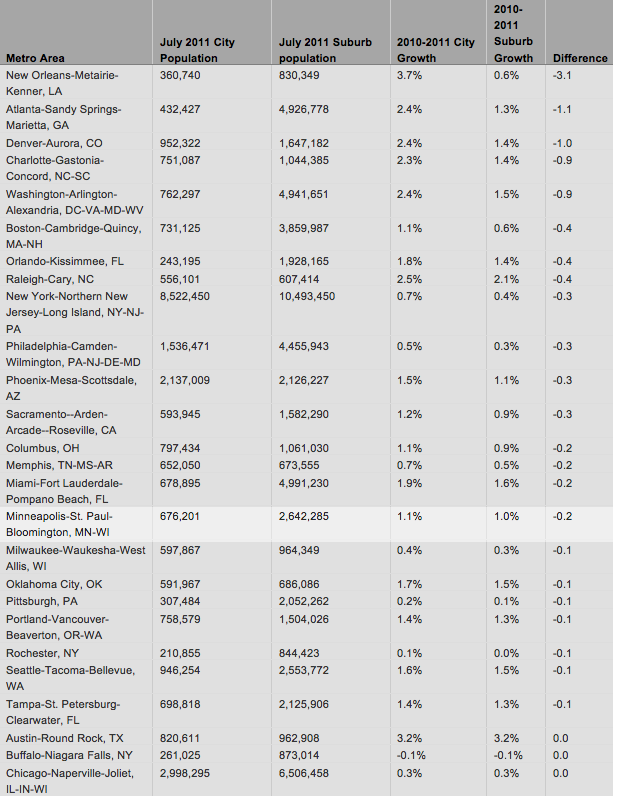 David and Mara Bernick, a 30-something couple, own the place. “David had the foresight to notice young couples moving into the neighborhood,” said Mara, as she supervised her 5-year-old daughter. (They also have a 10-year-old son.) “He saw the need for a place where young families could get together for coffee or a glass of wine.” That was back in 1998 when they bought the property, a former soda fountain in foreclosure.

Are more young couples sticking to the city? “Yes,” said Mara. The reason: “They want a true sense of community.” People get bigger yards and more privacy in the suburbs, but in Longfellow, she pointed out, it’s much more neighborhly. “We really, truly know our neighbors,” she says.

David identified another plus. “Everything is within a mile of our house — schools, parks, playgrounds, movies, drug stores.” Mara chimed in: “When I see people commute such long distances to the suburbs, I wonder, ‘When are they ever at home?'”

Another group fueling the urban revival: affluent seniors. Since I am myself a member of this group, I can tell you that many empty-nesters relish downtown condo living where they can walk to the theaters and restaurants they didn’t have the time or money to patronize when they were working and raising kids. I suspect that the trickle of aging baby boomers into downtown will turn into a torrent once the housing market picks up and they can sell their suburban digs.

The tiny shift in the growth of the city may be a harbinger of good times ahead for the Minneapolis and St. Paul. If the trend continues and expands, the cities will be looking at a stronger tax base and invigorated neighborhoods. That wouldn’t be bad at all.