If you haven’t noticed the proliferation of mobile eateries on city streets in the past couple of years, you’ve probably been on a prolonged journey to the Gamma Quadrant or maybe doing time in a maximum-security lock-up. Food trucks have become almost impossible to miss.

Just walk along downtown streets in either Minneapolis or St. Paul during the lunch hour, and you’ll find trucks dishing out street food with pretensions — duck confit, portobello mushroom sandwiches, mac and cheese and pulled pork — to the huddled masses yearning to eat cheap.

Currently, there are about 40 food trucks in Minneapolis and 60 in St. Paul, up from none a few years ago. More could be on the way, and once-and-future chefs won’t be the only ones launching them. A 2011 survey by the National Restaurant Association found that 36 percent of eateries in the “fast casual” category (think Panera’s or Chipotle Mexican Grill) say that they are likely or somewhat likely to start food trucks of their own; they see the trucks as a good way to expand their businesses and to acquaint customers with their food.

Cities across the nation have viewed the trucks as a boon. They add to tax revenues and liven up the street. When I visited the other day, Marquette, which is normally as empty as the far side of the moon, had an almost festive air with seven trucks parked end-to-end and customers milling around deciding what to eat. Says Lisa Goodman, the 7th Ward Councilwoman who championed food trucks to in Minneapolis: “I’m ecstatic. It’s been so successful.”

Not everybody is thrilled. Kim Gruetzmacher, owner of the 8th Street Grill on Marquette, complains that the city is allowing the competition to sit right on his doorstep and take away customers.

His restaurant is hurting less than eateries in the skyways because it’s open for happy hour and dinner while they do only breakfast and lunch. “One woman told me that her business was down 40 percent, and she had to lay off employees,” says Gruetzmacher.

It’s easy to see why the business has expanded so quickly. For recession-weary office workers, the trucks offer fare that at $5 to $10 a dish is cheaper than what’s available at full-service restaurants and is a cut above fast food or a sandwich brought from home. Truck owners, some of them former executive chefs, have assembled inventive menus featuring veggies from local farms, meats that have been slow-roasted for eons and exotic ingredients like yuzo and tomatillo.  “I go to the fish market every day at 5 to get the best,” says Billy Tserenbat, a former executive sushi chef who launched Sushi Fix forty days ago.

For young chefs, like Kyle Olson, one of several who operate Get Sauced, trucks offer a toehold in an industry that’s been whacked hard in the five-year economic downturn. “We hadn’t the means to open a restaurant,” says Olson. “A truck was more approachable.”

Launching a restaurant, after all, can cost hundreds of thousands, if not millions; in contrast, a food truck can get off the ground for as little as $40,000, according to Richard Myrick, editor-in-chief of Mobile Cuisine Magaine and author of the forthcoming “Running a Food Truck for Dummies.”

To get licenses in Minneapolis or St. Paul, food trucks must comply with National Sanitation Foundation safety and cleanliness standards for commercial kitchens. Truck operators must have food management certification, which they earn in an eight-hour course renewed every two years. And, truck operations must do their food prep (the cutting, slicing, dicing and slow-roasting) in a commissary or professional kitchen. No home cooking allowed.

A St. Paul license costs $244. The city allows trucks to park anywhere. They may stay at meters for the specified limit, usually two hours, and can’t return to the same space for another two hours — although they don’t always comply with that restriction.

In Minneapolis, there are multiple fees: $818 for the annual operating permit, $359 for the city to review the truck’s food offerings and a $64 for an inspection. Until last year, trucks were restricted to Nicollet Mall. Now they can operate anywhere downtown, but they must pledge to stay open for at least 150 days, not easy, given Minnesota weather. Minneapolis has also designated additional food truck areas, some that wouldn’t seem to have enough foot traffic to support a food truck: the Phillips-Corcoran-Longfellow neighborhood along Hiawatha, for example, and the intersection of Penn Ave. North and Golden Valley Road. 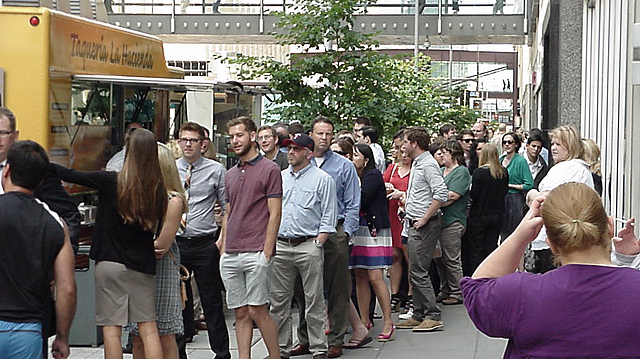 Photo by Wayne DjiubinskiSays Lisa Goodman, the 7th Ward Councilwoman who championed food trucks to in Minneapolis: “I’m ecstatic. It’s been so successful.”

It’s hard to say how much business, if any, food trucks are leaching from so-called bricks-and-mortar restaurants. Myrick says that there has been no study he’s aware of in any city. Clearly, trucks are not competing with fine dining establishments; eating stuff out of a paper tray while perched on a flowerpot in front of an office building is not exactly elegant.

But it’s not clear how much even fast-food rivals lose to the trucks, even in a head-to-head contest.  For example, the Bloomy’s Roast Beef truck, which leases space at Kitchen in the Market at the Midtown Global Market, sits across Marquette from Arby’s, which also specializes in roast beef sandwiches. “Arby’s is still packed,” says Bloomy’s general manager Bridger Merkt.

A peek inside showed that it was. Arby’s district manager did not comment.

What sticks in the craw of competing restaurateurs is that “we’re paying taxes, and they’re not,” says Gruetzmacher. “It’s not a level playing field.”

Disputing that notion is Lisa Carlson, co-owner with Carrie Summer of the Chef Shack, which works several farmers markets as well as Marquette and provides catering for parties. “We do pay taxes. We pay sales taxes and employee taxes. We pay workers comp, and we pay for permits,” she says. They also pay to rent a commissary, “which is not cheap,” she adds, and a portion of that goes for property taxes.

On the other hand, the trucks can’t operate full time. The winter shuts them down, and nobody comes when it rains. Last week, during the record heat wave, says Carlson, “we didn’t work for four days.” And there are amenities that they can’t offer: a place to sit, bathrooms and air-conditioning.

And disamenities abound, according to neighborhood businesses. Wayne Dziubinski, who owns FastSigns on Marquette, says that the trucks arrive on the dot of nine and don’t leave until 2, even though the parking limit is two hours. His own customers have to find parking elsewhere. On some days, he says, 11 trucks are packed end-to-end, creating what he calls “a circus atmosphere.” The crowds are so thick, he adds, that people back up against his plate glass window while eating. He dubbed a picture he took of the scene “Butts on Marquette.”

Gruetzmacher also has a litany of complaints: noise from the trucks’ generators that drowns out customers’ conversations on his patio; smells of tacos and other food pervading the atmosphere (“shouldn’t my customers be entitled to clean air?” he asks), and truck customers taking seats on his patio or trying to use his restrooms. He also asserts that the food trucks are dirty. “They’re not wearing hats, there’s no hand washing, and there’s crap all over the floors.”

I didn’t see that, but I did ask officials from both cities how they enforce food truck regulations. The answer seemed to be that they try to “work with” the trucks to see that they comply. Oren Larson of St. Paul’s Department of Safety and Inspections, says he hasn’t received many complaints. One about a noisy generator he resolved by getting the truck owner to install a quieter one. Lisa Carlson says that her trucks received 12 surprise inspections in the last year.

The City of Minneapolis says that food trucks are given health inspections at least once a year. Infringements in areas such as parking are addressed only if there are complaints.

Gruetzmacher says that he and other storeowners on the street “complain all the time, but nobody listens.”

Councilwoman Goodman says that she has received plenty of complaints, most of them “a concentrated effort by a small group who are upset about losing business to the food trucks.” She says, however, that it’s not the city’s job to pick winners and losers in business. “If people determine that they want to eat lobster rolls instead of a sandwich, well, that’s up to them.”

But by allowing the food trucks to operate, the city has in effect picked winners, says Gruetzmacher. “And we were here first.”

It would be beyond nice if the two groups could somehow work out their problems. Lisa Carlson says that some trucks have started putting up rope lines to keep crowds from interfering with pedestrian traffic. And maybe it would make sense for the cities to restrict the number of food trucks per block. Or to assign them to special areas or allow trucks to bid for a specific space. Then there would be no scramble to arrive on the dot of nine.

“I don’t want to see the food trucks disappear,” says Dziubinski. “Maybe they could just spread out a little.”

Of course, if the economy improves (a lot), the number of trucks might diminish. “The dream for all of us is to open a regular restaurant,” says Carlson. Two trucks — Turkey to Go and Our World Kitchen — have already graduated. Both are launching brick-and-mortar operations.

Dan McElroy, president of Hospitality Minnesota, which includes the state restaurant association, takes the long view. Some members, he says, are concerned that food trucks have an unfair advantage; others don’t care; and some members are food trucks. “I’m hopeful that they can all get together and run a safe and profitable business,” he says.

The City of Minneapolis says that food trucks are given health inspections at least once a year. Infringements in areas such as parking are addressed only if there are complaints.