This spring, while people were ripping their hair out about the Vikings stadium, a more exciting project for downtown Minneapolis was quietly speeding toward realization. And — hold onto your hat — the groundbreaking is set for next Monday.

Called “The Interchange,” the $80 million development, right next to Target Field, will knit together the endpoints of the North Star, Hiawatha and Central Corridor. Professional planners refer to it as a multimodal transportation hub.

To Peter McLaughlin, a Hennepin County commissioner and chairman of the Regional Railroad Authority, I said that it sounded kind of like an open-air version of New York’s Grand Central Terminal, where commuters catch trains, subways, buses and cabs to travel from one far-flung part of the metro to another.

The hub has been in the Metropolitan Council’s regional transportation plan for quite some time. (There’s also one slated for St. Paul at the Union Depot.) But, the Minneapolis project took on a head of steam after the Twins ballpark opened in 2010.

“In the first year, 8,000 fans used public transit each day,” says Ed Hunter, Interchange project manager. That was more than anybody expected and, at game times, the area became a mess. People crisscrossed each other, trying to get to either the North Star or the Hiawatha LRT line. Those who wanted to stay in the neighborhood to eat or to shop had to walk over live train tracks or slither down a narrow sidewalk to get where they were going.

The area was doomed to become an even bigger mess when the Central Corridor line goes into operation in 2014. Twice as many people would be flooding the streets and platforms from the arrival of 500 trains a day and 1,800 buses. Of course, downtown Minneapolis wants more people to commute, visit, hang around and spend money. So says McLaughlin, “It’s a good problem to have.”

Ergo, Hennepin County put the project on a more aggressive schedule and managed to convince the Met Council and the Federal Transportation Administration that building the Interchange earlier, rather than later, made sense.

Since rerouting of the turnaround areas for trains would be necessary, it wouldn’t make sense to dig everything up after the Central Corridor LRT started running. Hunter says he persuaded the county to do what’s called a “design-build.” That’s a method of accelerating a project by having one team in charge of both steps. Already, Knutson Construction, the company also renovating Riverside Plaza, has won the contract.

The Interchange untangles pedestrian paths to trains and buses and allows safe passage over tracks to nearby streets. But, as they say in those infomercials, there’s much more.

The hub will include space for bars and restaurants, a Metro Transit Police station, a bike shop and bike racks. (For commuters’ sake, I suggest adding a dry cleaner, a shoe repair and a hair cut joint.)

There will also be a stretch called “The “Great Lawn,” which could be used for fairs, concerts, exhibits or an ice-skating rink, and “The Cascade,” a huge stairway (think of the Spanish Steps in Rome, only bigger and wider) that would be a meeting place (“Psst, Romeo. I’ll see thee at The Cascade.”); it could also serve as an informal amphitheater.

A similar project in Pioneer Courthouse Square in Portland has been very successful, says Barbara Thoman, executive director at Transit for Livable Communities in St. Paul. “It’s come to be called ‘Portland’s living room,” she says, and it hosts film festivals, musicians, a farmers market and fairs. 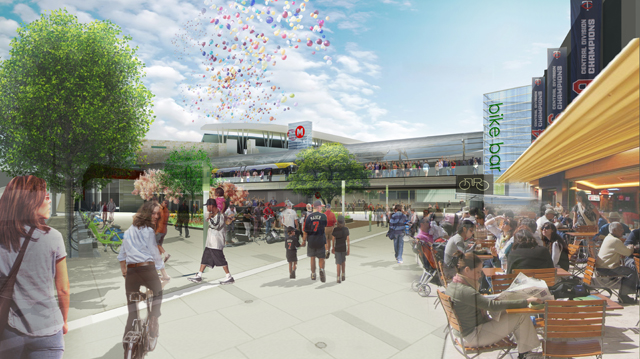 Courtesy Knutson Construction/EE&K a Perkins Eastman companyThe hub will include space for bars and restaurants, a Metro Transit Police station, a bike shop and bike racks.

Of course, whenever any city puts in a new open-air development, the worrier in me starts fretting that it will draw panhandlers, drunks, pickpockets or worse. But if enough people use the space and the transit police patrol it, the Interchange should suffer no more nuisances than any other busy city street.

All the Interchange development will take place on county land.

During the two years of construction, the current turnaround area for trains will be rerouted to wrap around the Hennepin Energy Recovery Center, which burns garbage to create electricity. Nobody using the Interchange will have to look at trucks unloading the yucky stuff because that side of the HERC facility will be at the back where trains are stored. The other side of the building, a blank wall, will face platforms.

“Could you use it for light shows?” I asked Hunter, in hopes that someday I could once more feel like I was in Times Square without actually having to travel there.

The answer is “yes.” Excess energy from the HERC plant will go to heat the sidewalks and the stairways. Using steam to melt snow turns out to be cheaper than shoveling. And maybe visitors will be able to enjoy a cup of joe in an outdoor cafe in January. Pretty exciting.

Another part of the plan that could be thrilling — at least to developer types — is a squaring off of an Indianapolis 500-style curve in the road on the northwest side of the area, making room for a hotel, office building or stores. At least, that’s what Hennepin County hopes will come in. There will also be routes to connect the area to the North Loop.

The county expects some return on its investment from parking fees. (There will be a small 250-vehicle garage under the train platform.) Store rents and licensing fees from whoever wants to sell stuff on the Great Lawn, for example, hot dogs or ice cream, could supply another revenue stream.

And, of course, there are the naming rights.

Please, I beg of you, Hennepin County: Don’t call it Target Plaza. We’ve been there and done that — a lot.

Get ready for The Interchange, Minneapolis’ Grand Central Station – and then some