Is downtown Minneapolis going down the drain?

Apparently not, according to foreign investors. They are upping their outlays in commercial real estate — office buildings, industrial sites and shopping centers — in the Minneapolis area. So says Jones Lang LaSalle Capital Markets Research, a global property management company.

That may come as a bit of a surprise, considering that the IDS Center, Capella Tower and some other iconic, downtown buildings have recently gone on the block. A batch of such up-for-sale announcements occurring all at once might make you feel as though everybody’s running away.

Maybe some of those owners are abandoning ship, but others are climbing aboard.

In the second quarter of 2012, the Twin Cities reeled in $384 million in cross-border commercial real estate investments. That amount put it in the top 10 of the nation’s cities, No. 8 to be exact, sliding in ahead of Boston and Phoenix, both of which are larger. (Just in case you were wondering, London is — and remains — the most sought-after location for real estate investment dollars.) Here’s how the U.S. numbers shake out: 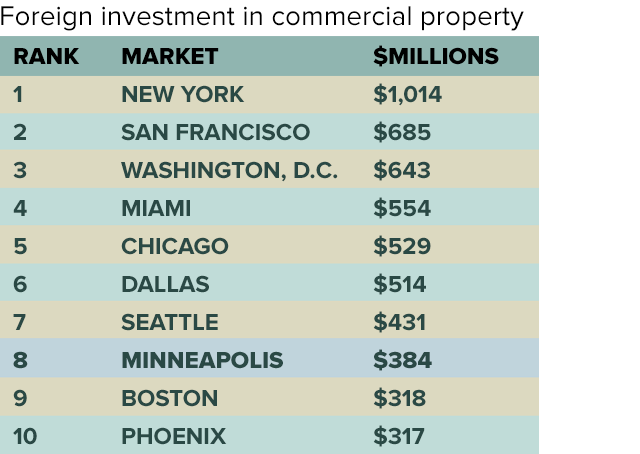 According to Josh Gelormini, vice president of Jones Lang’s Americas Research Group, some $180 million went into retail, $153 million into office buildings and $51 million into industrial properties.

Before anybody comes down with a heavy case of xenophobia, you should know that “cross-border investment” does not necessarily mean that Kim Jong-un of North Korea bought Nicollet Mall or that the notorious Joseph Kony now owns a parking lot around the corner from your office.

Foreign investment, says Gelormini, means that the money is “globally sourced.” Usually, it is a pool of funds, mostly from overseas, collected by a financial institution — a pension fund, a private equity company, a bank or an insurer — that is invested in a portfolio of properties.

A mover in the Twin Cities market recently has been IndCor, an affiliate of Blackstone Real Estate Advisors, which is in turn part of the Blackstone Group, a gigantic New York-based private equity group à la Bain Capital, with offices in Asia and Europe.

Ownership by such abstract entities may seem somewhat unsettling, but when office and industrial buildings cost hundreds of millions of dollars, you can’t expect even Warren Buffett to go all in on one.

Foreign money has come into to the U.S. real estate market as part of what Gelormini calls “a safe haven strategy.”  Investors abroad are desperate to avoid volatile global economic conditions both in Europe and in developing nations. And for those who are looking for a better return than what U.S. Treasuries are paying (the yield on a five-year bond is currently 0.65 percent), real estate makes a decent option.

It’s no surprise about most of the cities on the list. They either have what Gelomini refers to as “24/7 downtowns” or they’re located on one coast or another. Minneapolis falls into neither category, of course. But, putting money into a healthy second-tier city (sorry, but that’s what we are) is part of an effort by investors to diversify away from the obvious choices, such as New York and San Francisco.

And the Twin Cities’ 5.8 percent unemployment rate, which contrasts nicely with the national rate of 8.3 percent, betokens economic strength, which usually translates into rising rents and plumper profits for said investors.

Fortifying that perception is the presence of an educated population. Nearly 44 percent of adults in Hennepin County and 39 percent of those in Ramsey County have a bachelor’s degree, compared with a national percentage of 28 percent. An educated work force, reason investors, will attract new companies. The presence of a large number of research institutions in the area is also thought to invigorate the local economy. Economy solid, rents solid.

Those factors are drawing money from domestic investors as well, says Mark Kolsrud, senior managing director/investment sales for the Twin Cities office of Cassidy Turley, a leading commercial real estate services provider. “There’s been a dramatic increase in interest in the city by all institutional investors. In fact, the market is as strong as it’s ever been” — and, he adds, reaching the heights achieved in 2006 and 2007, before the financial crash.

The incoming funds are going mostly into properties in the central business district, particularly, he says, into “the higher-level product,” in other words, top floors in prestigious downtown buildings — which again are viewed as sure bets. While the vacancy rate in Twin Cities commercial properties is running 16.7 percent (a bit higher in the suburbs), compared with 17.3 percent for the nation, the vacancy rate in the higher floors of downtown office buildings is currently under 10 percent.

Kolsrud dismisses nagging worries about those big buildings downtown going up for sale. Because they are usually part of a gigantic real estate portfolio, its manager may have reasons to sell that have little to do with the city or the viability of its downtown. The portfolio may have owned the property long enough to garner tax benefits like depreciation or may need to raise cash to pay dividends to investors, he says.

An inflow of money from overseas investors seeking a safe haven is a vote of confidence that should make us feel optimistic. But it doesn’t relieve us of the responsibility of continuing to improve the city — making it better looking, more navigable, livelier and more hospitable to job providers. After all, we want to be a place that investors flock to, not flee from.