Recently, California Home and Design magazine listed the Mall of America as one of “25 Buildings to Demolish Right Now.” I  was crushed. While the MOA doesn’t set my heart aflutter — after all, it’s no Sagrada Familia — it is one of our most famous landmarks. And, I’ve got news for those snooty West Coast architects: It’s hardly the most hideous building in the Twin Cities.

My vote for that honor goes to the Kmart/Sullivan’s SuperValu complex on Lake Street — where it used to cross Nicollet.

It’s not just me, folks. Whenever I ask, “What’s the worst thing planners, developers, and/or politicians have inflicted upon the Twin Cities landscape?” people automatically pop out with “the Kmart on Lake Street.”

This is not a criticism of either store or the goods they sell. The problem is that the place is plain old ugly — the architectural equivalent of Joan Rivers before plastic surgery. If you’re not familiar with the site, it’s basically two immense shoeboxes surrounded by a vast wasteland of parking lot, which is usually under-occupied. Nary a tree nor a flower nor even a colorful waste bin interrupts the dreary vista.

Worse yet, the stores straddle Nicollet Avenue, leaving the neighborhood to the north cut off from Lake, the major commercial artery and transit corridor. Should a resident want to shop at Kmart or SuperValu or any of the other businesses on Lake, he or she has to shlep around the two big stores to get there.

Before you gnash your teeth in irritation (as I do, every time I drive by), you should know that Minneapolis is now looking to fix what was wrought some 34 years ago. Back in January, Robert Lilligren, councilman from the 6th ward, paved the way for the establishment of a working group that would look at reopening Nicollet.

“It’s been my No. 1 priority for years,” Lilligren says. In his view, development is converging on the area — from the west and the east. The city has the funds to start planning a streetcar line that will extend up Nicollet to the northern city line, and there is a new rapid transit bus station planned near 35W, not to mention a possible streetcar along the Greenway. Obviously, a big fat parking lot with two suburban style buildings sitting in the midst of it all would not be the highest and best use of land criss-crossed daily by thousands of people, all potential customers.

Already, says David Frank, whose job it is to stimulate development around transit systems, the committee has adopted a boundary and established milestones. If all goes well, we could see development kick off next summer.

How did this travesty occur in the first place? Erica Christ, board chair of the Whittier Alliance, the neighborhood association for the area to the north, recollects that back in the early ‘70s, city powers-that-be considered the district blighted. “The area was shabby; it was full of small businesses that were not kept up,” she says. Instead of trying to get merchants to make some modest improvements, the city did what cities did back then — it urban renewed. Bulldozers came in and razed a batch of buildings.

The plan was to have Dayton’s move in and create an urban version of Southdale. Some of the existing buildings would remain, and a glass roof would cover walkways between them. In addition to stores, the complex was to include a bowling alley, a movie theater and parking garages. But in the stagnant mid-70s economy, Dayton’s backed out, and the land sat fallow for six years. (Hopefully, from that experience urban renewers learned a lesson: don’t knock down buildings until you absolutely, positively have something else to replace them with.) 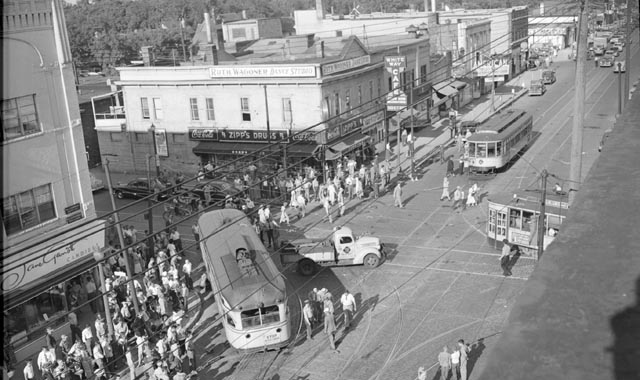 Courtesy of the Minnesota Historical SocietyA derailed street car in the intersection of Lake Street and Nicollet Avenue, August 10, 1951.

The intersection meanwhile had been declared a Tax Increment Financed districts. A TIF arrangement allows the city to borrow to finance development and then repay with the increase in property taxes that new development generates. But, of course, with the land empty, there was no tax increment, so the city was forced to use money from its general fund to make interest payments on the bonds. Finally, in 1978, Kmart agreed to come in. But its business model mandated a giant, one-size-fits-all store with an immense parking lot. Over bitter neighborhood opposition, the City Council, hungry for tax revenues, voted 7 to 6 to close Nicollet to allow construction of a suburban-style big box. Those who voted “yes,” says Christ, “have gone down as the turkeys who built Kmart.”

Afterward, the neighborhood spiraled downward, she says, albeit with one saving grace: “Land values dropped so much that a lot of restaurants came in.” The result was the restyling of Nicollet as Eat Street.

Unmaking what’s been done won’t be easy. Chief among the obstacles, says David Frank, is “figuring out the real estate.” Right now, there are four elements: Kmart’s land and its lease, the former owned by a New York entity and the latter by Sears, and Sullivan’s SuperValu’s land and lease. The value of the property alone, as listed on city tax rolls, is about $9.1 million.

If they refuse to budge, the city would pretty much be stuck. And to proceed, Frank says, that redevelopment would likely require both parcels because the two pieces of land now are encumbered with various easements, for example, to allow parking by SuperValu customers in Kmart’s lot and so on. The city, of course, could undertake piecemeal development, securing one of the properties and reopening Nicollet, but the result wouldn’t be pretty.

Of course, what’s there now isn’t pretty either.

Sherman Associates, which was granted exclusive rights to develop a project on the site back in the 1990s, is now conducting private negotiations with owners for the property. The company has until the end of the year to conclude the deal. If owners refuse to budge, the city, says Lilligren, “has other options.”

“Eminent domain?” I asked. “I don’t want to use those words,” he says, “but no options are off the table.”

What kind of development would rise at the intersection?

David Frank envisions a commercial area that could incorporate a reconfigured Kmart and SuperValu, but he wants denser development that would front on the sidewalks and give priority to pedestrians rather than cars. Lilligren would like to see some housing built along the Greenway.

Erica Christ of the Whittier Alliance says that she doesn’t want “one big gigantic development.” That could stick the neighborhood with a white elephant like downtown’s Block E, she fears. She’s not in favor of rental housing either. “We really have enough apartments in the area.” In her fantasies, she says, the city would try to lure light industry, maybe a brewery, like Surly. “That would produce jobs, jobs that could support a family,” she says, which perhaps is what people who live in the neighborhood need more than anything else.

She’ll get her say at some point around Aug. 15 when the “Reopen Nicollet Working Group” has scheduled to begin talking to the community.

Something’s coming — something good (we hope) — on Lake Street