Every time I drove by Cancer Survivors Park in downtown Minneapolis, I shuddered a bit.

Don’t get me wrong. Anybody who battles such a relentless disease, survivor or not, deserves a monument. But, for some reason, I imagined it looking something like Lourdes or maybe the Mayo Clinic decades ago with patients languishing on gurneys or in wheelchairs moaning for help. I don’t like having my heart broken; so I didn’t want to visit.

As it turns out, the park is a lovely 1.5 acre expanse of lawn that terraces down to the sidewalk from Marquette Plaza, the old Federal Reserve building, the one suspended on a cable.

But the park has a problem. Nobody much uses it. I thought that maybe the name was off-putting. But Max Musicant, a Minneapolis native and 29-year-old graduate of the Yale School of Management who runs an eponymous consultancy that does placemaking (more about what that is later), had a different take. “There was nothing to do there,” he says. And he set out to change that.

Cancer Survivors Park is an odd duck, as parks go. Privately owned but open to the public, it’s one of 24 placed in cities across the nation by Richard and Annette Bloch. He was the “R” of H&R Block, the tax preparation service, and a survivor of both lung and colon cancer. (He died of heart failure in 2004.) Though each park is individually designed to fit in its surroundings, all have three commonalities: a “positive mental attitude walk” with bronze plaques urging patients, for example, to “Realize cancer is a life-threatening disease but some beat it. Make up your mind that you will be one of those who do”; a bronze sculpture showing life-size figures passing through a maze representing cancer treatment; and a “road to recovery,” with more advice-giving plaques.

But in its emptiness the park is similar many downtown spaces in the Twin Cities and all over the nation. People cross them to get where they’re going but rarely linger.

In the context of cities, lingering is an unalloyed good. I know this is a backward analogy, but think about a website, which is a sort of public space. If you own one, you not only want tons of people to visit, but you want them to stay. The longer they stick around, the more likely it is they’ll consume what you’ve got, whether it’s content or products. And if they like your stuff, they’ll probably return and use website again.

Those who have given serious thought to street life — chiefly Jane Jacobs, author of “The Death and Life of Great American Cities” and William H. Whyte who wrote “The Social Life of Urban Spaces” — came to understand that lively places full of people produce safer streets (only the dumbest criminals mug people when there are witnesses), more commerce, more socializing, greater enjoyment and stronger communities.

Just think about the plaza by Lake Calhoun in front of the Tin Fish. It has food, a lake view, plenty of people with bizarre tattoos and piercings to watch, and opportunities to walk, run and bike. Most people would much rather be there than standing on a patch of cement in front of U.S. Bank Plaza downtown.

Figuring out how to draw people to public spaces — plazas, parks and streets — is the purpose of placemaking, now one of the hottest trends in city planning. It has spawned a cottage industry of experts like Fred Kent, president of the Project for Public Spaces, a nonprofit. He zips around the world advising cities and towns on how to make places more vibrant. His prescription boiled down and over-simplified: provide lots of things for people to do and ways to connect to other places — on foot.

Foundations have recognized placemaking too. This summer, ArtPlace, a coalition of funders and federal agencies led by the National Endowment for the Arts, awarded $1.3 million to four groups in the Twin Cities — the Native American Community Development Institute, Intermedia Arts, Pillsbury House + Theatre, and Public Art Saint Paul — to engage in “creative placemaking.” What means that? Well, Pillsbury House plans to develop a “creative arts corridor” on Chicago Avenue from 34th to 43rd.

Recognizing that Cancer Survivors Park was bereft of people, Musicant approached FRM Associates, the owner of Marquette Plaza. “You have a wonderfully cared for lawn,” he told them. “But no one is using it.”  Having more people in the park, he contended, would increase the satisfaction of building tenants. FRM awarded him with a contract and a small budget.

What he did was not rocket science. For starters, he saw that people needed a place to sit. “There’s almost no place in downtown Minneapolis where you can sit for free,” says Musicant. So he purchased six tables and 24 chairs. They’re superior to the fixed concrete benches that are sometimes placed in and around plazas, because they can be shifted into the shade or the sunshine, depending on the weather and the time of day. He added bocce ball sets and a ping-pong table that office workers could use during breaks. And he rented a piano and supplied sheet music so that any passer-by could play. (Building management moved it inside each night and during bad weather.)

He partnered with other organizations to bring activities to the park. Lifetime Fitness gave an outdoor spinning class, there were Zumba dance classes, tai chi classes and sessions with Gorilla Yoga. Skip to My Loop, a North Minneapolis nonprofit, provided music for kids, and the Hennepin County Library conducted readings. 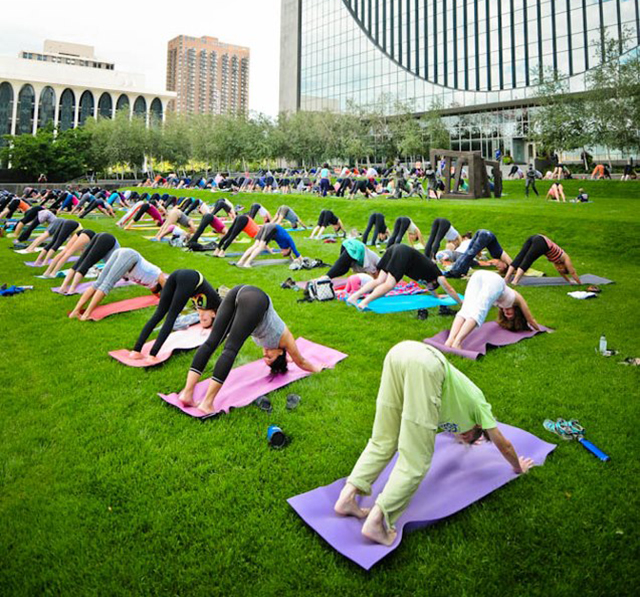 When I visited the other day, four guys who work upstairs at The Scoular Company, a commodities trading firm, were playing bocce on the lawn. They were in the fourth game of a series and wouldn’t take time from their game to speak except to say, “Tell ’em that Schaffer and Harding are ahead.”

Musicant thought that having one or two food trucks nearby would draw more people. But he was never able to bring them on board. The street in front of the park is one way the wrong way; the trucks generally have to serve from the passenger side. And the sidewalk, while wide enough, was devoted partly to a garden. He’s hopeful that maybe next summer he can get some sort of food or beverage service going on the lawn.

The task of making the park more user-friendly is not yet complete, Musicant admits. The space has a lot of built-in disadvantages. “The sight-lines are horrible,” he says. Trees in front that buffer the park from noise also mask its existence; so even if something is going on, people on the street don’t necessarily see it.

A bigger problem to my mind is that the park is a bit isolated. Except for those who work in Marquette Plaza, there’s no particular reason for people to walk by or visit. The park doesn’t connect to anything else. Maybe when the Whole Foods store is complete a couple of blocks away, some stores will open up in between and pathways to and from the park will start to form.

Still, on a typical day, says Musicant, 25 to 30 people are populating the park at any one time, instead of two or three. And a survey of Marquette Plaza’s tenants found that 65 percent were more satisfied with the space.

Says Musicant: “We’re in phase one of a long-term experiment, but if placemaking can work here, it can work anywhere.”

We can only hope that other buildings downtown with empty, unpopulated plazas give placemaking a try.

Cancer Survivors Park: Making a space into a place