Congestion, run-down bridges and worn out highways are only a few of the problems facing the nation’s cities. But the word “transportation” hasn’t come up either in the presidential debates or in candidates’ stump speeches. Republican Mitt Romney, even in his long-form 59-point plan, never mentions the nation’s disintegrating infrastructure. The president’s 2013 budget proposed $476 billion in projects over the next six years, financed by a wind-down of the wars in Iraq and Afghanistan. But the American Society of Civil Engineers estimates that it will take four times that amount—some $2.2 trillion— to bring our infrastructure up to grade.

To find out what kind of transportation program we might expect from two different administrations—and what the country needs—I queried James Oberstar, former DFL congressman from Minnesota’s 8th district who served as chair of the House Transportation and Infrastructure Committee. During his 36 years in Congress, said one of his colleagues, “he displayed an unrivaled in-depth understanding of transportation. He ensured the passage of important airline, highway, and rail safety legislation. He was vital to the adoption of intermodalism, the seamless integration of air, sea, rail, and road transportation that Americans take for granted. And he has fought for a transformative surface transportation bill that will usher in the next generation of American infrastructure.”

[Who is elected] is a matter of great concern to those in the transportation arena— the contractors, the builders, the building trades unions, groups like the Design Build Institute of America, the National Association of Supply Chain Managers and so on. One major national organization, in December of last year, went to Romney’s Boston headquarters to make a presentation to his campaign manager and top policy adviser. They brought a Power Point presentation, and they thought they’d have an hour. At 25 minutes, it was “thank you for coming, very interesting,” end of discussion, not a question asked. So the result is serious disappointment in the Romney policy approach and great discouragement about the future of transportation, should there be a Romney presidency.

They [the group] didn’t have to make the same kind of presentation to the Obama team because there are statements and proposals from the Department of Transportation on the record. The disappointment with the Obama side is the lack of pathway to the future financing of surface transportation. The Obama campaign and presidency have advocated [creation of] an infrastructure bank—a source of revenue from which you borrow and repay. But the details have not been laid out.

[The House failed to include it in its most recent transportation bill last year.]

Needed: A hike in the gas tax

Neither side, Democratic or Republican, wants to stick their necks out and support an increase in the user fee—the gas tax, which goes into the Highway Trust Fund. It has been the historic foundation for our remarkable transportation system. Since 1956, it has assured a dedicated revenue stream whose funds are used only for transportation.

Over the years I’ve met with ministers of transportation, with parliamentary leaders and contractors from other countries. They marvel at our transportation system, and they ask, “How did you do this?” and I tell them about the Highway Trust Fund. “Oh, we don’t have anything like that,” they say. “We have to pay out of general revenues, and they vary from year to year.” With the trust fund, you know at the beginning of this project—it’s gonna take two years—the money will be there when you’re done. That’s the genius of our Highway Trust Fund. 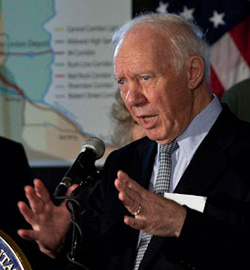 [The last increase] in 1993 was 4.3 cents per gallon to 18.4 cents, which is where the tax is right now. In the past, the tax covered increased outlays. Now, however, we’ve had a decade of inflationary pressure on construction. Demand from China and India is driving up the cost of steel, aggregate and cement; the value of the construction dollar has eroded by 47 percent. On top of that, we have cars that are becoming more fuel-efficient, an increase of about one percent a year. That means about one percent less revenue going into the trust fund each year.

In 2009, I crafted a bill based on the National Transportation Policy Revenue Study Commission recommendations. It allocated $450 billion over six years, including funds for high-speed inter-city passenger rail and an infrastructure bank, among other things. The bill contemplated a five-cent increase in the gas tax. But on the eve of reporting the markup, the Secretary of Transportation [Ray LaHood] was dispatched up to the Hill, to my office to tell me, “There isn’t anything we disagree with. But we can’t support the gas tax increase because the president said that he wouldn’t increase taxes, and this is a tax increase.” And I said, “This is not a general tax increase, this is a user fee, it’s a dedicated revenue stream, it’s always been treated as such.” [He said,] “That’s our view.” Then he went to [ranking member] John Mica and told him the same story. Mica called and said, “This is awful. How can they undermine this after we worked together on this package, Democratic, Republican cooperation?” Well, that’s what their policy was.

[Congress passed MAP-21 this year, about three years after the previous law expired; a stopgap, it extended the level of funding in previous legislation, but only for 27 months. It did not increase the gas tax.]

We are at a crossroads for transportation in America, and the outcome of this election is going to determine whether we move ahead or whether we just tread water for a few years—which means falling behind.

The European Economic Community has a 20-year $1.3 trillion investment plan that includes 30 major projects. They already have a waterway connecting the North Sea to the Black Sea. They’re constructing a truck route and a freight rail route through the heart of Europe and extending their high-speed passenger networks.

China in 1986 had 168 miles of interstate quality freeway. Today they have 25,000 lane miles of freeway, and in 10 years, they’ll have 52,000. [The U.S. Interstate system has 47,000 miles.] They have shortened logistics—or truck delivery time—between Shanghai and Beijing from 31 hours to 14 hours. That’s an enormous reduction in the cost of delivered goods. Our cost of logistics is going up. In 1978, it was 17 percent of GDP; by 2000, it had dropped to 7 percent. Now it’s gone up to 9 percent. We’re going in the wrong direction because we’re not making the investments required to reduce congestion and to improve the mobility of goods and people.

And this is not tax the rich. This is hard-core structural investment in the future of America.

We have to reach a national consensus on investing in our future to create the basis for economic growth. Adam Smith said 200 years ago if the public sector does its job well, the private sector will thrive. The role of the government is to provide the water and the sewer and the waterways the canals, the basis for the railroads, and the roadways and the bridges.

Priorities? While 50 percent of vehicle miles traveled are in our urban centers, only 15 percent of our highways are there. So you have to reduce congestion by making the necessary investments in transit, which would include fixed guideway systems, street cars, light rail, commuter rail, circulators and buses. And you need rural-to-urban truck route investments to improve the movement of freight to market. You can order all you want from Amazon.com, but you need a truck to bring it to you.

Also, we have 153,000 bridges that are structurally deficient or functionally obsolete. About 78,000 need to be rebuilt. They carry 60 percent of the goods of the whole country. The Woodrow Wilson Bridge linking Maryland, Virginia and the District of Columbia—that bridge carries 1 percent of the GDP of the U.S. The Roebling Bridge connecting Cincinnati and Kentucky carries 3 percent of our GDP. To reconstruct it will cost $3.5 billion. These are massive structures that need to be rebuilt—to reduce congestion and to lower the cost of moving people and goods, We have to make those investments if we expect to be competitive in the world marketplace. That is going to challenge the next president—whoever it is. Obama or Romney.