Former New York Mayor Ed Koch (whose name rhymes with “notch,” in case you wondered) would famously gad about town asking his constituents, “How am I doing?” He was re-elected twice and served 12 years, so usually the answer was a thumbs up.

These days, seeking feedback is deemed an unadulterated positive. The goody-two-shoes notion is that we can’t improve unless we understand our strengths and hear about our shortcomings. The process is not exactly pleasant, however. Human nature is such that even if the report is 99.9 percent favorable, the mind obsesses about the 0.1 percent that isn’t — and usually dismisses it as completely unfair.

As a city, maybe we can take such feedback a little less personally — although I admit I was very upset when I read that Travel and Leisure ranked the Twin Cities 11th worst dressed in the nation, and Forbes rated us a mere 6th for worst winter weather behind Cleveland, Boston, New York, Milwaukee and Chicago. (We were robbed!) So I thought it would be worthwhile to call readers’ attention to two studies of recent vintage that show how we’re doing in two crucial areas: cost of living and economic growth.

The first study called “Losing Ground” comes from the Center for Housing Policy and the Center for Neighborhood Technology. It compares the costs of housing and transportation to income in the 25 largest U.S. metropolitan areas. The overall findings: the combined costs of housing and transportation rose on average 44 percent from 2000 to 2010. That’s about 1.75 times the 25 percent growth in median income. Ergo, families are struggling to keep up.

Here are the stats for the Twin Cities. Housing on average rose 42 percent and transportation 21 percent, the total 2.04 times the growth in income. That makes us 7th among ground losers. The absolute worst is Detroit, where costs rose 4.5 times higher than income; Seattle fared best, its residents’ incomes pretty much keeping pace with expenses.

Before we go into a fetal position, wondering how we could be doing so poorly, you should know that these figures have a negative bias because the study in its assessment of average housing expenses did not include homeowners without mortgages. By doing that, I guess, the two organizations were able to justify their headline that “Housing and Transportation Costs Outpaced Income.”

“Losing Ground” then looked at how families of moderate means are doing. Those are people earning between 50 and 100 percent of the local area’s median income — in the Twin Cities, from $33,000 to $66,000. In this case the study did include homeowners with paid-off mortgages — and, suddenly, the Twin Cities, where, I imagine lots of frugal folks have paid off their mortgages, look much better. As you can see from the chart below, our housing and transportation expenses came to 54 percent of income or fourth best. 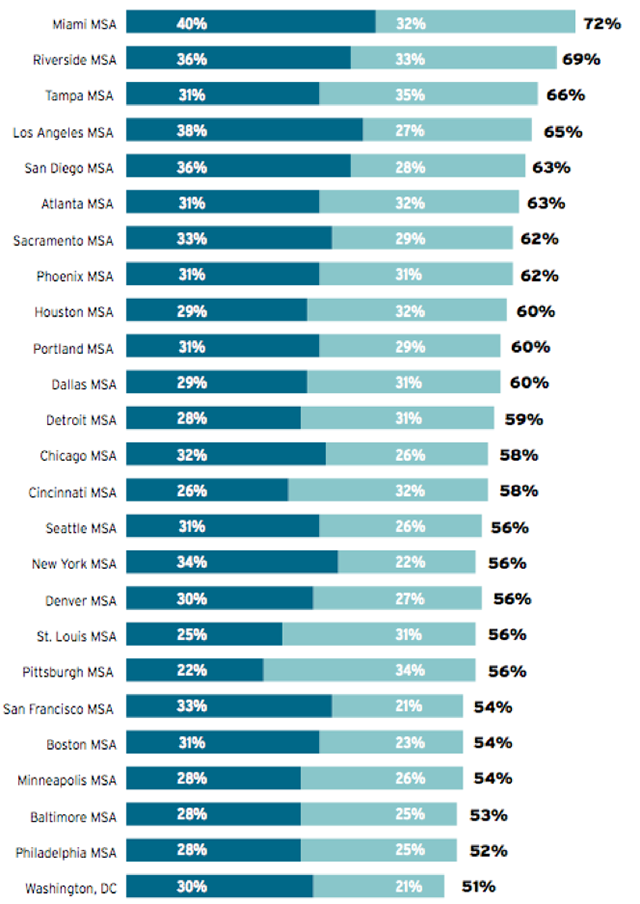 Source: Center for Housing Policy and the Center for Neighborhood TechnologyHousing and transportation costs as a share of income for families earning between 50 percent and 100 percent of the median income in their city.

However, the study did point out that our town has higher-than-average transportation expenses. Even so, moderate-income renters in the Twin Cities were second least burdened of all 25 metros, spending 49 percent of their incomes on housing and transportation. Moderate-income homeowners were fourth least burdened, spending 57 percent. Miami was the worst in both categories. In fact, all the most cost-burdened cities were in California or the South.

Still, as feedback proponents would say, there’s room for improvement. Spending over half of family income on housing and transportation doesn’t leave much over for education, savings, health care or even food. To keep housing and transportation costs low for moderate income families, the report suggests preserving and creating affordable housing options in “location-efficient areas.” That recommendation has particular salience for the Twin Cities, where the billions of dollars we are investing in mass transit may boost in-town property prices, putting housing out of the reach of the families who most need it. I would add: create and preserve affordable housing where the jobs are growing; then we’ll need fewer huge outlays for public transit.

Moving right along, the second how-we’re-doing assessment comes from the Brookings Institution, which just put out the third of its annual Global MetroMonitor rankings. It reports the economic performance of the 300 largest cities in the world. (The think-tank has helpfully provided an interactive map where you can play endlessly with the results.) Prepare yourself: the news is depressing.

For starters, only three of the 76 U.S. metros in the study are recovering from the recession — Dallas, Knoxville and Pittsburgh. Believe it or not, that’s an improvement over last year when not a single city in the United States showed improvement.

Worse, 20 cities seem to be sinking back into recession, among them ours.

In the last year, our economic performance ranked 209th. Back in the day, from 1993 to 2007, Brookings estimates that we ranked 170th. Although employment increased by 1.2 percent in the last year, our per capita GDP dropped one-half percent. According to Brookings, that lagged the nation’s performance. Employment in the United States grew by 1.4 percent and per capita GDP increased by 1.8 percent. (No. 1, by the way, is Macau, the gambling mecca off the coast of China, and ranking 300 is, as you probably guessed, poor Athens.)

How could the Twin Cities fare so poorly, you ask, when there seems to be a spurt in new building and our housing market is in revival mode? Neither of those economic elements has sprung back to the boom levels experienced in, say, 2005.

What’s more, the MetroMonitor focuses on growth. Some of the cities experiencing the most growth started on a base of almost nothing, which may explain why so many Chinese cities you never heard of rank far above us. Example: 39th-ranked Xuzhou, once known as Suchow, which startlingly, has a population of 9.8 million. Its growth in GDP per capita was a huge 5.9 percent in the last year. But GDP per capita is only about $9,400. The Twin Cities’ is $57,300.

And, of course, Brookings is not looking at the most up-to-the-minute data. As they say, wait ’til next year.