There’s much more to do — wiring, lighting and signaling for starters — but heavy construction for LRT on University Avenue is over. Cars are once again moving down the street, and drivers no longer have to take circuitous paths to find a restaurant or shop. But for small businesses on University, surviving hasn’t been easy. According to Metropolitan Council reports, since construction began in May 2011 through October of this year, 70 businesses closed. (Incredibly,, another 86 opened.) One that endured — but barely — is Sunday’s Best Boutique at Frogtown Center on University and Dale, owned by Phyllis Gilliam. Her story: 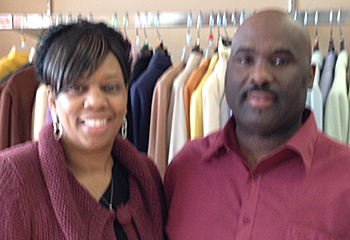 We started as a consignment store in 2001 with my own clothing. I’ve got nine children. We were church people; so we dressed really nice. We put everything in the cleaners and opened up the store. Later we went into retail at 459 University. My uncle told me about the development at Frogtown Center, and he said, “You should go up there and put in an application. That would be a good location for you.”

So I talked to the Neighborhood Development Center. [NDC is a nonprofit that finances and supports resident-owned small businesses in inner city neighborhoods. It sponsored Frogtown Center, a mixed-use development of senior apartments and retail businesses.] They were full. It wasn’t even built yet! I prayed and prayed, and I said, “Lord, you told me that I could have what I wanted,” and a month or two later they called me. The pharmacy that was going into this space changed their minds.

We came here in 2011. It’s gone on two years in May. When we first opened, people were running in here, people would come through the front and the back — people walking past, from the bus. Once people knew we had parking, we got more customers. We got a lot of customers from the other businesses that are here too — Grooming House, that’s the barbershop right next door, and then the phone company and Subway. The store would be crowded.

When construction began on the Midway, we started to feel the effect but we didn’t really feel it until it got here. Then the brook went dry. A lot of people got in traffic and said they just didn’t have the patience. We need to pray for patience, more patience, especially if we want our community to have small businesss and not have to go way out to Mall of America or to Roseville. People got to support these local businesses. You don’t want to drive down the avenue and see all the buildings closed.

Business dropped by about 40 percent. I cried many nights. I’d say “Lord, I know you didn’t bring me this far to leave me!” I prayed for people to come in. I tried to think of new ways to bring people in. We sent out cards, letters, put fliers on cars, sent letters to the pastors, to let them know that we are here and we would love it if they tell their congregation if they are looking for anything for church that they should come and patronize us. We kept going with repeat customers. They would come in and say, “The Lord told me to come over here and buy a dress” or “The Lord told me to come and buy a suit. I came to support you.”

And bless the Neighborhood Development Center. They know and understand what you’re going through. They are caring people.   They forgave six months of back rent. They helped us with advertising. And the City of St. Paul gave businesses grants to keep them afloat. A lot of people have helped.

In the last month things have picked up, after they opened the street. But I’m not at the point yet where we could get salaries. It’s coming. We’ve got a lot of debts, a lot of bills.

I think though that there is what they call a light at the end of the tunnel. The station is right out in front; that should help a lot, I’m excited about the stop being there on Dale. Once everything is up and running, this is going to be a popular area.

This is going be another Grand Avenue. You go down Grand, and the people there, they don’t even drive, they just walk. It’s true that you see some businesses here closing, but other businesses are moving in because they know what the future holds.

Tuesday: A student who experienced bullying.

LRT construction: ‘Business dropped by about 40 percent. I cried many nights.’