Back when I lived in Connecticut and New York, adopting a dog was no problem. Our family simply visited a shelter — the North Shore Animal League and the Connecticut Humane Society, to be specific — and chose a pooch. We submitted one character reference, made a $100 donation and took first Puddle (1984-1998), then Dusty (1999-2008) and finally Jackson (2009- ) home in our car.

After we moved here, I decided that Jackson needed a companion. Truth to tell, Jackson was fine. I needed a companion, someone non-judgmental and adorable who would sit on my lap. (Jackson weighs 90 pounds and really belongs to my husband.) Normally, a grandchild would fill the bill but none were forthcoming.

But there are other reasons for city dwellers like me to yearn for a dog. Oddly enough, a dog connects you with other people. As Dr. Lynette Hart, director of the Center for Animals in Society at the University of California at Davis, wrote, “Dogs facilitate friendly interactions among people, as they so actively solicit play and offer greetings.”

Walk around a lake or down a street with your dog and, unless you own Cujo, passers-by stop to admire him, to ask what breed he is and where you got him. Those are perfect interactions for urbanites, what one of my city planning professors called “connections without intimacy.” With a dog, people know you — but not everything about you — as they do in small towns.

The Centers for Disease Control and Prevention claims that pet ownership has been proven to decrease blood pressure, cholesterol and triglyceride levels and “feelings of loneliness.” And dogs, because you have to walk them, require you to leave your TV or computer screen, get outside and move. Those are crucial health effects for urbanites (and suburbanites) who are stuck for much of the day in an office or car.

So last summer I started my dog hunt. I focused on rescues, hoping to save from euthanasia one of the 4 million pets who, according to the Humane Society, face that fate each year. Every day, I haunted Petfinder. I went to adoption events. I dibbsed dogs. I emailed queries to rescuers from eastern Wisconsin to western Minnesota. I filled out lengthy applications that asked whether I rented or owned my place, how old I was, how many hours I worked, where the dog would sleep and what he would do all day. (Were these rescue outfits thinking the dog would be reading Proust?) I had to list two references and submit to a home visit. On top of all that, the rescue groups charged $300 to $400.

No matter what I did, no matter how pleading my essay, no matter how dogcentric I tried to sound, I could not seem to persuade a rescue organization to give me — or rather sell me — a dog. Applications and emails went unanswered, or the dog was given to somebody else. Given my great age, one group did offer me a “senior dog” with “dementia problems.” I said “no,” even though I am not quite sure how much cognitive skill a dog needs.

I began to think that it might be easier to adopt a child. Available teenagers profiled every Thursday by Rusty Gatenby, the News 45 traffic reporter, began to look increasingly adorable. Knowing teens as I do, however, I didn’t think that any were likely to sit on my lap and refrain from judging me.

“Why, oh why won’t they let me have a dog?” I whined to my son who had adopted two cats from Chicago rescue outfits. “Why do I have to fill out long applications and have a home visit?” His answer: “Tell yourself that these groups really, really care and be patient.” Patient? You’d think that rescue groups would be in a hurry to move the dogs, what with millions facing doom every single year.

Finally, I gave up and did the politically incorrect thing. I purchased a dog — a combo shih tzu bichon. For $450, the breeder let me have him without checking my credit score or looking for an arrest record. And other than the fact that he recently left a present on my floor (the dog, not the breeder), he seems to be working out well. With Guthrie (named for the theater) in my lap, my blood pressure doesn’t rise even when I’m watching Rick Nolan on TV talking about how Congress works only 30 hours a week.

Dogs in a city can be problematic, however. They can’t roam around as they would on a farm — although people used to allow that. When I was growing up, a small pack ran freely in my North Minneapolis neighborhood. When I was a first-grader, walking home from school was a terrifying experience because one dog in particular would chase me home, growling and barking all the way.

Strict enforcement of leash laws has changed all that. If a dog is wandering around, somebody immediately calls Animal Control. Dogs are allowed in city parks but only if they are at the end of a lead. In recent years, however, urban dog owners who want their dogs to get more exercise than a run around the block have lobbied for off-leash parks. The first to be created was in 1983 in Berkeley, Calif., but the movement didn’t get rolling until 2003 when both Atlanta and San Antonio opened theirs. Now there are 2,000 across the nation. 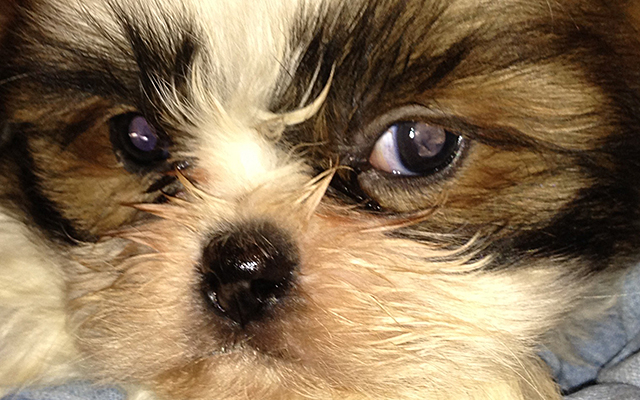 MinnPost photo by Marlys HarrisWith Guthrie in my lap, my blood pressure doesn’t rise even when I’m watching Rick Nolan on TV talking about how Congress works only 30 hours a week.

I was cheered to learn that Minneapolis came in 15th in a 2012 ranking by Men’s Health magazine of the 100 best cities for dogs. Such a kooky rating is a bit suspect, but its authors claim to feed many factors into their calculations, particularly the per-capita number of dog parks. Leading the pack were Portland, Ore. (which tiresomely seems to score best in almost everything); Colorado Springs; Wilmington, Del.; Seattle and Denver.

Sorry St. Paul, but you were number 38. Los Angeles came in dead last, possibly because it has only nine dog parks for a population of 3.8 million while Minneapolis has six for a city a tenth the size. St. Paul has just two off-leash sites, but they are rather large. (Perhaps Men’s Health should have measured acres per dog population rather than number of parks per humans.)

Dog parks have not come without controversy. Giving even a tiny bit of precious city parkland over to dogs, rather than children, has provoked furor in some communities. And neighbors sometimes complain that the parks bring litter and pollution. Two years ago, the Minneapolis Parks and Recreation Board took Martin Luther King Jr. Park in the Kingfield neighborhood off a list of possible sites for an off-leash park because the proposal drew criticism from members of the African-American community who felt that the park would be an affront to the civil rights leader’s memory.

There is a huge downside to dogs in the city, however: poop. Judging by the number of companies in the area called Poop 911, Pet Waste Professionals and the like, a lot of people allow their dogs to do their business in the backyard. And my own personal survey tells me that many Minnesota Nice types who walk their dogs in public areas do not pick up their pet’s offload. And there’s a lot of it. The Citizens Committee for New York City, which took the time to figure this out, estimated that each of the city’s 2 million pooches produced 275 pounds of waste a year. Surely, Twin Cities dogs do-doo as much.

Either way, to paraphrase Martha Stewart, that’s not a good thing. The Stormwater Manager’s Resource Center points out that “non-human waste represents a significant source of bacterial contamination in urban watersheds.” The bacteria poses health risks to humans and can spread disease. It may be time to start a dog-composting program —  gather the stuff in bins and let people use it to fertilize their lawns. The Citizens Committee for New York has been making $1,000 grants to neighborhood groups to create compost stations. If you want to go DIY, you can find instructions at CityFarmer. If we can conquer the pooh problem, dogs truly will be urban assets.

Joys and tribulations of doggies in the city