The economy may still be sputtering like a car engine trying to turn over in below- zero weather, but Minneapolis’ Uptown neighborhood is roaring. Modern apartment buildings have risen on former parking lots, and retail stores on Hennepin and Lake are mostly full. Calhoun Square, which I had come to think of as an echo chamber, wasn’t entirely empty early last Sunday morning — even though Uptowners supposedly don’t rise before noon. Restaurants were full, and Famous Dave’s was packed.

Maude Lovelle, executive director of the Uptown Association, a kind of neighborhood chamber of commerce, sighed when I asked her to tell me what was going on — as though it was all too much to talk about.

I had to sympathize; there was a lot to list, for one, a flood of apartment complexes: Flux, a 216-apartment development off Fremont, with “resort living, Uptown attitude;” 1800 West Lake, “where lakeside luxury meets urban sophistication,” kitty-corner from The Tin Fish off Lake Calhoun; Blue on Bryant, a 241-unit development “where Lyndale meets Lake;” the Murals of LynLake, “a stroke of genius at Lake and Lyndale;” Buzza Lofts, a renovated school building on West Lake St. with 138 units of affordable and market-rate apartments (“Rent. Renew. Revive.”); Uptown Lake Apartments, also on Lake Street (“Welcome to the heart of Uptown.”).

That’s a non-comprehensive list. More apartments are going up: The Walk Way, on the former site of Cowboy Slim’s; Elan Uptown, a luxury development on Dupont which advertises “The Uptown Lifestyle — eclectic and vibrant;” and maybe something at 2900 Lyndale. At least the last plan called for 147 units there.

But, as they say in those TV mail-order ads, “There’s more!” Looming between Lagoon Avenue and the Midtown Greenway is MoZaic, a new 10-story parking ramp with 65,000 square feet of office space. The builder, Stuart Ackerberg, CEO of the Ackerberg Group, says the offices are 80 percent rented, and Bar Louie, an Illinois-based grill restaurant featuring fire pits in its outdoor seating area, moved into the first floor. Ackerberg added a plaza with some rather unusual art that links via a bridge to the Greenway and eventually to a “meander” connecting it with Calhoun Square. 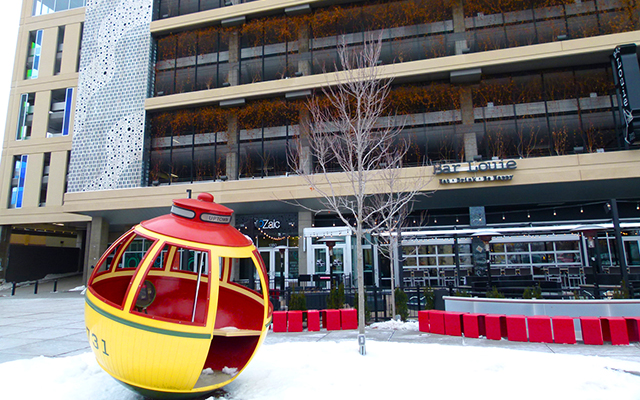 On the way is MoZaic Phase II. The details are vague at this point, says Joanna Hicks, Ackerberg vice president and project manager. The company is just now settling on an architect but is considering 100,000 square feet of office space, some retail and maybe a clinic or medical offices. “It’s the new idea of officing,” she says.

I didn’t know “office” was a verb, so that alone is new, but HIcks elaborated that the two buildings would be accessible by bike, on foot, by bus and car and that the offices had high ceilings, open spaces and offered views of downtown.  Moreover, during lunch and after hours, workers would be able to exit to restaurants and shopping. Instead of being isolated in a giant building in Bloomington or Hopkins, where they lunched at their desks, they would have the world available right outside the door. The concept seems very similar to how people “office” in Manhattan, where spending 12 hours at work becomes bearable when you can take your breaks at Bar Americain or Sak’s Fifth Avenue.

Already, the first MoZaic has attracted hip tenants — JohnRyan, a digital marketing company, and mono, an advertising firm. Their presence and those of other companies will make Uptown’s daytime population that much more robust, helping to boost ka-ching-ing at cash registers in the area.

Not that there isn’t already a detectable increase. Lovelle catalogued a batch of stores that have recently moved into the area. Timberland, CB2, Francesca, H&M, Atmosfere, Brass Knuckle Tattoo, Motto, Roam, Fluevog Shoes and several new restaurants. “I get five or six inquiries a week from retailers who might want to move in here,” she says.

Ken Seifert, general manager at Jones Lang LaSalle, rental agents for Calhoun Square, reports that occupancy now is at about 90 percent. “There are still a couple of spots on Hennepin and inside,” he says, but he says he’s looking for the right tenants — “shops that match the Uptown vibe, edgy, eclectic, not what you’d find at a regional mall,” he adds. “Not that there’s anything wrong with a regional mall.”

H & M, a recent addition, doesn’t seem that edgy to me — there is one at MOA — but it seems like a place where young Uptowners would want to shop.

Could it all be too much? “If there’s a boom, you have to worry whether there’ll be a bust,” says Ackerberg. “You have to hope we find a balance.”

To hear rental agents tell it, the demand for apartments seems unabating, but what about retail space? Many of the new buildings devote their ground floors to stores. James McComb, a Twin Cities retail analyst, doesn’t think there will be a problem. “I’m impressed with Uptown developers’ ability to fill those spaces,” he says. And not all of it will go for boutiques. “The spots can be used for a variety of service businesses,” he adds.

No one factor explains why Uptown is undergoing such a full-bodied renaissance. As everyone will tell you, the area has built-in advantages. The Chain of Lakes is nearby, and so is the Midtown Greenway. For decades the neighborhood has enjoyed a reputation for hipness with fashionable stores and eateries, trendy salons and nightclubs. “It’s been fairly recession-proof,” says Ackerberg.

What makes things different this time perhaps is the tsunami of upscale apartment buildings fueled by low interest rates and lenders’ inclination to make funds available for multi-family high-density housing — and not much else. In the past, single-family houses and old-fashioned brownstones dominated the area. Affluent young couples and empty nesters who might want to take advantage of a high-density 24/7 area, says Ackerberg, “were not ready to move into a funky old building.” Now they can live in a hip part of town yet enjoy granite countertops, stainless steel appliances, indoor swimming pools, health clubs, underground parking and high ceilings.

Uptown isn’t yet a done deal, however. Many of the new residential complexes have plenty of available space. Apartment advertising features chic-but-wholesome-looking young couples who, once upon a time, headed straight for the suburbs. Developers are betting that this newer generation, like their body-pierced and tattooed predecessors who pioneered Uptown, will reject long commutes, big houses and hefty mortgages. If they do, Minneapolis will have a truly urban neighborhood, diverse, lively and open all the time.

A boom is underway in Uptown