So you’ve got a kid, a newly formed adult, who is ready to launch. Where should you advise him or her to set up housekeeping?

Some 150 years ago, you might have said, “Go west.” That’s where the opportunities lay. By the end of World War I, the hot destinations had become New York, Chicago, Los Angeles and other cosmopolitan centers that could offer nightlife, stimulation and excitement. (Apparently, you couldn’t keep ’em down on the farm after they’d seen Paree.) After the Great Depression and World War II, the young Americans who lived through them opted for the reassuring blandness of suburbs. (Of course, subsidies for homeownership and highways pushed them along.)

These days we’re hearing that cities are making a comeback. To planners, civic leaders and others concerned about climate change and the environment, such an evolution makes good sense. Cities, no matter how bad their slums, are more eco-friendly than suburbs, if only because they’re more compact.

Writing in the National Geographic, Robert Kunzig, the science journalist, makes the case: “Their roads, sewers, and power lines are shorter and so use fewer resources. Their apartments take less energy to heat, cool, and light than do houses. Most important, people in dense cities drive less. Their destinations are close enough to walk to, and enough people are going to the same places to make public transit practical. In cities like New York, per capita energy use and carbon emissions are much lower than the national average.”

So where is human capital gathering? Well, Richard Florida, author of “The Rise of the Creative Class,” and his colleagues, mapped out the distribution of human capital to see which had the most, cities or suburbs. To figure this out, they looked at percentages of adults with bachelor’s degrees in the cities and suburbs of 331 metropolitan areas.

The result: you can find intellectual nirvana in either city or suburb; you merely have to choose the right city — but generally in cities with populations over one million. For example, the center cities of Raleigh-Durham, Seattle and San Francisco had the largest shares of college grads, all about 45 percent. Minneapolis-St. Paul came in 10th with 35 percent — not bad for the 15th largest metro.

But suburbs have their winners too. Just over half of adults in San Jose, Calif., suburbs have bachelor’s degrees, followed by San Francisco and Washington, D.C. Denver and New York, however, have larger shares of degree-holders in their suburbs than in the central city. Twin Cities suburbs fare not too badly with a share of 32.74 percent. (Researchers are measuring degree-holders in the population as a whole. Percentages of degree holders in the labor force would be higher, according to researcher Charlotta Mellander, a professor of economics at   Jönköping International Business School in Sweden, who did a good deal of the number-crunching.)

But do young people really want to live in mega-cities?

The evidence, as it turns out, is mixed. 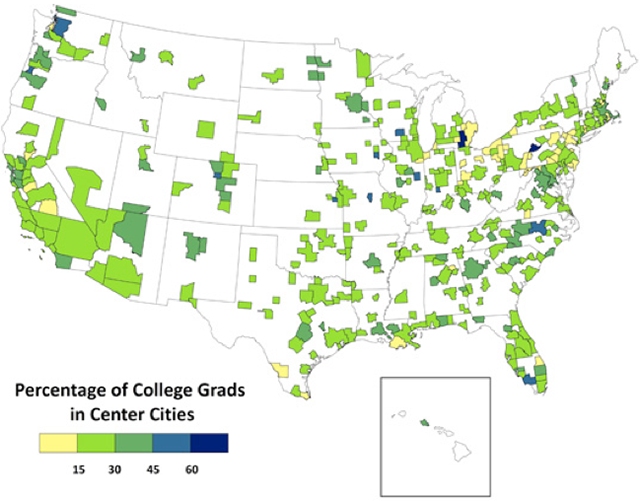 A 2011 report undertaken by CEOs for Cities, a research organization for urban leaders, claims that since 2000, the number of college-educated 25-34 year-olds has increased twice as fast in the close-in neighborhoods of large cities as in the outskirts of the same metros — 26 percent as opposed to 13 percent. From that, you could argue that, if you’re young, cities are where the action is. More young people are there, and presumably there’s more of what they want, like gastropubs and movie theaters and — I don’t know, I’m not young.

But there’s a counter-argument to all this, says Joel Kotkin, executive editor of NewGeography.com. He points to the fact that it is small and mid-sized cities with populations of one million or less that are adding jobs the fastest. The three exceptions — Austin, Houston and Salt Lake City — are themselves like giant suburbs. Some of the smaller towns (Odessa, Midland and Corpus Christi, Texas) are heirs to the energy boom, but Kotkin points to less likely growth centers: Glens Falls, N.Y. (a tourist destination), Columbia, Mo. (a college and government town) and Williamsport, Pa. (a revived manufacturing area).

Another point: In the last decade, large metros grew at an overall rate of about 9 percent while metros under one million grew by 15 percent. That shift from the previous trend, when the large cities gained most, is probably due to rather ordinary factors.  People want shorter commutes; and a smaller city may be more navigable and livable than a mega-city like New York or San Francisco.

It’s certainly more affordable. Kotkin argues that Americans still overwhelmingly prefer living in detached single-family houses. A survey by the National Association of Realtors found that only 7 percent of respondents said they would like to live in a dense area that was close to everything. Eighty-seven percent hankered for the backyard and picket fence. Such housing in large metros is a budget-buster for most families. They are more likely to find the room and amenities in the more modestly priced areas of small cities.

With all that, young people may be able to be successful in some small cities, most large cities or the suburbs of some large cities as long as they choose a place with job growth in their field and reasonably priced housing (if that’s what they want). Not so great are the suburbs of smaller cities, and, sadly, I guess, nobody is even mentioning small rural towns.

Cities or suburbs: Searching for the new land of opportunity