A lot of ink, of the digital sort, has been spilled (some right here) about the boom in apartment building in Minneapolis, in both downtown and uptown. It seems as though announcements of new projects come almost every day. The most recent: a renovation of the Plymouth Building, a 260,000-square-foot office complex on the corner of Hennepin and 6th, into 252 apartments.

A number of trends are supposedly driving the phenomenon. Oft-cited is Gen Ys’ and Baby Boomers’ growing preference for the amenities of the city — shops and restaurants within walkable distance, easy commutes and so on.

But that new partiality for city life, as exciting as it is for urbano-philes like myself, may be overstated. According to a 2012 survey by the National Association of Home Builders, there are still plenty of people who favor the burbs. Only 8 percent of some 2,000 respondents wanted to live in a city center. Some 36 percent would opt for the outer suburbs and 30 percent the close-in tier. A survey by the National Association of Realtors showed similar results: 87 percent hankered for the semi-open space of the suburbs; only 7 percent wanted to live “close to everything.”

And, when you stop and ponder for a second, it doesn’t make sense that every oldster would be looking to downsize to the chic North Loop. Most say they want to “age in place,” which may not necessarily mean their three-bedroom house (or assisted living) but an apartment in a neighborhood they already know.

The younger generation, moreover, many of whom feel unready to plunge into home buying, grew up in the suburbs and want to stay there — if only to take advantage of babysitting services from Mom and Dad. And, suburban apartments offer them more square feet for the buck. (Those Plymouth apartments are slated to average around 500 square feet and rent for $1,200 to $1,400 — which would seem to make them perfect for wealthy monastics. Too bad Benedict XVI already has a place.)

Not much going on

Given all that, suburban apartment buildings should be sprouting over the landscape like spring tulips. But in fact, says Chris Culp, founding partner of the Excelsior Group, an Eden Prairie real estate company, “There’s not a ton of stuff going on in the suburbs.”

Even though his company is developing The Flats at West End in St. Louis Park with 119 units, he believes the action is in the city. In fact, his biggest project just now is the rising complex at Hennepin and Washington that will house a Whole Foods store and 286 apartments.

Still, suburban projects are in the pipeline. Glenn Sansburn, senior vice-president for Wells Fargo’s Commercial Real Estate Group, says that in the past 24 months, the bank has financed seven.

Using Finance & Commerce’s Apartment Tracker database, I counted 26 suburban developments (totaling about 4,200 units) on the drawing boards stretching from Newport, Minn., on the east to Maple Grove on the west. (Those numbers overstate what’s going on, since some projects are bound to fall through.)

Compare that, however, to what’s going on in Minneapolis. Not counting student housing, some 54 projects, with about 9,000 units, are gleaming in developers’ eyes. Four thousand of those units are slated for downtown and another huge chunk for uptown. In St. Paul, there were only about 10 developments totaling about 2,200 units. 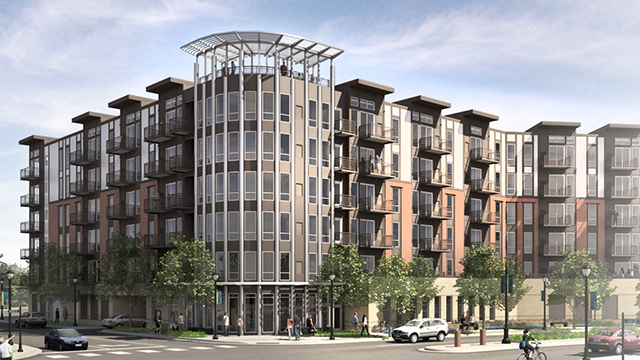 Excelsior GroupChris Culp, whose company is developing The Flats at West End, says, “There’s not a ton of stuff going on in the suburbs.”

Obviously, apartments are going to cluster in high-density areas. And single-family houses will always dominate suburbs. Still, it seems just a bit odd that the two cities, which claim only about 26 percent of the metro’s population, are getting 75 percent of the new apartment units.

One explanation for the downtown boom (and the suburban non-boom) comes from Mary Bujold, president and director of research at the Maxfield Research Group. “There’s been no new rental housing downtown for the past 10 or 15 years,” she says. Sansburn agrees, but claims that it’s been three decades.

As for suburbs, there was a spate of apartment building in 2004 and 2005, says Rob Bader, president of Bader Development, which is working on Elipse II, a 58-unit building on Excelsior and France in St. Louis Park. “That took a while to absorb,” he adds.

The apartment vacancy rate across the metropolitan area now is only about 3 percent, says Sansburn. And, while that’s pretty tight, “it’s skewed low because Minneapolis’ rate is about 2 percent.” Some far-flung suburbs, like Anoka and Plymouth, have vacancy rates of 5 percent. With a fairly healthy supply of apartments, there’s little incentive for developers to add more.

And suburban rents aren’t where they need to be to make things interesting. “It’s easier to build if you can get $2 a square foot,” says Colleen Carey, president of the Cornerstone Group, a Richfield developer. Others asserted that because suburban land is relatively cheap, they could get rents down to $1.70 or $1.40 a square foot.

When I conducted a brief on-line shopping expedition for suburban apartments, however, I found some pretty good-looking units for as little as 81 cents a square foot.

It isn’t rent so much as meeting a trifecta of requirements that apartment-dwellers now seem to demand, says Sansburn. “Proximity to transit, proximity to jobs and proximity to services.” Those elements now determine where developers are putting up buildings. That means inner-ring suburbs like St. Louis Park, Bloomington and Golden Valley.

Interestingly, the developments now underway in the suburbs look more like city than country. “What you won’t see are garden apartments,” says Sansbrun.

Typical perhaps of the new urban-suburban vision is Lyndale Gardens in Richfield, a mix of 154 apartments and 10 townhouses, undertaken by the Cornerstone Group. It is located near express bus lines, near jobs at office buildings in Bloomington and Richfield, and it’s offering a plaza-load of heart-of-the-city amenities, some financed by the Met Council. They include a concert stage, a kids’ splash pad, edible demonstration gardens, fruit trees, a fire pit, an outdoor pizza oven and a co-op food market. And for the nature-lover, there’s nearby Richfield Lake.

Says Carey, “It’s near transit in a setting that is beautiful.”

Minneapolis apartment development booms, but not in the burbs