I haven’t lived here all that long, but apparently, every few years, a proposal comes forth — or a hint of a proposal or a study of a proposal or a proposal to study — building an industrial-strength 1,000-room convention hotel in downtown Minneapolis. And, lo and behold, the idea surfaced again on Wednesday.

That’s when Meet Minneapolis, the city’s convention and visitors bureau, released the results of a feasibility study for such a hotel near the Minneapolis Convention Center. What prompted the study, says Peter Mihajlov, chairman of the Meet Minneapolis board and co-founder of Parasole Restaurant Holdings, was the fact that “there was a drop-off in large conventions coming here.”

The assumption going in was that Minneapolis does not have a hotel big enough and close enough to the convention center to attract, say, the Rotary International, the American Dental Association or a mega-trade show whose attendees would open their wallets and rain dollars on downtown businesses.

The study, led by Convention, Sports & Leisure International, an industry consultant, with Hospitality Valuation Services Consulting & Valuation (HVS), however, did not give the hotel a full-throated endorsement.

There were two counts for the hotel and two strikes against. As one plus, the study concluded that with occupancy and room rates up to around 70 percent (now that the worst of the recession is over), the hotel business in Minneapolis would probably grow naturally with or without the addition of a convention hotel. Ergo, the new place, which I will henceforth call El Grande for simplicity, would simply be accommodating new growth — so it may as well be channeled to a site near the Convention Center where it could do some good. Point two: El Grande would help lure new convention center business, especially from the biggest associations.

On the flip side, the addition of 1,000 rooms to the stock of downtown hotel inventory would definitely create a glut, at least temporarily. And, here’s the really negative clincher. El Grande, by the consultants’ estimate, would cost $304.5 million and would require a sizable subsidy from taxpayers, something in the neighborhood of $125 million.

Consternation has to be the reaction of any Minneapolitan who hears this news. After all, only a decade ago, the city fronted $211 million, at the recommendation of other consultants, to expand the convention center itself in hopes of receiving a tidal wave of new business. Instead, it’s bobbled along with something more like a Bassett Creek stream of revenue that covered only a portion of its costs.

By the city’s reckoning, in 2012, operating revenue was projected to come in at $14.2 million, along with an operating deficit of $10.8 million. For 2013, budgeteers expect revenues to climb to $14.8 million but noted: “The Convention Center continues to discount rents heavily to be competitive.” So we can probably count on a deficit that’s about the same size as last year’s

Between the original happy anticipation and the-less-than thrilling results, of course, a recession happened. Many organizations scaled back meetings and travel. And there were also unforeseen changes in the convention business itself. For starters, mammoth meetings and trade shows seemed to be going out of style. And dozens of other cities, which perhaps had listened to the same consultants hired by Minneapolis, expanded or built new convention centers of their own. The result: two much space and not enough business to occupy it. A couple of convention centers (South Lake Tahoe, Calif., and Valley Forge, Pa.) filed for bankruptcy. At least that didn’t happen here, thanks to a batch of hospitality taxes.

Beyond all that, however, I have to wonder whether Minneapolis has a prayer of attracting the big-boy conventions and trade shows. After all, we can’t possibly compete with the year-round luscious weather of playgrounds like San Diego or Orlando, which both offer legions of monster-sized hotels, outdoor swimming, golf courses and tourist magnets like a zoo and Disney.

But Minneapolis does have its attractions. Steven Sherf, president of the Hospitality Consulting Group in Excelsior, says that despite the climate, groups find Minneapolis appealing. “The crime rate is low, the downtown is very compact, there’s a lot to do, and the skyways help with the weather,” he says.

In any case, Peter Mihajlov points out that Meet Minneapolis is not trying to vie with Orlando or San Diego. The study, he says, compared us to towns like Indianapolis, Denver, San Antonio, Baltimore and Kansas City. “We should be able to do as well as they do,” he says.

So what has Indianapolis got that we haven’t? (To attract conventions, I mean, not pretty lakes, theater and a brainy populace, all of which we do have). What’s supposedly lacking are “committable rooms.” Folks who orchestrate conventions like to have a critical mass of hotel rooms within a half a mile of the convention center that can be block-booked. And while the consultants’ report didn’t say to me that our convention business had fallen so much further below that of our rivals’, we did have fewer committable rooms, about 3,000, compared to Denver’s 6,400 and Indianapolis’ 6,045. And those two cities both had convention hotels nearby with 1,000 rooms apiece. Denver has two. 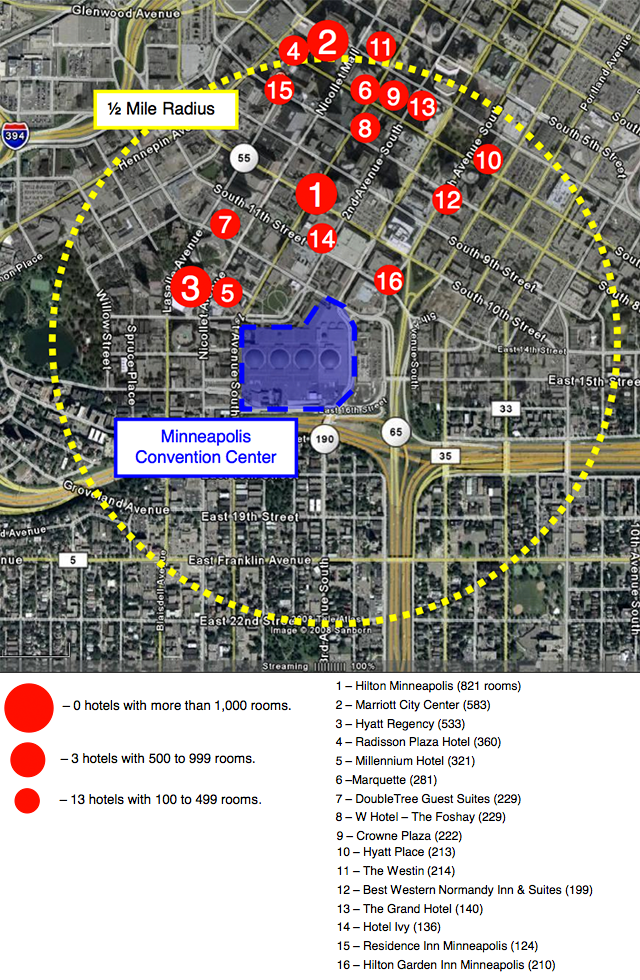 If that convinces you that we need El Grande, take a look at the financial projections. If they are beyond you, here’s the general conclusion: “Room revenue per available room generated by new convention-oriented hotels continues to not support a rate of return required by private equity investors.” And the consultants go on to list the magnanimous gifts in free land, tax-free bonding and tax abatements granted by both Indianapolis and Denver to help private developers erect the hotels. The list of goodies made my inner Republican scream “Don’t do it!”

Worse, competing hotels in downtowns where new convention-center hotels were built sometimes took years to absorb the new rooms. In cities where convention hotels were constructed well before the recent recession, the market popped back within a year. Denver’s recovery, however, lasted five years. And the consultants’ report projected about the same for Minneapolis, even if room demand rises by 1.05 percent a year.

Understandably, downtown Minneapolis hoteliers might be a bit upset at learning this. I could not reach Ralph Burnet, owner of Le Meridien Chambers Minneapolis, but from what I have read, he sounds just short of apoplectic, describing himself as “violently opposed” to a new hotel, especially one backed by public subsidies.

El Grande, however, is not by any means a done deal. Meet Minneapolis has formed a task force to dig deeper into the issues. “We have to figure out where the [convention] market is headed, and what the sweet spot might be for us,” says Mihajlov. “We also need to see whether there are opportunities to better package what we have.” Minneapolis can’t just kiss off the convention business; it supports 27,000 jobs directly and indirectly.

So, stand by. There’s another report in your future.