Just for a moment, let’s forget about whether the money from electronic pulltabs will be enough to pay for the new Vikings stadium. Or whether there will be cost overruns. Or whether football will continue to be popular. Or whether tax dollars should be used to finance a stadium to begin with.

Let’s forget about all those practical considerations and ponder the design that architects unveiled Monday night for official approval by the Minnesota Sports Facilities Authority and the unofficial approval (or disapproval) of herds of local notables and football fans crowding the Guthrie’s Wurtele Thrust theater.

If you put all that aside, you would have to grudgingly—or maybe not so grudgingly—admit that the plan for the new structure is impressive.

In devising their schematic, HKS, the architects, entertained a mash up of ideas: that such a building should not fight its climate; that it should use materials that work in this environment; that it harmonize with the public structures we already have; and that it incorporate digital technology and meet the criteria of sustainability. Wondrously, in the design they came up with that mashing became a meshing.

Take the weather problem, for example. The low domed roofs used in many stadium designs—suitable perhaps for places like New Orleans—require a huge amount of reinforcement to withstand Minnesota’s heavy snows, like the 27-incher that caused  dome-plosion back in 2010. Instead, said Brian Trubey, HKS’design principal, the mantra became “get the snow off the roof.” So the roof of the new stadium will be pitched steeply enough to shed the snow automatically. That configuration allows for lighter and less costly structural support.

I do worry about Volkswagen-sized clumps of snow landing on hapless pedestrians. But I’m hoping that HKS can solve that problem because the pitched roof gives the building a look that’s unlike most stadiums you’ll ever see with a peak that at one end will be perhaps 10 stories tall. It also allows heat from the sun to collect in the highest portion of the building— the so-called loft. That warm air can be shunted down to the stands on cold days and vented outside on hot ones.

Half of the stadium’s roof will be covered with a material known as ETFE (ethylene tetrafluoroethylene, in case you wondered), a transparent polymer used for the Water Cube aquatics center in the 2008 Beijing Olympics. Trellis-like structures would under-gird the roof while most of the exterior walls would be glass, which is, given all that sand we’ve got, an indigenous material. One wall would allow for views of downtown Minneapolis, and the front of the building would open up to the plaza through four 95-foot-high pivoting glass doors. I’ve seen a much smaller version of such a door—about 30 feet high—in Sao Paulo, Brazil, and it was stunning. 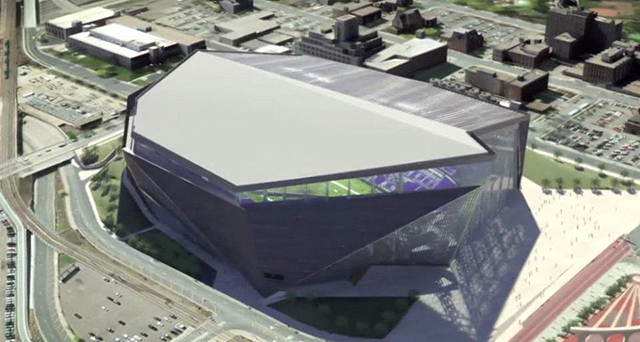 Add in some zinc framing, which, Trubey asserted, develops a patina with age that transforms its coloration with the change of season and hours of the day, and you’ve got a building that is striking. Some people have said that it looks like a ship; I think asymmetric greenhouse is more like it. But oddball structures, Trubey asserted, are very much in line with Minneapolis’ historic tilt toward the non-traditional. To prove the point, he showed slides of other local architectural icons: the Walker Art Center, the Weisman Museum, the downtown library, the Guthrie and that spoon with the cherry in it.

I can already hear people kvetching, “What about the retractable roof?” I am not sure why it’s so important. Yes, it’s pleasant to sit in the open air (though not often during the late fall and winter), but Trubey explained that it can’t be operated under certain climactic conditions (he didn’t specify which, but I would guess ours), and that many stadiums that have them (and he emphasized that HKS had built several) didn’t use them all that often. By foregoing the $40 million to $60 million extra, the architects could add other goodies.

And there are goodies aplenty, all of them bringing roars of approval from the Guthrie audience: two of “the largest video boards in the NFL,” each 120 by 50 feet; thousands of feet of video ribbons running around the seating tiers; a sound system that, according to Trubey, “makes you feel like you’re in the game” (complete with concussions, I suppose); and WiFi, so that fans with smart phones can tweet and Facebook and instagram and watch players in the locker room while taking in the video boards and ribbons and maybe even occasionally watching the game.

A series of eminences then climbed onto the thrust stage to proclaim their support: R.T. Rybak who said that the new stadium would make the downtown east neighborhood “a place to work and play instead of a place of abandoned parking lots,” coach Leslie Frasier who pronounced the plan “fantastic,” and players John Sullivan and Phil Loadholt. The parade wound up with Vikings Hall of Fame head coach Bud Grant. “I’m sold,” he told the cheering audience. “If there were any questions, this evening answered them.”

With that, the five members of the Sports Facilities Authority took to the stage and voted to adopt the plan. Next stop: the Stadium Implementation Committee, where approval is a foregone conclusion. Committee Co-chair Tom Fisher, dean of the University of Minnesota School of Architecture, had already told me earlier in the evening: “The stadium is going to be big, bigger than I thought. But that’s OK because football is a spectacle, and this will be spectacular.”

I don’t know whether this is the right moment to go quite so big. Attendance at NFL games sagged in the recession and only last year regained 2008 levels. Some sports mavens predict that an increasing share of fandom will save the immense price of a ticket and watch the games on their flat-screens, tablets, laptops and phones. The future football stadium could shrink to the size of a football studio—or a basketball venue, anyway, which would seat, say, 17,000 instead of the 65,000 planned for our new yet-to-be named stadium. In any case, the Vikings would only play there 10 days a year. 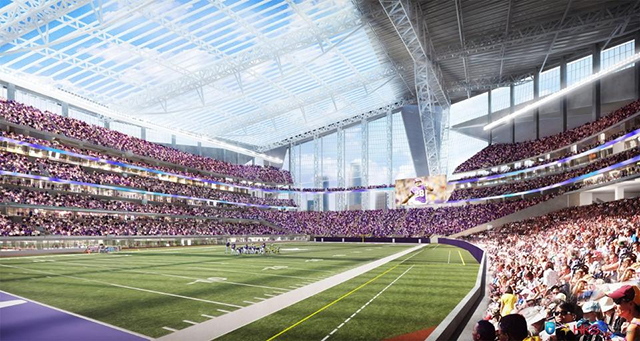 For those reasons perhaps, some speakers during the evening made a stab at rebranding. People call it the Vikings stadium, said Mark Wilf, the team’s co-owner, but it will really be a multi-purpose building. High school soccer and college baseball teams will play there; the stadium will play host to concerts, monster trucks, marching band competitions, maybe major league soccer and hopefully big events like the Final Four and the World Cup. “And the Super Bowl,” yelled someone from the rafters.

Nobody can predict with any certainly that all that stuff will happen. I am reminded of Beijing’s architecturally remarkable Bird’s Nest Olympics stadium, which announced to the world that China had arrived as a world power. But high maintenance costs have discouraged teams from playing there, and most of the time it sits empty.

But, as I say: Let’s put those worries aside and, for a brief while, let ourselves be impressed.