On Tuesday morning, not one but two Minneapolis City Council committees met to approve the creation of a so-called Value Capture District, which would devote the area’s property taxes to financing a streetcar line on Nicollet Avenue.

Transportation & Public Works and the Ways and Means/Budget Committee took about an hour and a half to question the scheme, take testimony from the public and vote.

In the end, the endorsement was unanimous, except for an abstention from Meg Tuthill, who represents the 10th Ward. “I’m very conflicted,” she said. “There are too many unanswered questions.”

Chief among her worries was whether the Metropolitan Council would pay for the operation of a streetcar system; the value-capture scheme covers only planning and construction. She urged her colleagues to delay their approval until they get the answers to all their questions.

The problem is, waiting is not a terrific option, and here’s why. (Be patient; this takes some explaining.)

To finance the $220 million needed for the initial 4-mile streetcar line, the city lobbied the Legislature — and won from it — the right to create a special district where property tax revenues from new development would go to the streetcar project (and not to the maws of its own general fund, Hennepin County and/or the school board).

The Value Capture District is a lot like a TIF, or Tax Increment Financing district, which has been used extensively in our state and others to subsidize all kinds of private development, including stores, office buildings, manufacturing plants and so on.

City of MinneapolisThe Nicollet‐Central Transit Alternatives Project will
identify a preferred transit enhancement which could
serve as a first phase of a longer‐range vision for transit
service throughout the 9.2‐mile corridor.

With a TIF, a local government designates a targeted development site. The tax valuation of the site is then frozen at its pre-development value. Supposedly, new development will grow up around the new office or factory and boost property values; any amount over the initial frozen property value within the district goes to help repay the bonds the city floated to help finance the thing in the first place.

To illustrate: Let’s say, there’s an empty lot in Bow-wow City that Amalgamated Doghair would like to build on. Amalgamated claims that it needs help to build its factory (and if it doesn’t get it, it might just move its operations to Kurdistan), which would create 40 jobs. Bow-wow City is, of course, hot to have jobs, so it declares the empty lot and a couple of blocks on all sides a TIF district.

Let’s say, all the land in the district is worth $2 million on which the owners have been paying a 5 percent annual property tax or $100,000. Using its bonding power, the city borrows money for Amalgamated to put up its factory. If Bow-wow City is lucky, Tail-wag Treats and a couple of other factories buy up other land in the TIF district and build there, too. In three or four years, the TIF property is worth $10 million, which generates $500,000 a year in property taxes. The $400,000 increment taxes go to repay the bonds.

TIFs can be a bit risky. The city can’t lay its hands on that extra property tax dough until new development is up, running and reassessed. And sometimes the new factory or office does not attract all the extra economic growth that city leaders hoped for, leaving tax valuations little higher than they were previously and the city is on the hook for funds to repay the bonds. Oh, and maybe six years out, the factory moves to Kurdistan anyway, or Iowa.

The new Minneapolis Value Capture District, however, is a slightly different animal.  Instead of channeling handouts to corporations, money will be devoted to public transit, specifically streetcars, and only for one line, on Nicollet. And the district is odd.

Instead of one vast stretch, it’s made up of five discrete parcels where development is already under way:

• One parcel, at the intersection of Hennepin Avenue, for example, is the site of the new Whole Foods supermarket and a five-story apartment house above.

• The second — a 33-story, 330-unit luxury apartment building called Nic on Fifth and the 4Marq Tower nearby with 262 units is slated for — well, I guess the names of the projects should tell you where.

• At Spruce Place and 13th, another couple of hundred units are under construction.

• And finally, across the Mississippi where Totino’s Italian Kitchen once did business, a development of 130 market-rate apartments, commercial space (maybe Totino’s will rise again) and a 900-square-foot dog run are under discussion.

With the exception of the Totino’s property, all of these new buildings are pretty much sure things. 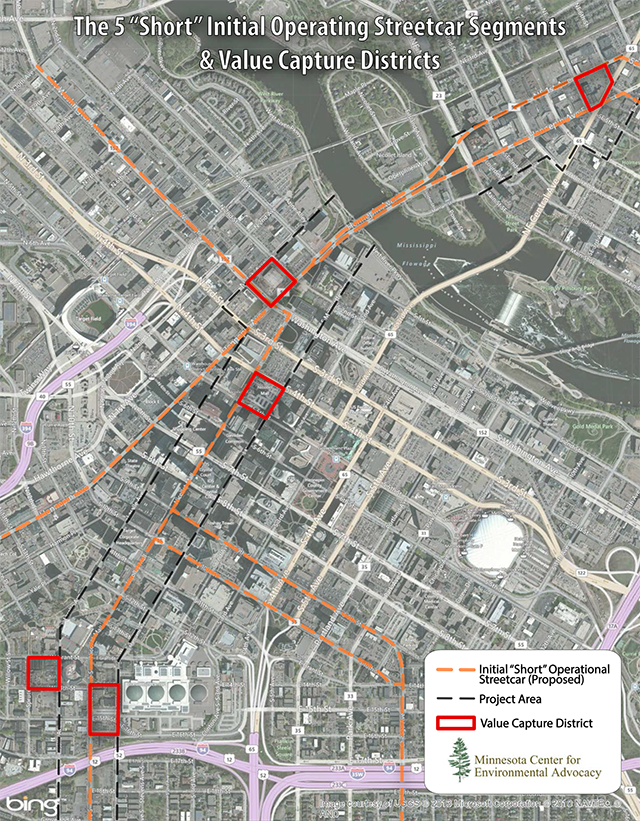 But to get the most out of them for streetcars, the City Council — and later Hennepin County — have to act fast. Why? If the local governments approve the measure before the end of this month, then the base value of the district would be frozen at its Jan. 1, 2013, level, what it was before development occurred. An increment in tax revenues would start to come in next January.

If there’s stalling until after July 1, however, then the base value of the property would be higher (since some development already would have occurred), and the amount of money the city would reap would be smaller. Worse, the dough wouldn’t start flowing until 2015.

According to the city, if all these developments are completed in the next three to four years, taxes captured by the “district” could total $5 million a year, presumably enough to repay bonds the city would sell to finance the streetcars.

The Value Capture District is an idea that’s been discussed in academic circles for a while as a way to generate money for public improvements without leaning on taxpayers. One study, done by H. William Batt in 2001, for example, showed that Value Capture could have been used to finance the Northway, a nine-mile portion of the New York’s interstate highway system. The added increment of land value attributed to that section of the road came to 11 times the cost of the right-of-way acquisition, road and bridge construction, according to Batt.

A couple of citizens — including Cam Winton, an independent candidate for mayor —appeared before the committees to object to streetcars and the creation of the Value Capture District.

It’s not true, Winton argued, that streetcars spur development. People point to Portland, Ore., as an example where supposedly more than $1 billion in new business activity grew up around its streetcar line. Much of it, according to Winton, was prompted by tax rebates and other giveaways to corporations. Any tax money flowing to the city from new development should, he contended, go to ordinary city functions, such as police and schools.

The Value Capture District will divert tax money from the general fund, but it’s tax money that the city wasn’t previously receiving anyway. That’s one way to look at it.

And to wring $100 million or so for its streetcar line out of the federal government, Minneapolis has to show that it’s making a financial commitment. The Value Capture District allows that without requiring any tax hikes or special appropriations. Like it or not, you have to admit that it’s a pretty clever device.

Next step for Value Capture: a June 25 vote of the full City Council.