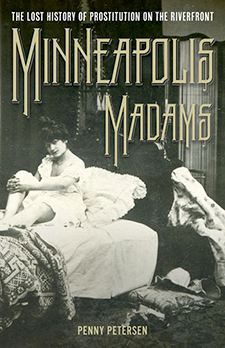 Right around the corner from the condo complex where I live on Washington Avenue sits a rather elegant three-story brick building. Yes, it’s a Midwestern brick box, but, with white brick eyebrows adorning its windows and a set of colonnaded balconies above the door, it has a solid beauty. I figured that it had to have some historical significance; if not, the developer of my building would have knocked it down and filled in the space with more condo units.

What I didn’t know was that 212 Eleventh Ave. S. is the lone surviving bordello building in Minneapolis.

That news came from “Minneapolis Madams: The Lost History of Prostitution on the Riverfront,” a fascinating account of the city’s red-light districts and the ladies who ran them. It comes from Penny A. Petersen, a researcher with Hess Roise, a historical consulting firm. (Who knew that there were jobs for history majors? See, Mom, I told you my degree wasn’t worthless.)

Unearthing the details took the author 10 years, and considering all the property records, court filings, newspaper clips and other material she assembled to tell the story, I’m surprised she didn’t need 20. In tracking the rise and fall of these houses of ill repute, Petersen unveils larger contexts for understanding their story: sexual double standards, the impossibilities faced by women trying to survive in a society that wouldn’t pay them a living wage, and the nearly always hypocritical drive of city fathers to purify the city of prostitutes, even while — not always secretly — patronizing them.

With all that, Petersen provides plenty for city planners and other urbanists to think about — in particular, what to do with the stuff that doesn’t necessarily shed glory on your city.

Meanwhile, back to 212 Eleventh Ave. S. The woman who commissioned it was Ida Dorsey, a madam of mixed race who grew up in Kentucky and, according to her own account, began running a bordello at age 16. After arriving in the Twin Cities, she operated a brothel at Fifth and Jackson Street in St. Paul that catered to “colored soldiers.” In 1886 she moved to Minneapolis, where she marketed services to the city’s elite.

On the outside, the house at 125 North Second St. where she then ran her business was shabby, but the interior was lush, with mirrors, fancy wallpaper and heavily upholstered furniture. More alluring were the forbidden pleasures she offered: interracial sex, can-can dancing and live sex shows. According to one contemporary account, there was “something so weird, so wild and so abandoned in the revels of these dusky beauties that the fast men of the city and others who are becoming so, are drawn in large numbers to the place.”

Not everybody was thrilled with the success of Ida Dorsey and her competitors. Many citizens liked to view their town “as a sober, moral, entrepreneurial population engaged in building an industrial and commercial powerhouse,” says Petersen. So, from time to time, citizens’ committees and civic leaders would call for prostitution to be stamped out.

But there was also a narrative that men — particularly the transient lumberjacks and agricultural workers who had no families nearby — had needs for liquor and sex that couldn’t be altogether eradicated. So in practicality, the city opted to contain the contamination by confining the vices to special red-light districts. Reformers could appear to be in control, writes Petersen, while allowing the madams to conduct business freely — and “accumulate ever larger bankrolls.”

The accommodation helped to balloon city revenues. Prostitution remained illegal, but every month streetwalkers and madams would appear in court, pay a fine for their evil deeds and then resume their business as before.

The first red-light district clumped around Third Avenue S. and First Street but was soon outclassed by a second that grew up across the Hennepin Avenue bridge on Main Street. There, madams with higher aspirations acquired land through proxies and fronts and commissioned prominent architects to construct posher “resorts” to cater to travelers who would visit an Industrial Exposition Hall erected by the business community. The Block E of its day, the Exposition Hall never attracted much commercial activity, but the vice houses prospered anyway. (New idea for Block E: Rename it Den of Iniquity and convert it into a multiplex of porn and sin.)

From there, the madams themselves launched another district, many of its establishments on the very block where I now sit and type. Some 23 addresses on Second Street and on Eleventh and Twelfth Avenues became brothels. Petersen says that it’s not quite clear how or why the city allowed the expansion, except to suggest that many of the madams had non-sexual business dealings with prominent citizens (buying lumber for their bordellos from them, for example).

But the new red-light neighborhood had obvious logistical advantages; it was within a Liquor Patrol District (liquor was not allowed to be sold outside of designated areas), close to flour mills and railroads that would generate walk-in customers and on the Washington Avenue streetcar line. These days, it would be called a lively mixed-use transit-oriented walkable environment.

The advance of technology led to the undoing of the bordello. With telephones came call girls who, instead of being ensconced in a boudoir, visited customers’ hotel rooms and offices. And, after a multi-decade campaign, temperance organizations, churches, neighborhood associations and government reformers succeeded in shutting down all the brothels by 1915.

But they deluded themselves if they thought they had stamped out prostitution. It merely went underground, and, as Petersen points out, instead of having three red-light districts, the entire city became a red-light district, which explains why these days, prostitution busts pop up all over both cities and suburbs.

And what happened to the Eleventh Avenue red-light district? Except for 212, most everything was torn down, and you guessed it, they put up a parking lot.