Buildings usually last far longer than the activities they once contained. Greek temples, Aztec pyramids, Roman coliseums (or colisea) and medieval dungeons stand today — even though, for the most part, people no longer worship a pantheon of gods, engage in human sacrifice, fight gladiatorial games (no, the Vikings and Twins don’t count) or put their fellow citizens on the rack.

Yet, most of these structures have managed to find useful lives as historical monuments or examples of architectural beauty. Think Taj Mahal, which is basically a tomb.

These days, unfortunately, our landscape is littered with the much less interesting and frankly butt-ugly remains of the recent past: old manufacturing plants, strip malls, gas stations, big-box stores and airfields.

With the exception of some picturesque 19th Century buildings — such as Schmidt’s Brewery in St. Paul, part of which is to be transformed into artists’ lofts, or the Ford Center in downtown Minneapolis, which now houses architectural offices and other businesses — most of these abandoned properties are not only eyesores, but also environmental hazards.

Such white elephants can cost millions to remediate — that’s environmentalese for “cleanup.”

Take the old Ford Assembly Plant in St. Paul. One of 135 motor plants across the country now sitting empty, it’s headed for demolition, at a cost of nearly $6 million. That figure doesn’t take into account cleaning up solvents and lubricants that may have pooled in the soil under the slab floors.

Typically, the owner of the property is responsible for fixing up the property, says Martha Faust, executive director of MN Brownfields, a nonprofit that promotes the efficient cleanup and reuse of contaminated land.

Ford is footing the bill for the demolition of its assembly plant. But some owners walk away from their properties, leaving the local government on the hook to demolish the building and cleanse the land of chemical pollutants.

Schmidt’s still has a website, but the company was sold to Heilman Brewing of Wisconsin, which was in turn sold to an Australian company, which itself collapsed. The property has changed hands a couple of times since then, but Dominium, which now plans to put up the housing, is collecting $4.2 million from government agencies — Ramsey County, the Metropolitan Council and the Minnesota Department of Employment and Economic Development — for remediation of the site.

There is a federal source of money to help pay these bills. Livable Communities provides grants (via the Met Council) to help cities put up affordable housing, improve access to travel and promote walkable development — mostly by remediating land or buildings with some kind of environmental damage.

Since the program got started in 1995, the Met Council has doled out some $95 million. Recently announced projects include $179,300 to clean up the site of two former North Minneapolis gas stations, which will make way for Praxis Marketplace, a grocery store; $535,000 for asbestos and lead paint abatement at Pentagon Park, an office development in Edina; and $487,000 for the former site of the Shapco Printing Co., which needs everything — cleanup of soil, groundwater, asbestos and lead paint.

An alternative to taxpayer funding?

But maybe there’s another way, a way to avoid sticking taxpayers with the bills.

Rex LaMore, director of the Center for Community and Economic Development at the Michigan State University, and Michele LeBlanc, a researcher, have written a paper (PDF) proposing a simple solution to the problem — for future construction anyway.

They suggest that, years earlier, when a company proposes a building, the local government require it to buy an insurance policy that would cover its dismantling, should that become necessary. It would be a kind of a building life-cycle insurance policy, and the premium would depend on the estimated future cost of demolition, removal and restoration. Builders could cut their costs by using recyclable materials in construction and, I suppose, refraining from polluting the groundwater and soil. 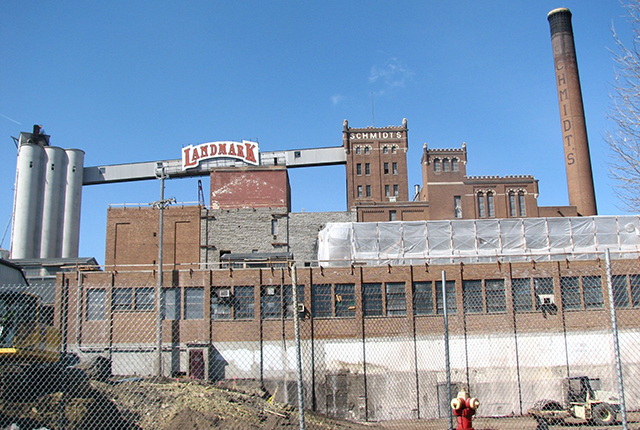 MinnPost photo by Joe KimballPart of the Schmidt’s Brewery building in St. Paul is to be transformed into artists’ lofts.

There are other ways to incorporate the cost of deconstruction into the initial development. LaMore and LeBlanc point to the Surface Mining and Reclamation Act of 1977 as an example.

Because surface mines, which include strip mines, open pits and quarries, can be dangerous and environmentally hazardous when abandoned, Congress requires mine operators to pay a set fee (31.5 cents per ton of coal, for example) into a pool that defrays the cost of closure and cleanup of mines that have been exhausted.

Another type of insurance is the performance bond. One locality in Michigan, authors point out, requires wind turbine operators to post a bond to pay for deconstruction of the structure when it’s decommissioned. The towers generally last only 20 to 30 years and cost about $4 million to dismantle.

The authors list some disadvantages to their proposal: mandating such insurance might encourage builders to put up flimsy buildings that are cheap to take down, increase the cost of construction and operation and could discourage new development in communities that require the insurance.

I foresee other problems. I am not sure that insurers are necessarily savvy enough to predict demolition and cleanup costs 20 and 30 years out. And, I am assuming that the insurance would be a single-premium affair, with one big payment upfront. The idea seems less workable if building owners have to pay premiums every single year, as though they were buying health insurance.

It probably wouldn’t make sense to apply such a requirement to every dinky office building or store that arises on the horizon. But demolition and remediation insurance would make sense for large factories, malls, big-box stores and other major developments. And to work, the law would have to apply statewide.

Of course, LaMore and LeBlanc are writing from the perspective of Michigan, whose cities have suffered devastating population losses and widespread residential, industrial and commercial abandonment. “I’m grateful that the Twin Cities are not in that dire situation,” says Martha Faust.

Still, the insurance plan is worth thinking about. Not only would it help towns and cities avoid the costs of future demolition. But businesses that find their big-box stores, manufacturing plants or strip malls no longer meet their needs might take comfort in knowing they have funds to tap, should they have to take down a building and clean up the land it sits on before selling the property.