Wednesday brought the dismaying news from the Metropolitan Council that the Southwest Corridor LRT could cost as much as 32 percent more than originally forecast. That’s a pretty hefty bump, considering that the line was already pegged at $1.25 billion. And that total is in 2013 dollars. If the state Legislature and the Feds delay funding for a few more years, which is all too likely, costs will balloon even more.

At issue are eight different options for relocating freight travel to St. Louis Park or keeping it in Minneapolis.

There are six possibilities for running through what is called the Kenilworth neighborhood, which is the splotch of land between Lake of the Isles and Cedar Lake, and two possible alternates in St. Louis Park. If you want to know the gory details, you can consult the Met Council’s announcement.

But briefly, they sort out like this. Running a shallow tunnel through Kenilworth would cost $150 million to $160 million, while rerouting the freight train through St. Louis Park (notably its high school football field) would cost up to $210 million. Sending the train into a deep tunnel through Kenilworth would raise the tab by as much as $320 million; it would probably disturb neighbors least, although I don’t think they’ll enjoy the three or four years of Big Dig-like construction.

I am a stout supporter of mass transit. But I am also an advocate of taking the path of least resistance; and the Southwest LRT is starting to look like anything but. I realize that a train already runs through Kenilworth. My grandmother lived in an apartment in front of the rail line, and she said that one could get used to it — she slept right through the noise. But freight trains don’t run as frequently as the LRT will. And the alternative — smushing a railway through St. Louis Park — will, according to the Met Council, require the taking of 46 homes and businesses.

How much simpler things might be if we instead ran the commuter line, maybe a streetcar, along major arteries instead of tracking it through neighborhoods, particularly those near lakes and bike trails. And aiding and abetting this odd-ball thinking is an old map (pictured below) of the Twin Cities’ trolley lines, which were dismantled in 1954. 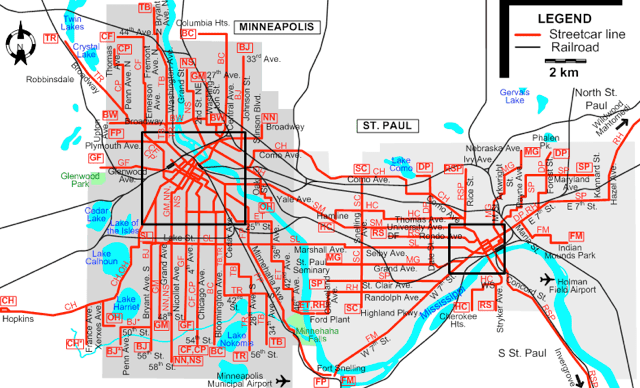 In the heyday of trolleys, a line did run southwest all the way to Hopkins. And talk about disturbing the peace! One segment traveled down now posh East Calhoun Parkway. Any government entity that tried to repeat that nowadays would likely face crowds with pitchforks and torches. Nevertheless, the old lines suggest some ideas for the new route.

Currently, the plan is for the Southwest LRT (which has been rebranded as “the Green Line”) to start in downtown Minneapolis at Target Field, proceed to the intersection of I-394 and Dunwoody Boulevard and then head west to Penn Avenue and then to Kenilworth, where it would stop at 21st and Thomas — and wreak all kinds of expensive havoc, what with rerouting freight trains and so on.

Instead, how about having a streetcar line run from Dunwoody, down Hennepin Avenue — or along the parallel Grand Avenue, take a right on Lake Street (with maybe a stop at Hennepin and Lake and perhaps points in between)? From there it could hit the next planned stop at West Lake and Chowen and continue on its merry way to Eden Prairie.

I could also see putting a streetcar down the Mall (which parallels Lake Street). It’s wide enough to accommodate a tram, and the route could veer slightly along the mostly uninhabited portion of East Calhoun Parkway to hit Lake Street and travel west.

Now, you are probably saying: We want light rail, not dinky streetcars. But there’s not as much difference between the two as you might think. The vehicles are pretty much the same, and so is the technology. The conventional distinction is that light rail has its own reserved right-of-way, while streetcars share the road with other traffic.

But many lines mix both. Portland’s light rail, for example, runs alongside cars downtown while the city’s steetcars have segments that are fairly isolated from the street. To work, the Southwest LRT should provide lots of stops downtown and then high speed out in the suburbs, which distances and sprawl make fast travel a must.

Several ideas lie behind the push to develop a rail system in this day and age. People overwhelmingly prefer rail travel to buses. So in theory, a rail line of some kind may lure people out of their cars, reducing congestion and dependence on fossil fuels, which mess up the environment, if not the entire weather system.

Second, a new rail line may draw more intense development. Again, real-estate investors prefer rail to bus because it’s permanent, giving their new building a longer useful life. Concentrating at least some of a city’s housing and businesses along a new rail line would attract more riders, with the same virtuous effects.

The evidence shows that sometimes this happens, and sometimes it doesn’t. Success may depend heavily on design. Arlington, Va.,  for example, managed to attract new riders to the Washington Metro, because according to one report, it “prioritized walkable construction immediately adjacent to subway stations.”

In contrast, Rosemount, Ill., didn’t do as well in connecting riders to the Chicago L because it “put the rail line in the median of a highway, separated buildings from the station by hundreds of feet, and minimized pedestrian amenities.”

My suggested route (and there may be, probably are, better solutions) will no doubt provoke shrieks of horror from many quarters, especially from the engineers and planners who’ve been working on the Southwest LRT. They have all my sympathy. Getting a project of this size and cost off the ground takes Herculean effort, what with all the required environmental impact assessments, cost estimates, legal permissions, government applications, meetings with citizens groups and contract negotiations that they face.

But given the mounting cost of the Southwest LRT, maybe we should rethink whether such a line needs a reserved right-of-way. It would be terrible to spend so much money and possibly wind up with a white elephant. 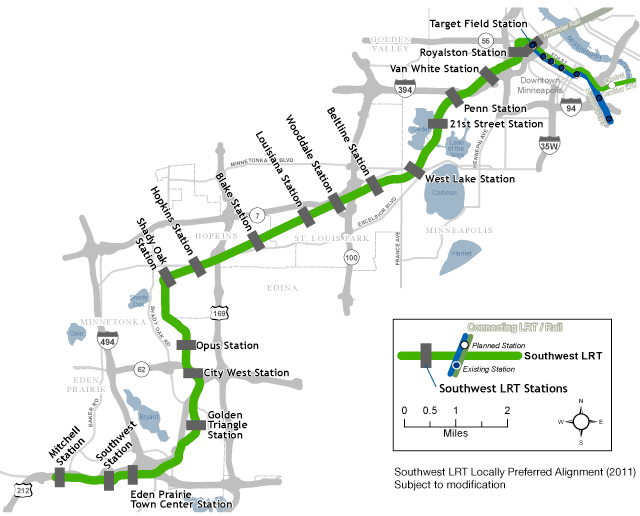