White Bear Lake may look serene, but it’s become the focus of a contentious lawsuit.

And, for now, its future rests in the hands of Margaret M. Marrinan, a Ramsey County District Court judge. She must decide whether to dismiss the complaint filed against the Department of Natural Resources for its role in what looks to the naked eye like the draining of the lake.

The arguments that ensued were ultra-legalistic because neither side has particularly strident disagreements about the condition of the lake itself. Its elevation has declined — though DNR spokesman Chris Niskanen was quick to point out that heavy rains this spring have raised the lake’s level by 2 feet, putting it “within the range of normal fluctuation, which is about 7 feet,” he says.

Maybe so, but the downward drift of the fever line that registers the lake’s depth is hard to ignore. And if you visit, you’ll see the dismaying results — exposed swampy patches stretching hundreds of feet from what once was the shore, and boat docks marooned on dry land. Lakeside homes are lakeside no longer, and Ramsey Beach has been closed for five years because the lower water level puts swimmers too close to an 8-foot drop-off to be safe. Property values have plummeted, and businesses have been suffering. According to the complaint, the lower water levels have “diminished the lake’s value as an irreplaceable recreational, historical, cultural, scenic, and aesthetic asset.”

The plaintiffs are not seeking damages, however. Sitting on a deck at Admiral D’s restaurant, overlooking (from afar) the lake’s breezy blue expanse on a sunny day last week, Greg McNeely, Oliver Din and Bill Axelrod, movers and shakers behind the Restoration Committee, assured me that it’s not about money. They just want their lake back. 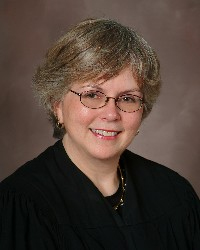 “What we’re trying to achieve is a water management system to maintain the lake’s level and restrict usage,” says Din.

Asserting under the Minnesota Environmental Rights Act (MERA) that the lake is a public trust — a resource accessible to everybody — the complaint asks the court to force the DNR restore it. The department, contends the lawsuit, authorized “a doubling of annual ground water withdrawals in the last 30 years.” As pumping increased, the groundwater in the Prairie du Chien Jordan aquifer underneath was depleted, and lake water was sucked into it. For evidence, they point to a U.S. Geological Survey study completed last year, which found water from White Bear Lake coming out of the faucets in nearby municipalities.

“The DNR has been asleep at the switch,” declared Jan Conlin, arguing for the plaintiffs. If the agency had been more restrictive with water permits allowed to neighboring towns and industry, the lake would look as it did back in 2003.

On behalf of the DNR, Jill Nguyen of the attorney general’s office contended there’s no way the court can or should guarantee the level of the lake “preferred” by the Restoration Association. If it did, the DNR would have to come into court to ask permission or defend its actions every time it issued a water permit. What’s more, the public trust doctrine, in Minnesota at least, does not apply to groundwater, only the lakebed. Finally, she pointed out that the DNR was hard at work on the problem. Among other things, it has commissioned the U.S. Geological Survey to undertake a second, more thorough study. The court, she continued, was not the right forum to find a solution to White Bear Lake’s problems. People with expertise at the Met Council, the DNR, the Legislature and in local communities are better equipped to deal with them.

Judge Marrinan asked when the study would be complete. The answer — some time in 2016 — didn’t seem to make her happy.

From there, arguments wandered into a quagmire as gloppy as anything you could find on the bottom of the lake: the meaning and intent of MERA clauses 103g.285 and 116b.03; Swan Lake (which I thought was a ballet but turned out to be a complicated Minnesota environmental case); a South Dakota court decision about a place called Schiley Slough; and whether the public trust doctrine applies to groundwater.

“We are claiming damage to surface water regardless where it came from,” said Byron Starns who represents the homeowners association.

In the end, the judge took all the studies and briefs to her chambers to sort out. My guess — and it’s only a guess — is that she will let the suit proceed, but only because she asked the lawyers to discuss scheduling with her after the hearing. If she were going to dismiss the case out of hand, why bother? 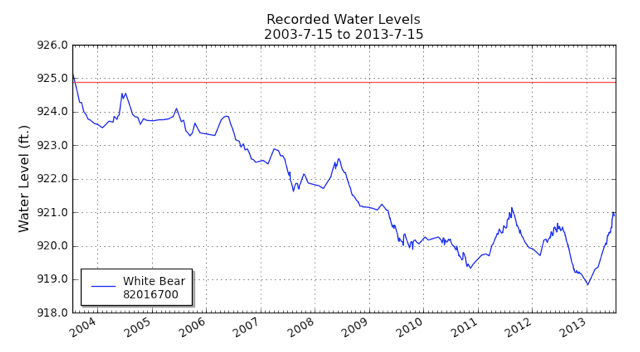 In the meantime, the gears and wheels of a lake rescue operation are slowly starting to grind. The White Bear Lake Conservation District, which regulates recreational uses of the lake, created a Lake Level Resolution Committee, headed by Bryan DeSmet, a White Bear resident and environmental engineer with international and local experience in water and wastewater infrastructure development.

‘We evaluated a number of options,” he said. “First is conservation. That’s the low hanging fruit.”

Already both the City and Township of White Bear Lake are implementing restrictions on lawn watering, and the Chamber of Commerce has begun a “Save the Lake” campaign  asking businesses to take at least four actions to limit water use. “But we don’t know how far conservation will get us,” added DeSmet.

At the behest of DeSmet’s committee, the DNR plans to form the communities surrounding White Bear Lake into the state’s first groundwater management district, which, in theory at least, would limit draws on the water supply to a sustainable level. According to Chris Niskanen, however, the first meeting has yet to occur.

Met Council study gets under way

Further suggestions from DeSmet’s committee are also going into a $2.5 million feasibility study that the Metropolitan Council is just now getting under way. (Money didn’t come in from the Legislature until July 1st.) Keith Buttleman, assistant general manager of environmental services, ticks off the possible solutions to White Bear Lake’s problems: augmenting the lake from the St. Paul system, which gets its water from the Mississippi and has excess capacity; augmenting the lake with “slightly used” water from industry. (Such water, possibly used as a coolant and not contaminated, can be recycled into the lake instead of going down the sewers); optimizing pumping from local wells to make sure that they are efficient; and finally converting communities from drawing water off the aquifer to taking it from surface water, again from St. Paul.

The Met Council plans to finish the study this year; but then it’s up to municipalities, the Legislature and the DNR to do something — and nobody can say how long that will take.

For its part, the White Bear Lake Restoration Association is planning a Lakestock ’13 event (think Woodstock), that will feature local bands and entertainment to raise  awareness of the lake’s plight. But, their lawsuit, if it survives the DNR’s motion to dismiss, could, like all the other rescue efforts, take eons to wend its way to a resolution. The trial isn’t scheduled until next year.

The lake is unlikely to disappear, says DeSmet. The more it drops, the slower the rate of drainage, he insists. (That didn’t make sense to me, but he’s the water expert.) In the meantime, the lake could shrink still further. But he seems confident that the lake will be saved. “A lot of people are working on this,” he says.

Maybe they need to work a little faster.

As White Bear Lake water-level studies begin, a move to dismiss suit against DNR is in judge’s hands